Robert Durst — the notorious subject of the HBO documentary, ‘The Jinx’ — is back in court for his murder trial … after a 14-month break due to the coronavirus pandemic.

Durst just appeared in court, appearing thin and frail with his nose and mouth hidden behind a white medical mask. In case you’ve forgotten … he stands accused of shooting his friend, Susan Berman, in the head at her Beverly Hills home in December 2000 … allegedly because she knew something about the mysterious death of his wife, Kathleen, who disappeared in 1982.

Durst was arrested in New Orleans in March 2015, just weeks after “The Jinx: The Life and Deaths of Robert Durst,” began airing and the LAPD reopened the Berman case.

The docuseries detailed bizarre and disturbing allegations against Durst and chronicled why he was suspected in the killings of Susan and Kathleen … along with how he was acquitted of the murder of a Texas neighbor in 2001.

‘The Jinx’ ended with a jaw-dropping moment in which Durst — believing his microphone was off after excusing himself from an interview — seemingly confessed to murder while talking to himself in the bathroom, saying … “What the hell did I do? Killed them all, of course.”

The documentary also linked a letter sent to police alerting them of Susan’s dead body to Durst. 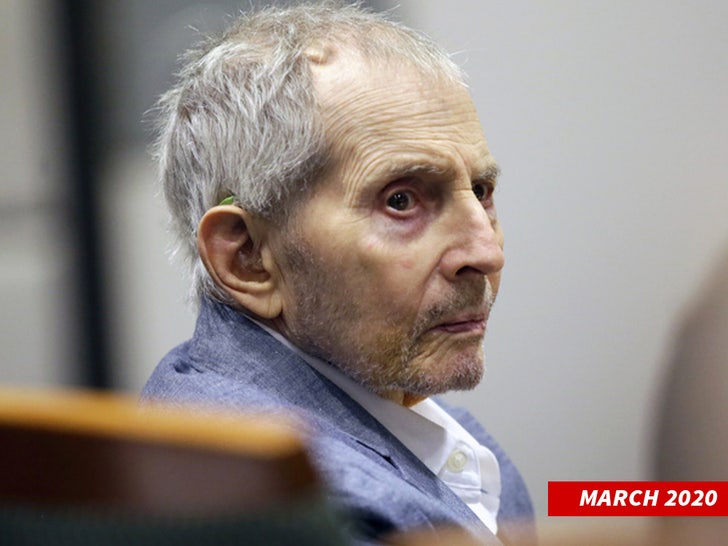 So, he was arrested and charged with her murder in 2015, and though his trial began in March 2020 with a few days of witness testimony … it was suspended due to the coronavirus pandemic. It was originally scheduled to resume in July but was postponed again.

Durst’s lawyers requested an indefinite postponement of the trial earlier this month citing a “myriad of life-threatening health issues” … including bladder cancer that is not being treated.

The judge denied it, and his trial resumed Monday, with Durst finally appearing Tuesday. Before that, Durst was last present for a court hearing back in March of this year.