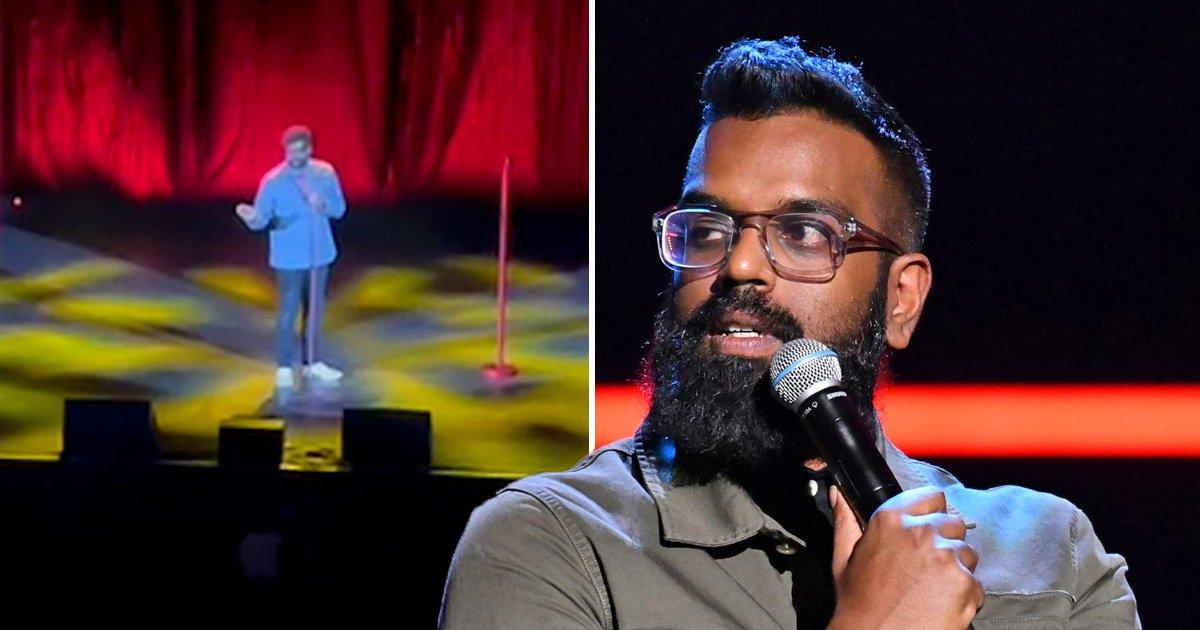 Comedian Romesh Raganathan was reportedly subjected to racist abuse from audience members during his gig at London’s Hammersmith Apollo on Thursday night.

The 43-year-old star had to halt the show while security dealt with a female heckler, who was seen in video footage on her feet in the crowd before guards ejected her from the venue.

While Romesh was seen repeatedly saying ‘I’m sorry’ to punters individually while security dealt with the woman, following her alleged racist rant, the audience cheered and broke into a chant of ‘cheerio, cheerio, cheerio!’ as she was finally removed from the venue.

As she was marched from her seat in the theatre, an audience member near the video source expressed their dismay, declaring: ‘They’re actually being carried out. They’re being dragged out! Oh my god!’

It was the first show back for the comic’s Cynics Mixtape Tour, which was rescheduled from 2019.

Addressing the crowd following the incident, the Weakest Link star commented: ‘Do you know something? Can I tell you something – honestly, I’ve got really mixed feelings about that, because I was finding that very distracting.

‘So I apologise for that, and so I’m glad that’s been dealt with.’

He then joked: ‘But also I’m slightly sad that’s the most excited you’ve sounded all evening!’

A clip from moments earlier in the altercation, obtained by The Sun, sees the comedian distracted by the woman during her heckling – and after the alleged racist abuse – as he addressed her with: ‘Mate, listen, I’m getting distracted. You’re going to have to shut the f**k up. What’s going on?’

The audience member is then seen forcefully gesturing at security guards to move away as they initially try to intervene and shut down the situation.

Throughout, audience members can be heard booing, with shouts for her to ‘get out’.

The Sun reports that the racist abuse started when Romesh made a joke about racism in football, wisecracking: ‘I’d rather be a P**i than a Scouse’, which is said to have provoked a male audience member to start repeatedly shouting: ‘Millwall!’

Millwall FC has been fined before for its fans’ racist chanting, and incidents include a 2019 FA cup match against Everton.

Picking up on the man’s suggested point, Romesh is said to have then remarked: ‘Why are you letting everyone know you are a racist?’, before adding: ‘I don’t actually know you are racist, I am sure you are a nice guy.’

The comedian’s comments are said to have then spurred the woman to ‘start yelling racist abuse’ while standing up and ‘pointing to him’.

The source added that the man had been heard to yell ‘Hip-Hop coconut’, which they branded ‘awful blatant racism’ before commending Romesh for handling it ‘really well’.

Metro.co.uk has contacted reps for Romesh Ranganthan for comment.