‘That was his final wish’: Sean Connery’s ashes spread at multiple ‘secret Scottish locations’ by widow Micheline Roquebrune, 93, on what would have been his 92nd birthday

The Hollywood legend’s widow Micheline Roquebrune, 93, is reported to have made the journey with relatives to privately scatter some of his ashes as it had been his ‘final wish’ to be returned to his homeland.

She had said after his death at their home in the Bahamas in 2020: ‘We are going to bring Sean back to Scotland – that was his final wish. 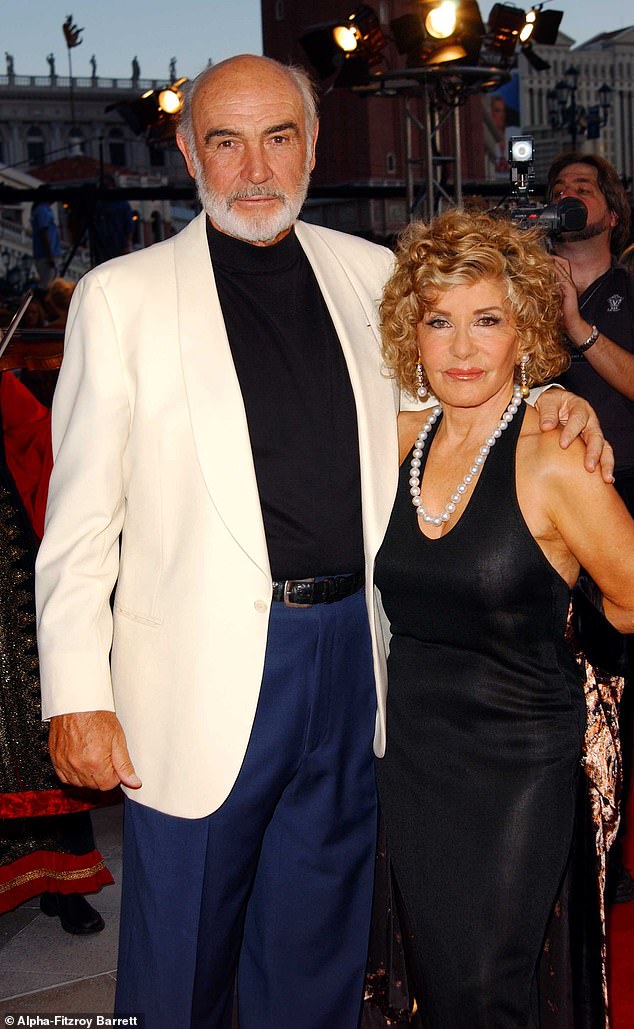 Final wishes: Sir Sean Connery’s widow Micheline Roquebrune, 93, has scattered the Bond star’s ashes across his home country of Scotland to mark what would have been his 92nd birthday

‘He wanted his ashes to be scattered in the Bahamas and also in his homeland.’

Earlier this year she added: ‘He was at his happiest on a golf course so as soon as it’s possible to travel, we will come to Scotland as a family and bring Sean’s ashes.

‘I hope to scatter them on a golf course in Scotland as he always loved playing there.’

Sir Sean’s actor son Jason and granddaughter Saskia are also understood to have made the trip to Scotland to bid a final farewell to the 007 actor. 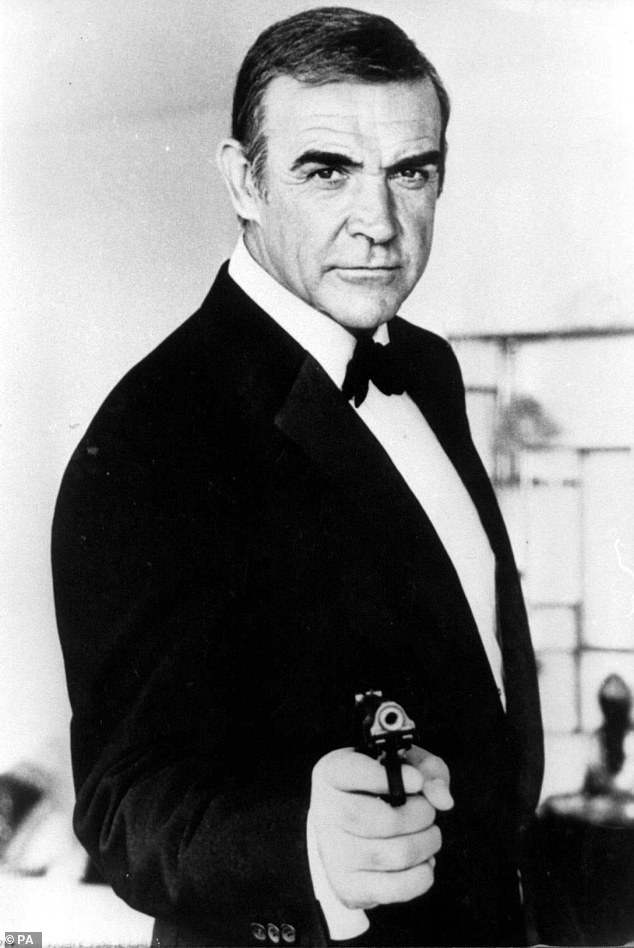 Storied career: Sir Sean had his acting breakthrough in 1957 and went on to become the first James Bond, playing the iconic secret agent in five films between 1962 and 1967 (pictured

Jason, 59, had said in March that they would probably choose St Andrews to scatter the ashes because his father had been a member of the Royal and Ancient Golf Club and had regularly played the famous Old Course.

He said: ‘I have memories of St Andrews always being sunny. It wasn’t, but we had special times there.

‘He was a member of the R&A so I think probably that might be the place.’

The family’s pilgrimage to Scotland concluded with a celebration of Sir Sean’s life at the Dalmeny Estate near Edinburgh, the city of his birth and where he was later granted the freedom of the city in 1991. He died aged 90 in October 2020. 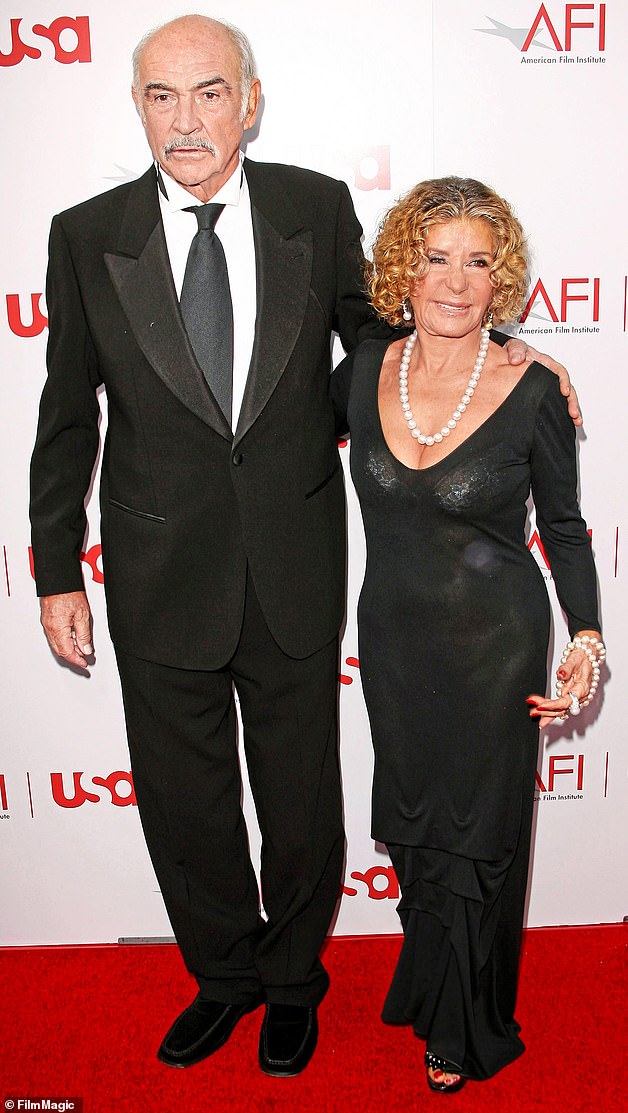 Last respects: The family’s pilgrimage to Scotland concluded with a celebration of Sir Sean’s life at the Dalmeny Estate near Edinburgh, the city of his birth and where he was later granted the freedom of the city in 1991

A 50-strong entourage, all dressed with a glamorous tartan theme, are said to have arrived at Edinburgh Waverley station on board the Royal Scotsman train on Thursday to the sound of a trombonist playing the King of the Swingers.

A source told the Daily Record: ‘I couldn’t believe it when I saw Micheline and her party step off the train.

‘A trombonist began playing the famous song from the Jungle Book. Micheline walked very slowly arm in arm with a relative to her waiting car.

‘She was small and petite but very, very glamorous and she was dressed in a beige cream coloured outfit as if she were going to a wedding. Everyone had on some sort of tartan.

‘We understand Sir Sean’s ashes were scattered at various different points of importance to him in his life. It has all been building up to their final destination which was Edinburgh and Dalmeny yesterday.

‘I thought it was brilliant to see the old-fashioned train and I felt like I was in some sort of movie scene.

‘It was all so secretive because it’s all about Sir Sean’s final resting place.’

The group were whisked away from the station in a fleet of people carriers, and later held a birthday party in Sir Sean’s memory at the Tudor Gothic mansion at Dalmeny.

His granddaughter Saskia shared a touching photograph of herself as a child with Sir Sean, with the words ‘Happiest of birthdays to my superstar.’

Sir Sean was born in Edinburgh on August 25, 1930, and was raised in Fountainbridge, and started out as a milkman before joining the Royal Navy.

He had his acting breakthrough in 1957 and went on to become the first James Bond, playing the iconic secret agent in five films between 1962 and 1967.

His marriage to his son Jason’s mother Diane Cilento ended in divorce in 1973, and he married Micheline, a French-Moroccan artist, in 1975.

He accepted a knighthood from the Queen in 2000 but was also a long-term supporter of Scottish Independence and backed the SNP, despite having lived abroad for many years.

In a 2008 interview, Sir Sean said: ‘Scotland is my home and emotionally I’ve never left.’ 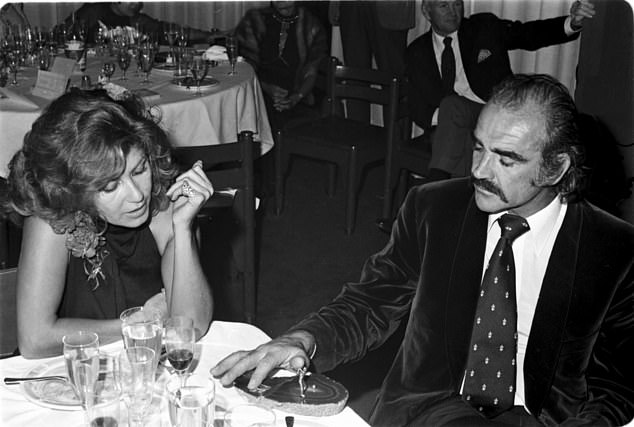 Second chance at love: Sir Sean married Micheline, a French-Moroccan artist, in 1975 after a divorce to his first wife in 1973