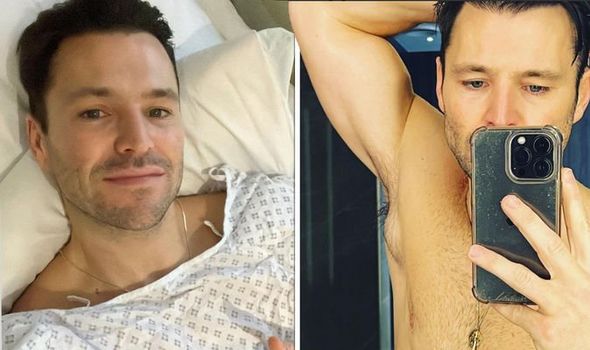 Taking to his Instagram page this evening, The Only Way Is Essex star Mark Wright said a doctor initially said the “fatty lump” didn’t need medical attention. After some time however, he noticed the lump had grown, which prompted Mark to seek further advice.

He explained: “I saw a doctor who passed it on as “a fatty lump that doesn’t need any treatment” so I just left it.

“After some time the lump grew and began to bother me. I am someone that when it comes to life in general, I leave no stone unturned.

“When it involves health, this idiom quadruples.”

After noticing the growth, the 34-year-old decided to get it checked out again.

“He was certain after seeing an ultrasound scan that it was a LIPOMA (a BENIGN soft tissue tumour),” Mark explained.

Due to the size of the lump, Mark said the specialist had concerns it could turn in to a sarcoma (a cancerous malignant tumour).

To find out the exact cause, the reality star underwent an MRI scan.

“This specialist saw the scans around 10 days ago and today I was in theatre having this little g*t removed,” he continued.

The presenter added: “His fast and incredible turn around was due to the fact he did not want to leave it any longer and wanted it out to prevent the rare risk of a Lipoma turning into a sarcoma overtime.

“He also could not 100 per cent confirm by the MRI that this was definitely a benign tumour and not something more sinister.”

The tumour has now sent off for further testing for clarification.

“This top doctor is certain from his incredible experience that we have done the job and there is nothing sinister to worry about. So I’m all good,” he continued.

Mark went on to urge his followers to seek advice if concerned about a lump.