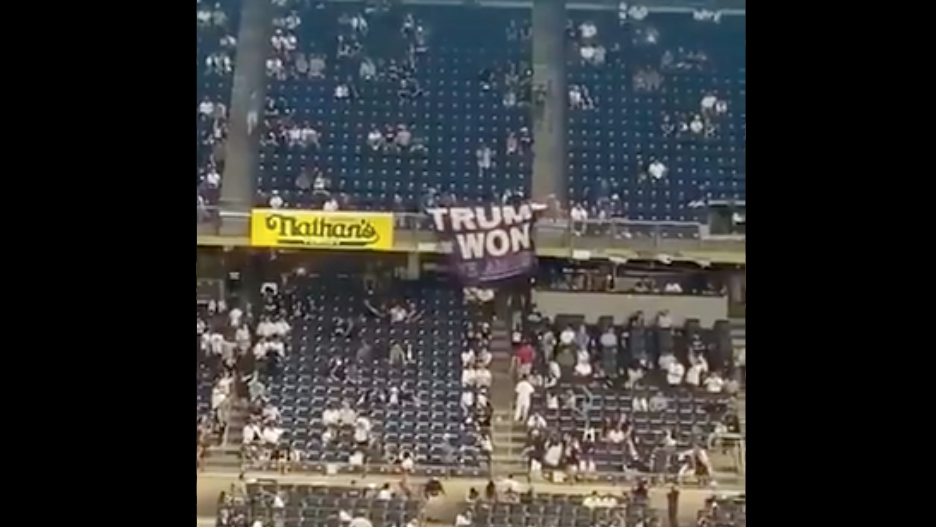 A “Trump Won” banner was unfurled at Yankee Stadium Thursday night while the home team played a game they’d eventually win to the Toronto Blue Jays. (They lost an earlier game to the Blue Jays in a double-header.)

Former president Donald Trump, of course, unlike the Yankees Thursday night, lost his second contest, becoming a single-term president. There were boos from the crowd assembled in the Bronx, audible in the multiple videos of the unfurling posted to social media. In one clip, from Sports Illustrated’s Max Goodman, the banner is snatched up by security, resulting in cheers. 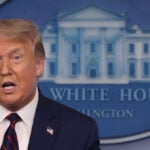 The boos made sense coming from the Yankee faithful, who are such big proponents of fair fights and honest scores that they famously harassed the entire Astros team for more or less the entire game May 4, during the Bronx Bombers’ first face-off with that team since its conviction for stealing signs in 2017. This reporter was on the scene for that showdown and can confirm the noisy and often vulgar hounding of José Altuve and other Astros players lasted through all nine innings. (The Yanks did win the May 4 game, at least.)

Trump and his supporters, from baseball ticket-holders all the way to Republican congress members, have been falsely asserting since November 2020 that now-President Joe Biden’s win was somehow “stolen” or the result of a fraudulent election. That is not true and is known now as the “Big Lie.” In the Bronx, for instance, Biden beat trump with a whopping 83.4% of the vote.

Then-president Trump banked off plans to throw the opening pitch at the Aug. 15 game at Yankee Stadium between the New York Yankees and the Boston Red Sox, though he was leaving the door open for pitching at a later date. According to the New York Times, he hadn’t actually been invited to do that, but had spontaneously announced he would after coronavirus task force leader Dr. Anthony Fauci threw one out at a different game.

“Because of my strong focus on the China Virus, including scheduled meetings on Vaccines, our economy and much else, I won’t be able to be in New York to throw out the opening pitch for the @Yankees on August 15th. We will make it later in the season!” Trump tweeted at the time, before he was banned from Twitter in the wake of the deadly Capitol riot in January, which was also predicated on the false idea that he was the rightful winner of the election.