If you have been drinking too much while looking at pictures of real life (or at least Instagram life), if you spend more time talking to machines than living creatures, if you’ve been wondering if you’re alive, if you have an itch you can’t scratch, if you think you have a condition called accelerating decrepitude, if you live in a building of empty apartments, there may be a movie that speaks to you, and that movie came out almost 40 years ago. It’s called “Blade Runner.”

Since its 1982 debut, “Blade Runner,” set in a phosphorescent, futuristic Los Angeles and directed by Ridley Scott, has tempted fans to see it as coming to life, well, everywhere. The film’s motifs — gorgeously derelict prewar high-rises, the aesthetic influence of Asia’s megacities, massive LED screens — have become visual shorthand for The Future: Down and Out (but Dark and Sexy) Version.

Purists insist that it is a Los Angeles movie, but posts tagged #bladerunner linked to places as disparate as Istanbul, Tijuana, Milan, Nairobi and Detroit typically appear on Instagram every 10 minutes or so.

Few of those places resemble the movie as much as still mostly locked-down Manhattan, where a starker, lonelier, more class-riven update of the film’s retro-noir mood has taken hold. The filmmakers behind “Blade Runner” originally found inspiration in New York, and that was before the city incarnated its post-apocalyptic setting in which “anyone with the wherewithal has presumably gone away,” as Janet Maslin wrote in 1982. “Only the dregs remain.” 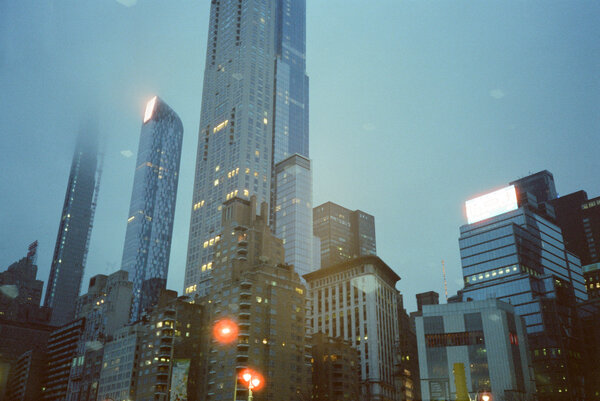 Adrian Benepe, the former New York City Parks Commissioner and current head of the Brooklyn Botanic Garden, sees “creeping Blade Runner syndrome” everywhere, from the clogged skies over Manhattan to the subways, which he rides to work every day from his home on the Upper West Side.

“They’re empty,” Mr. Benepe said. “I’ve been alone many times at rush hour. It’s eerie as hell.” He also finds the movie prescient in its depiction of a world saturated by intrusive, omnipresent advertising.

“Places in New York that used to not have advertising now have ads,” he said. “You can’t get away from it. It’s in the subways, it’s on the streets, it’s on barges. You never stop being assailed.”

Giant screens are nothing new, of course. But New York’s streetscape had been permeated as never before with twitchy, adhesively catchy LEDs, a trend that has only accelerated during the pandemic, with the Metropolitan Transportation Authority announcing last summer the addition of 9,000 screens broadcasting “Covid-relevant safety information.”

“There is advertising everywhere, and it’s a bit of sensory overload,” said Ben Kallos, a City Council member who represents Manhattan’s East Side. Mr. Kallos said LinkNYC, the network of 1,800 sidewalk kiosks around the city providing free Wi-Fi as well as block after block of eye-level digital content, “is pushing the boundary” when it comes to “the amount of advertising people are willing to take.”

That said, for all its complexity and clutter, New York’s visual environment is carefully calibrated by zoning codes and the desire of advertisers not to trigger associations with images such as the “Blade Runner” signature motif of a geisha’s face beaming down from a hovering blimp, let alone the monolithic Big Brother figure in Apple’s infamous “1984” commercial (also directed by Mr. Scott).

Slip-ups happen, however. Last summer, during protests over the killing of George Floyd, marchers who had gathered near Columbus Circle were shocked to see messages from a billboard overhead sternly telling them to go home and “Don’t be a criminal.”

“They were telling people that this isn’t what George Floyd would want, things like that,” said Frederick Joseph, a marketing and communications specialist who is also the author of the recently published New York Times best seller “The Black Friend.”

Mr. Joseph was marching beneath the 32-foot-high digital sign — the only such billboard facing Central Park — and was shocked to see the messages accompanied by the face of Governor Andrew M. Cuomo of New York, along with a misleading Twitter handle. (The Moinian Group, a real estate developer that owns the billboard, did not answer several calls.)

“There was a countdown basically saying how much time before you were past curfew,” Mr. Joseph added. “And when it got to like 10 minutes before, people started running. It felt like something out of ‘The Hunger Games,' or ‘Blade Runner.’”

Not all of the resemblances to the movie are nightmarish. The retro-noir look “Blade Runner” is credited with has inspired copycats, including Anthony Bourdain, who before his death planned to open a “Blade Runner”-inspired “Asian night market” on the West Side of Manhattan, and Raf Simons, whose 2018 men’s wear show on a steamy, neon-lit night under the Williamsburg Bridge featured models in monklike cocoon coats carrying clear plastic umbrellas.

Indeed, one of the subversive triumphs of “Blade Runner” is making techno-fascist dystopia seductive.

“It’s supposed to be terrible, but of course it’s mesmerizing,” said James Sanders, the author of “Celluloid Skyline: New York and the Movies.” Mr. Sanders said that “Blade Runner” originally spoke to a “terror that white middle-class culture was going to be overrun by foreigners.”

Some parts of Midtown are incontestably gloomy, such as along Lexington Avenue in the 40s, where mannequins seem to outnumber humans, space-helmeted bicyclists swerve around heaps of garbage, and like a jellyfish glowing undersea, any gleam of life only underscores the vacuum.”

Just a half-mile south, though, in Manhattan’s Koreatown, the feel is warmer, if slightly edgy, as restaurants have transformed 32nd Street into a vogue-ish outdoor bazaar where you may not feel comfortable unless you’re wearing a neoprene cocoon coat with nozzles for the attachment of heating tubes. It’s not just the diners slurping seolleongtang inside plywood shacks, the cosmetic treatments on offer up glowing stairwells, or the puddles at the diners’ feet (which, although not runoff from acid rain as in “Blade Runner,” may be something worse from nearby Midtown).

Scott Geres is the general manager of the Edison Hotel, a Jazz Age showpiece that opened in 1931, when Thomas Edison himself turned on the 26-story building’s lights. Pixelated models’ faces projected from Times Square flood many of its 810 rooms, including the Presidential Suite, where Aaron Judge, the New York Yankees right fielder, spent the 2018 season.

For the last year, Mr. Geres has been one of the few people at the Edison.

“For the first month I didn’t leave the building,” said Mr. Geres, 48, who walks up to 25,000 steps a day checking for pipe leaks and fire hazards. “There used to be 5,000 people in this building on a Saturday night. Now it’s just me and one other person on my team.”

Mr. Geres said his job is to keep the Edison’s lights flickering behind the plywood shielding windows on the Rum Bar and street-side restaurants. The 700-room Paramount hotel, across West 47th Street, however, is “dark dark,” he said, like so many buildings in Midtown.

“Dark dark” is of course the psychic state of much of New York these days, and of Rick Deckard’s mind. In “Do Androids Dream of Electric Sheep,” the 1968 novel by Philip K. Dick on which “Blade Runner” is based, Mr. Deckard is tormented by empty apartments — “sometimes he heard them when he was supposed to be asleep.”

Childless, communicating via “vidphone,” and drinking himself into oblivion (with Vangelis’s blissfully narcotic score playing in the background, who wouldn’t?), Mr. Deckard spends his time when not hunting fugitive robots — whose vivacity is a rebuke to his own shrunken soul — looking at pictures from before times, specifically, snapshots of possibly imaginary family members.

It’s an on-the-nose image of loneliness and lassitude for those “living in the screen bunker,” as the pop psychologist Rob Henderson has called pandemic life. Meanwhile, outside the bunker, intimations of creeping disorder conjure the city of the 1970s, one of the main inspirations for “Blade Runner.”

“I was spending a lot of time in New York,” Mr. Scott has said of the movie’s filming. “The city back then seemed to be dismantling itself. It was marginally out of control.”

At that time, Mr. Scott frequently found himself flying directly to Midtown via a helicopter service from Kennedy Airport that would land atop the former Pan-American (now MetLife) Building straddling Park Avenue. Not long afterward, following a grisly accident, the helicopter service was discontinued.

Mr. Benepe sees helicopters as another way “Blade Runner”speaks to the moment.

“In ‘Blade Runner’ you have this overhead traffic constantly circling overhead,” he said. “Well, now the ultrawealthy, not only are they no longer in mass transit with us, they’re not even on the roadways. They’re flying in from the Hamptons.”

He pointed out that the helicopter charter service Blade recently announced a daily commuter run, set to begin this month, shuttling passengers to Manhattan from Westchester.

“Blade Runner”’s class critique is not subtle. A sex worker hunted by Mr. Deckard tries to kill him with his tie. The movie’s arch-villain, the head of an evil biotech corporation, lives at the pinnacle of a Pharaonic temple, and apparently he’s the only character in the movie whose apartment gets sunlight.

That home, towering above the city, is as spacious and warm as the other interiors are dismal and claustrophobic. Though, in one of the ways “Blade Runner” seems dated, compared with Pharaonic apartments in Manhattan nowadays, its proportions are not extravagant.