Brad Pitt smolders in his new photos for Brioni’s Spring/Summer 21 menswear campaign. He lies against a bed in his sexiest snaps yet for the label.

Here’s another reason to celebrate the impending arrival of spring and summer, as Brad Pitt‘s SS/21 campaign photos for the luxury Italian menswear brand Brioni have been released. In them, the always handsome Oscar winner can be seen bathed in light coming into a room at the legendary Chateau Marmont in Hollywood. Brad’s laid-back effortless style is on display, as he lounges his fit frame across the floor while propping his back up against the silk sheets of a bed, giving off a seriously sultry look.

The 57-year-old is hottie seen with his left arm raised behind his head to push back his dirty blonde locks. He gazes into the camera with his exquisitely handsome face, while raising his left leg off the ground slightly at his knee. Brad can be seen with accessories including several bracelets on his right wrist, including one with silver beads. He also wears a chunky gold ring on his right hand. 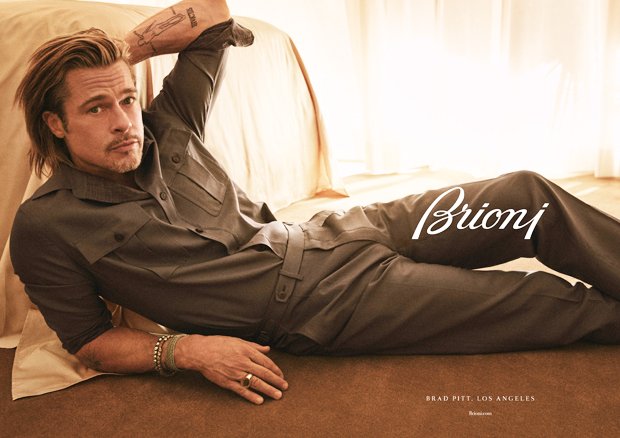 In a statement from Brioni upon the release of the campaign’s photos on Mar. 17,  the label noted that “Pitt embodies the Brioni man: he radiates a modern yet timeless magnetism and charm.” In the photos, Brad is seen wearing the “Vagabond” overshirt in “double face cashmere and the feather-light silk blouson in washed silk. They embody the House’s sophisticated notion of refined simplicity and style.” Brad’s matching trousers fit him perfectly, with a slight side-button waist band in place of a belt.

In a second photo, Brad is seen sitting in a brown leather chair and putting his combat-style boot covered feet up on a table. His outfit is less tailored than the first, wearing a tan shirt again rolled up at the sleeves and matching pants. This time he’s gazing off into the distance, while holding his right arm back and behind his head. Can this man get any hotter? 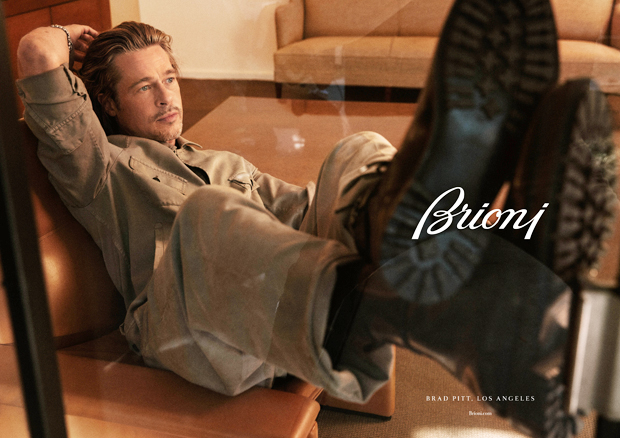 Brad has long been a fan of the luxury Italian brand. He wore a bespoke Brioni tuxedo and bow tie to the Cannes Film Festival premiere of Once Upon a Time in Hollywood in May 2019. Six months later on Nov. 18, 2019, the Rome-based label announced that the hunk had become their brand ambassador. In an announcement on their Instagram page, Brioni revealed “An icon of cinema and style, Pitt embodies and reinforces Brioni’s bond with Hollywood.”

Brad previously starred in Brioni’s Spring/Summer 2020 and Fall/Winter 2020 “Tailoring Legends” advertising campaign, which was also shot in Los Angeles. The classic black and white photos featured Brad in the label’s Virgilio suit and Travel jacket, among other ready-to-wear and evening wear items. Many of the photos were more like portraits of the actor in the stylish outfits. Brad’s latest campaign with more casual clothes in color photos while sprawled out in a hotel room by far are his sexiest yet!