There is no better poster girl for the glamour of Gucci than the spectacular Salma Hayek. After marrying the CEO of Kering (the parent company of Gucci), François-Henri Pinault, on Valentine’s Day in 2009, the actress has pretty much never worn another designer since. In honor of the release of her film “House of Gucci” on Nov. 24, 2021, we’ve lined up all of the most sumptuous luxe that is Salma wearing the brand. Here, she shimmered like a golden goddess at the U.K. premiere of the flick in November 2021. The gown is Grecian, it’s luxurious — and it’s tailor-made to Salma’s eternal style.

At the 10th Annual LACMA Art+Film Gala in November 2021, Salma Hayek was nothing short of captivating. Dripping in sequins, she dazzled in this ombré strapless Gucci perfection.

RELATED: All the fashion hits and misses from the 2021 CMA Awards in Nashville

In an unexpected splash of pink, Salma Hayek was absolute eye candy at the LACMA Art+Film Gala in 2015. The red accents and nails were a fun surprise pop of color too.

RELATED: The best and worst celeb street style of 2021

With a Peter Pan collar and demure bow, this wasn’t one of Salma Hayek’s sexiest moments, but the color combination and delicate beading of this Gucci gown was an overall intriguing win for the actress at the 2017 Cannes Film Festival.

At the “Carol” premiere during the 2015 Cannes Film Festival, Salma Hayek strolled onto the red carpet in a deeply plunging and deeply purple Gucci gown. It was epic in its simple, sexy elegance.

Artsy sequined blue was the ultimate stylish turn for Salma Hayek at the 2017 LACMA Art+Film Gala. With a hip-grazing bow and asymmetrical shoulder, this dazzling number is one of her finest.

Salma Hayek strolled into the British Fashion Awards in 2016 in brocade, flutter-sleeved Gucci perfection. Her massive diamond necklace added a mega-dose of luxe.

At the 2016 LACMA Art + Film gala, Salma Hayek went for an ornate chiffon dream of a Gucci gown. With embroidery and beading, this is one of her most unique looks of all time.

For the 2020 Vanity Fair Oscar Party, Salma Hayek wore a teal mid-length sequined Gucci stunner. It was a more casual approach than we’re accustomed to seeing on her, but it remained fresh and welcome.

For the 2019 Met Gala, Salma Hayek went for an over-the-top gilt-goddess vibe. With appliqués, beads, rhinestones and even a gold leaf crown, the “more” approach was wildly stylish.

Simple elegance reigns supreme in this Gucci look that Salma Hayek chose for the 2014 LACMA Art+Film Gala. The tailoring was impeccable and she couldn’t have worn it better!

In 2013, Salma Hayek channeled old Hollywood at the LACMA Art + Film Gala. She was an absolute vision in a creamy white chiffon gown with a cinched, embellished waist.

Salma Hayek arrived at the LACMA Art+Film Gala in 2012 in a stellar LBD with one-shoulder and a cascading floor-length ruffle. A topknot and a large diamond bracelet completed this effortlessly glam perfection.

At the Los Angeles premiere of “Savages” in 2012, Salma Hayek radiated beauty and confidence in an emerald floor-length Gucci gown.

This is perhaps one of her most unforgettable moments in Gucci: Salma Hayek chose a ’70s-inspired strapless beaded frock for the 2012 Golden Globe Awards. The gold-and-black gown made her one of the best dressed stars on the red carpet that night.

At the Cannes Film Festival in 2010, Salma Hayek was the ultimate picture of a movie star in a glamorous blush Gucci gown with gold accents.

It was a very on-brand and chic moment: At the 2020 Academy Awards, Salma Hayek wore a regal white asymmetrical one-shoulder gown. We love how her diamond wrap bracelet echoes the long chiffon fabric on the opposite side.

Salma Hayek entered the Kering Women In Motion Awards at the 2021 Cannes Film Festival in true-blue fabulous form. The placement of varying shades of the hue on her Gucci gown gave the dress serious curve appeal! 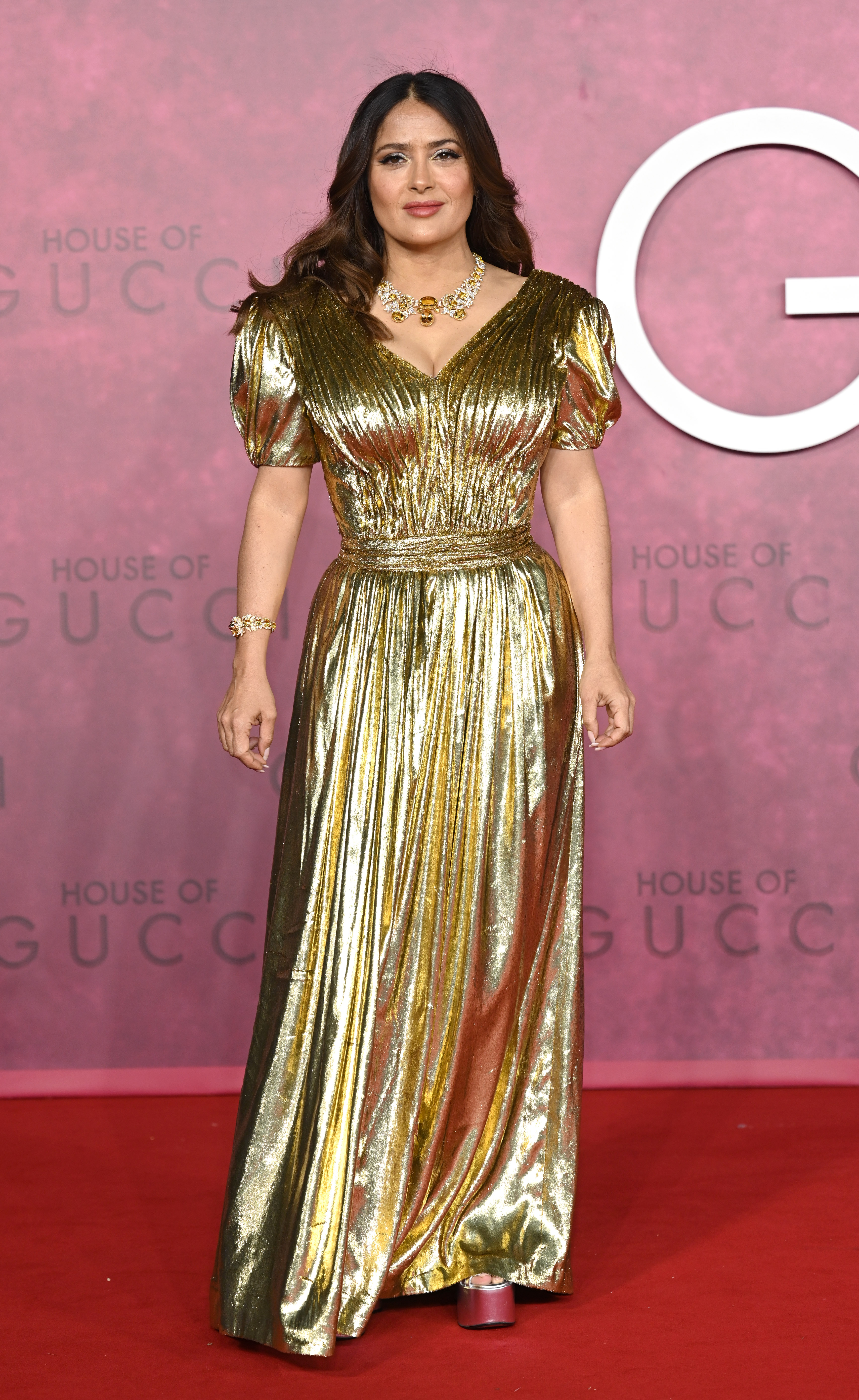 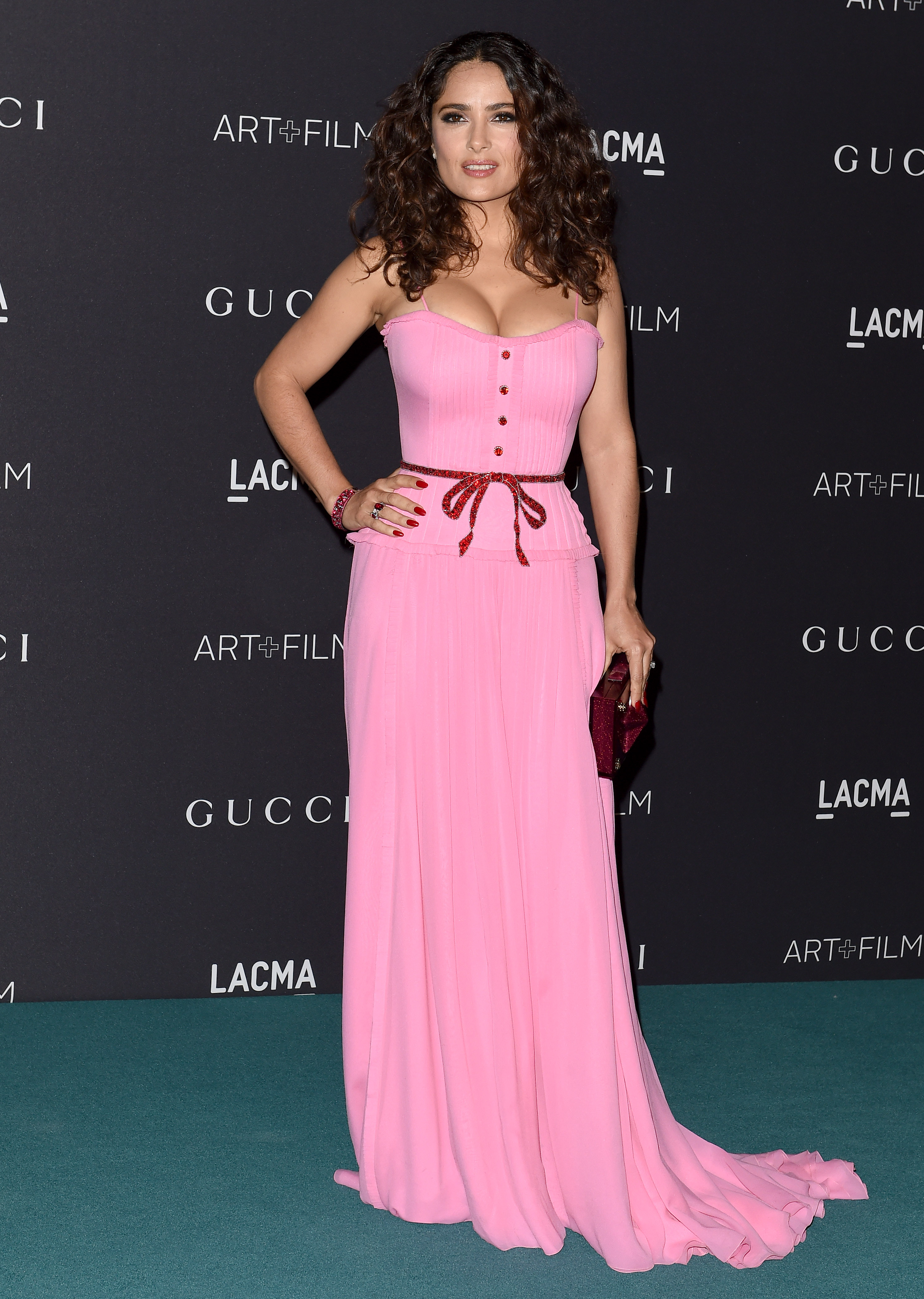 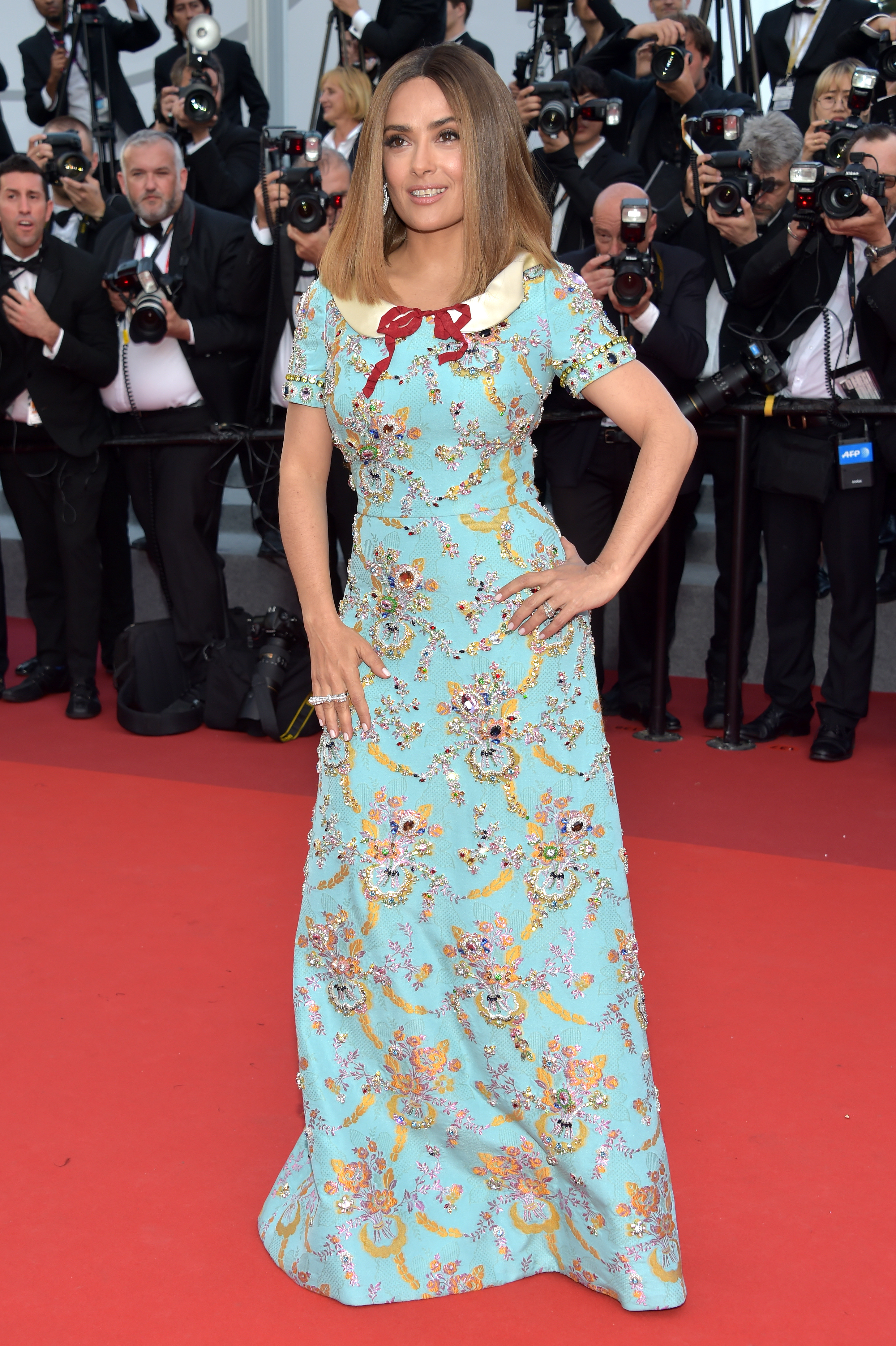 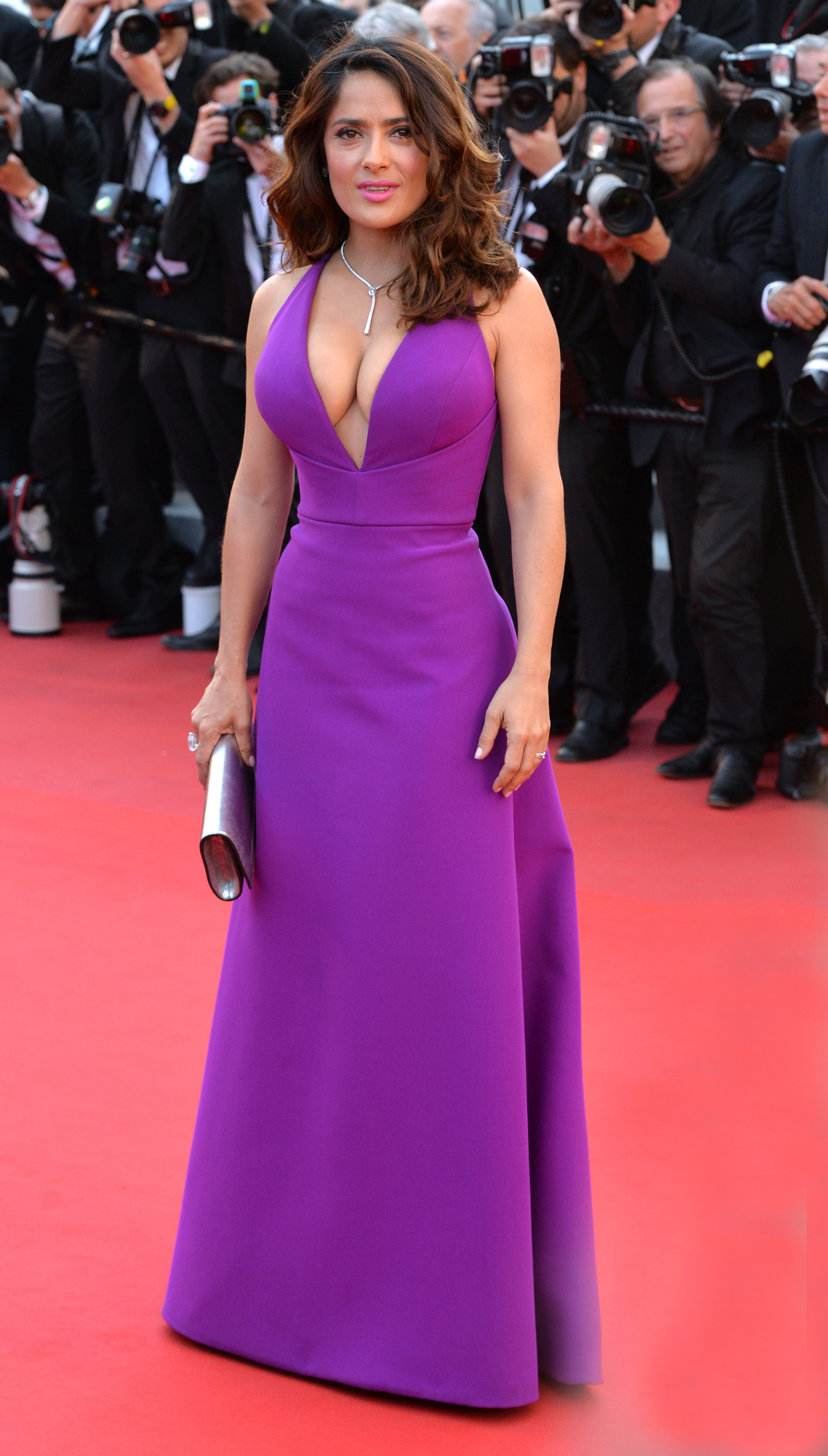 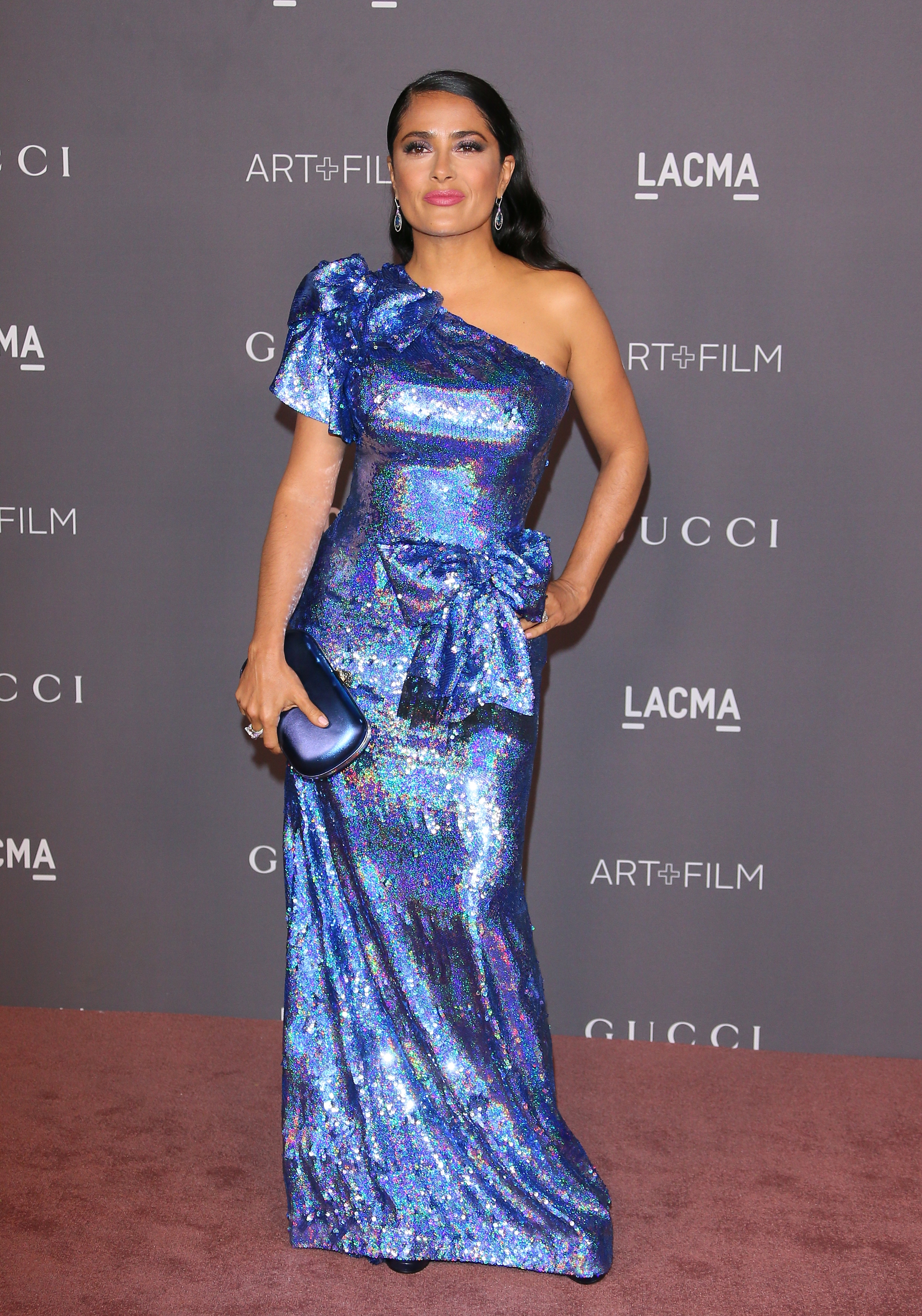 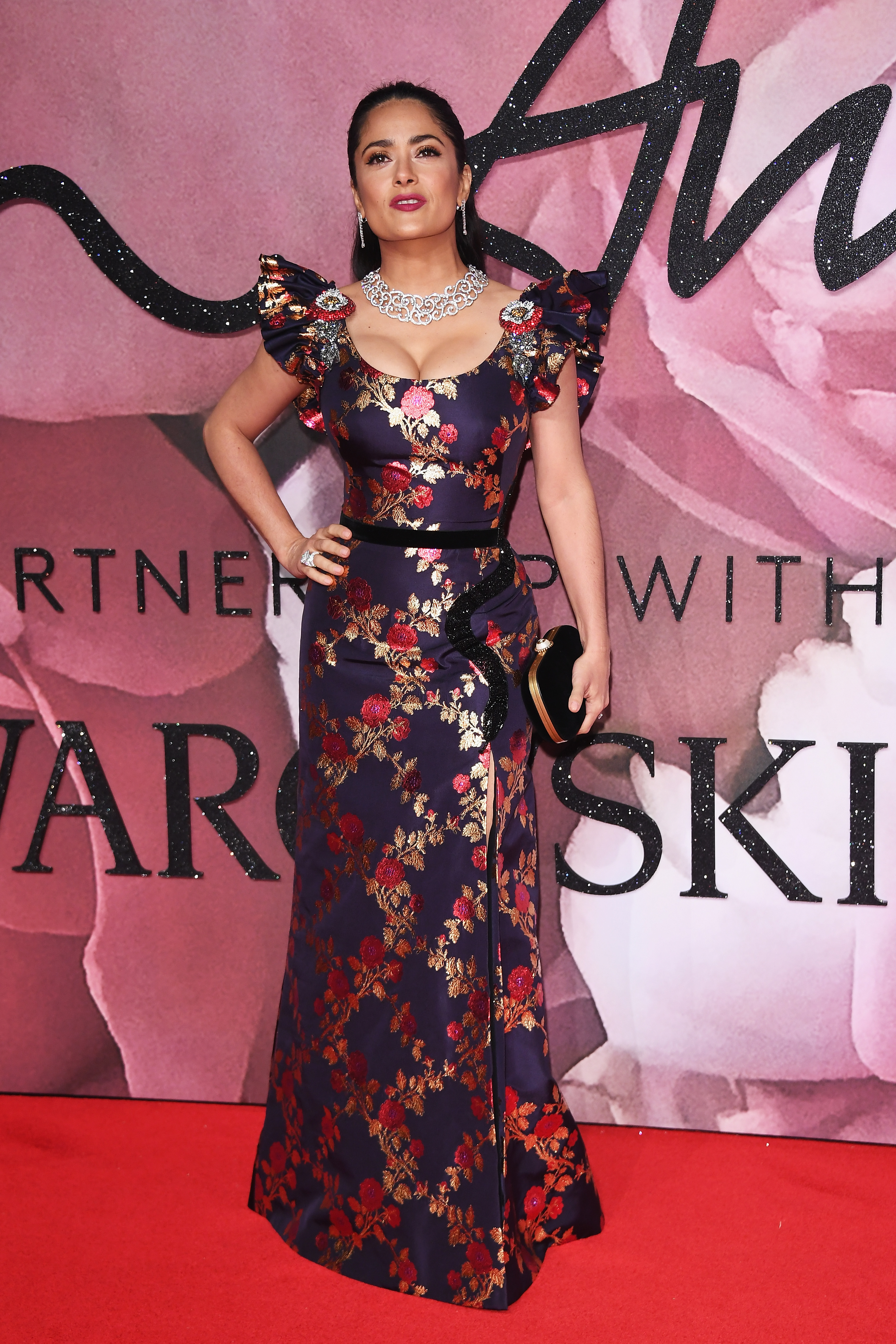 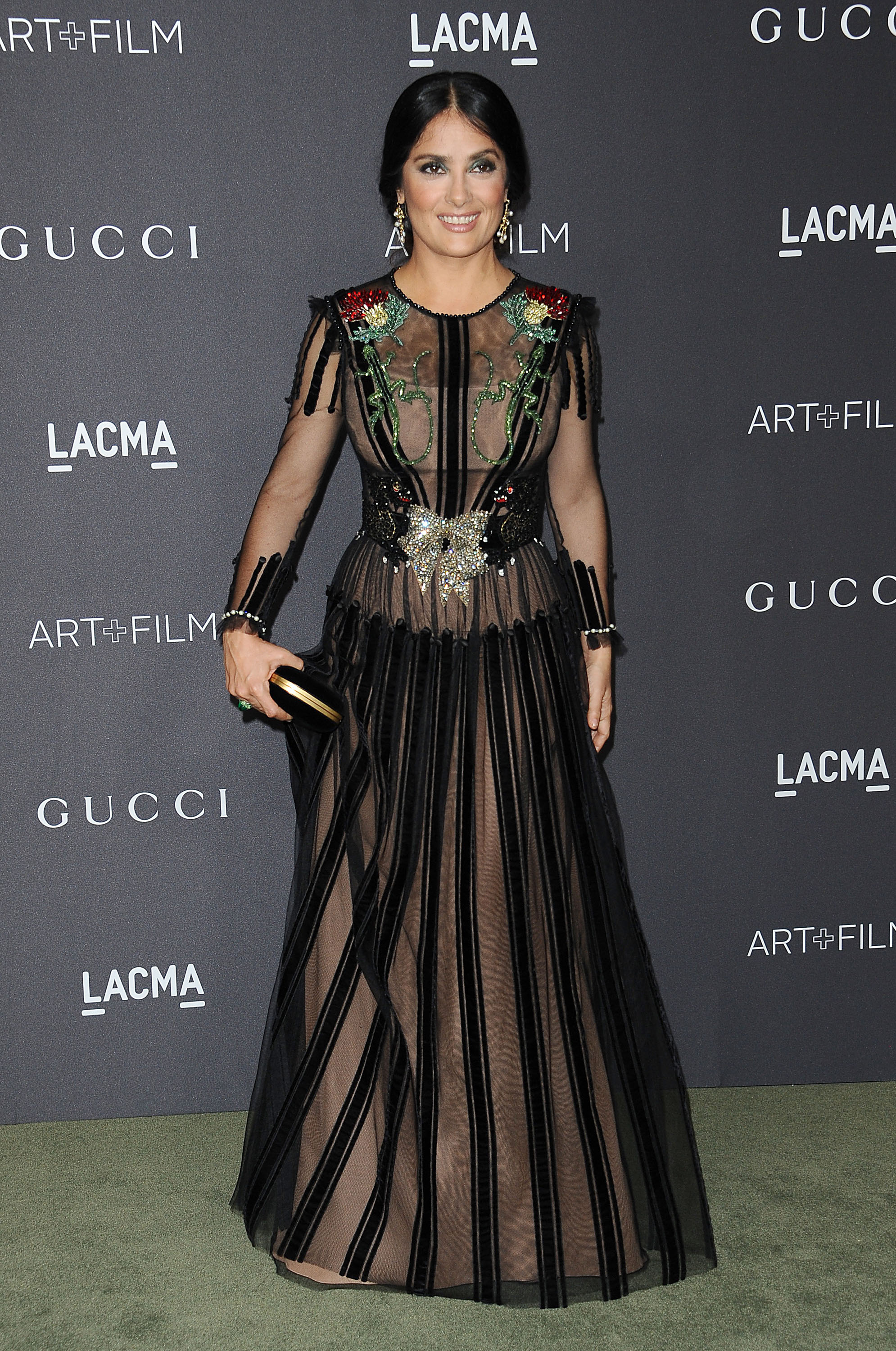 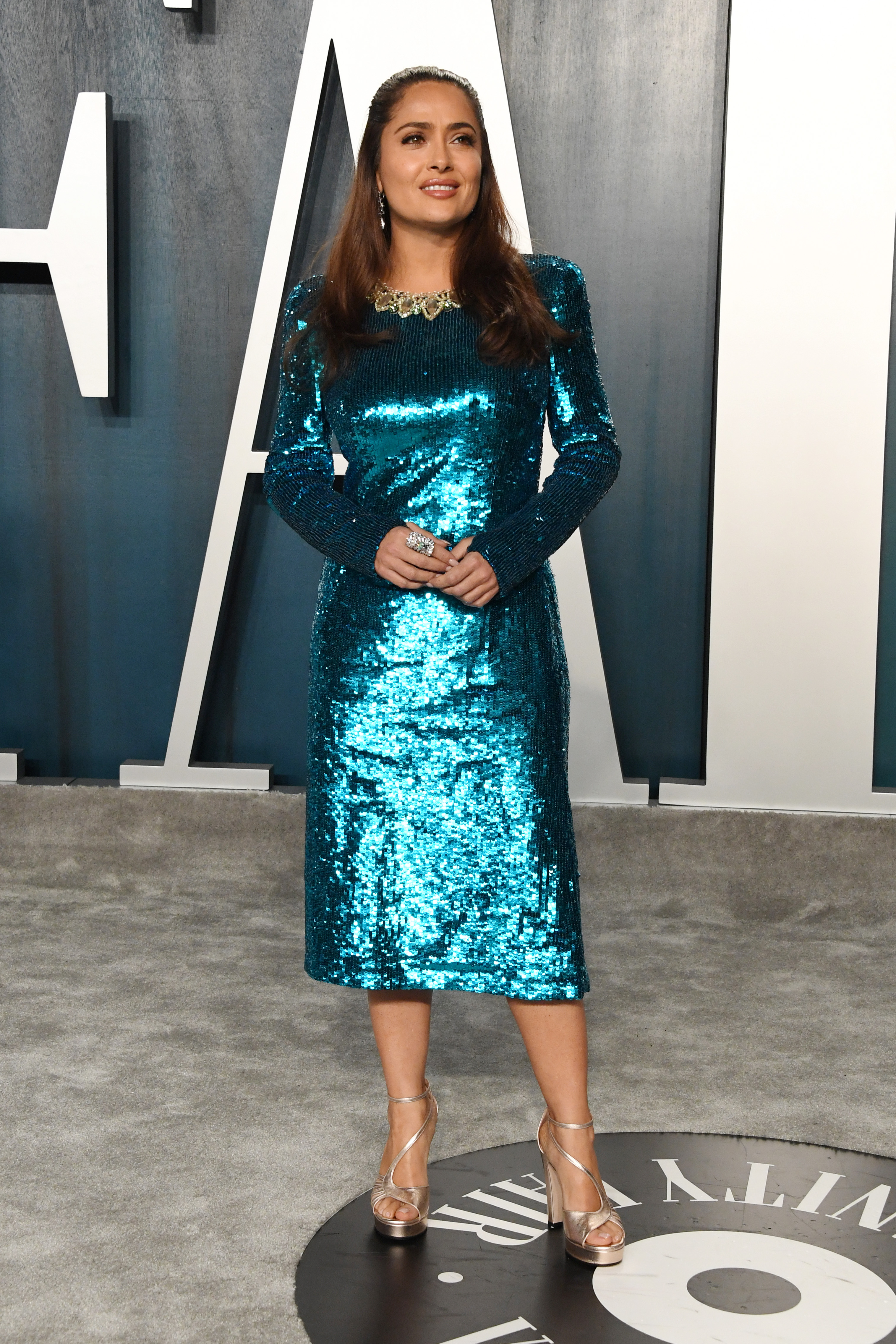 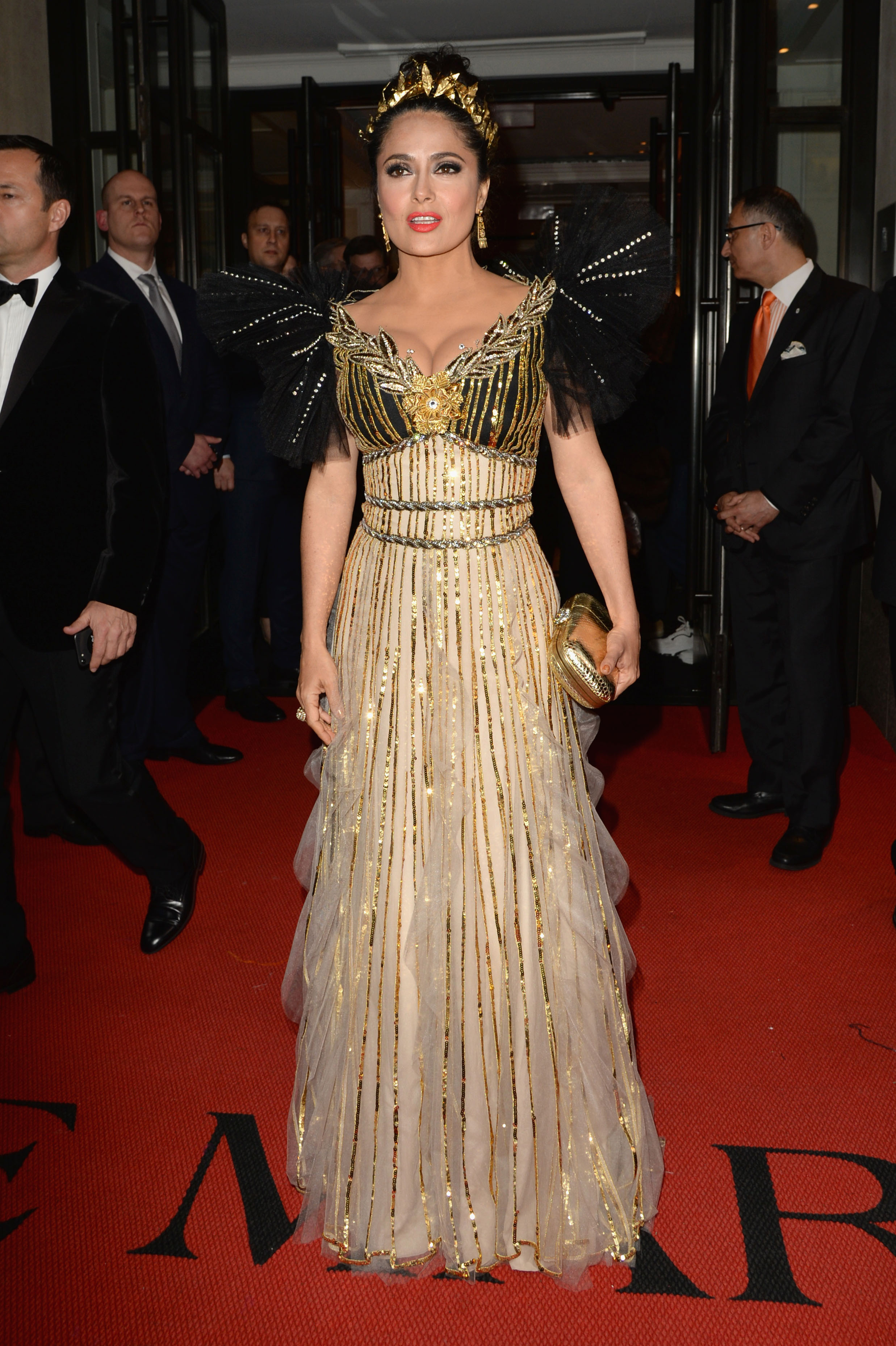 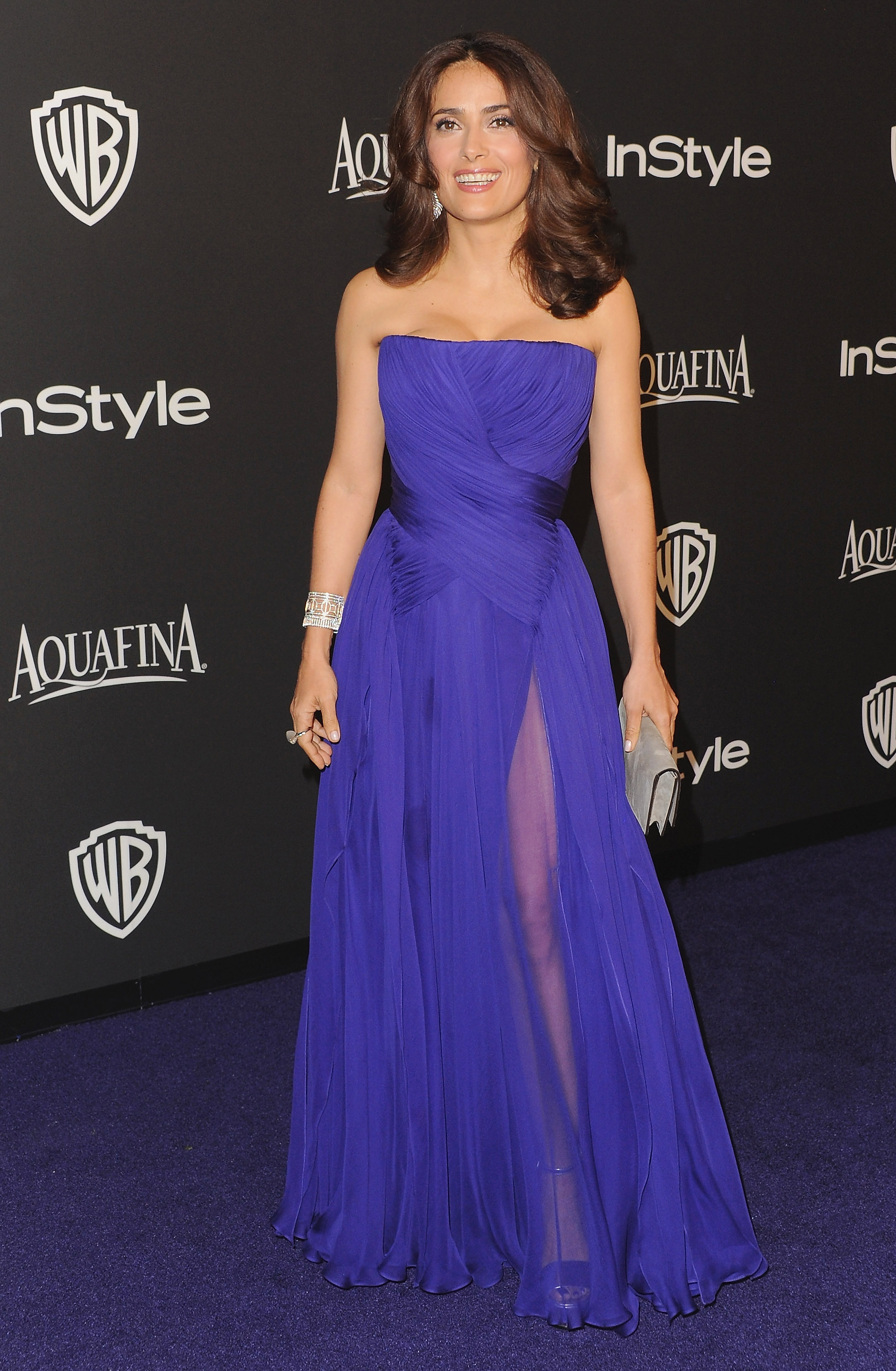 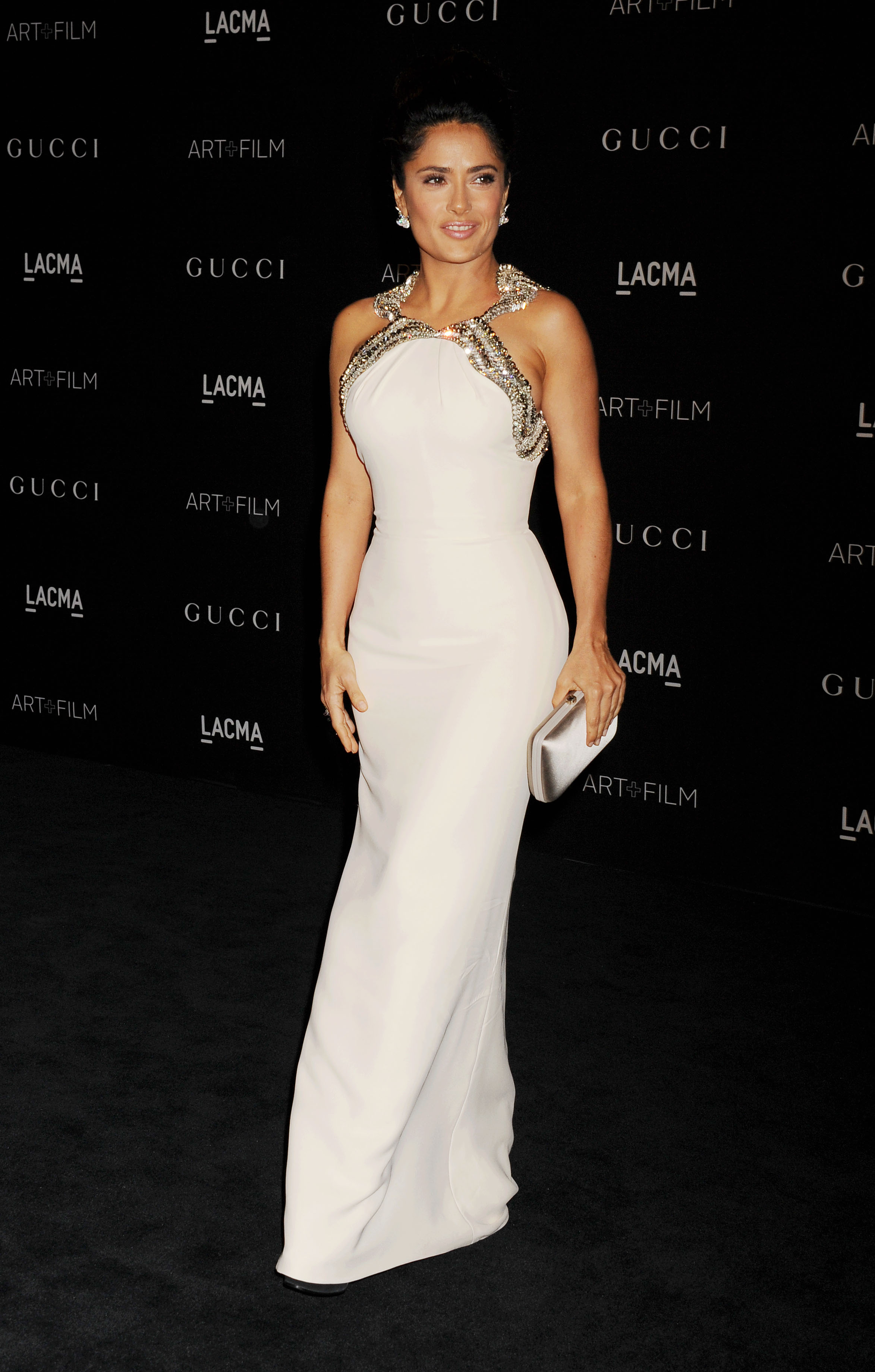 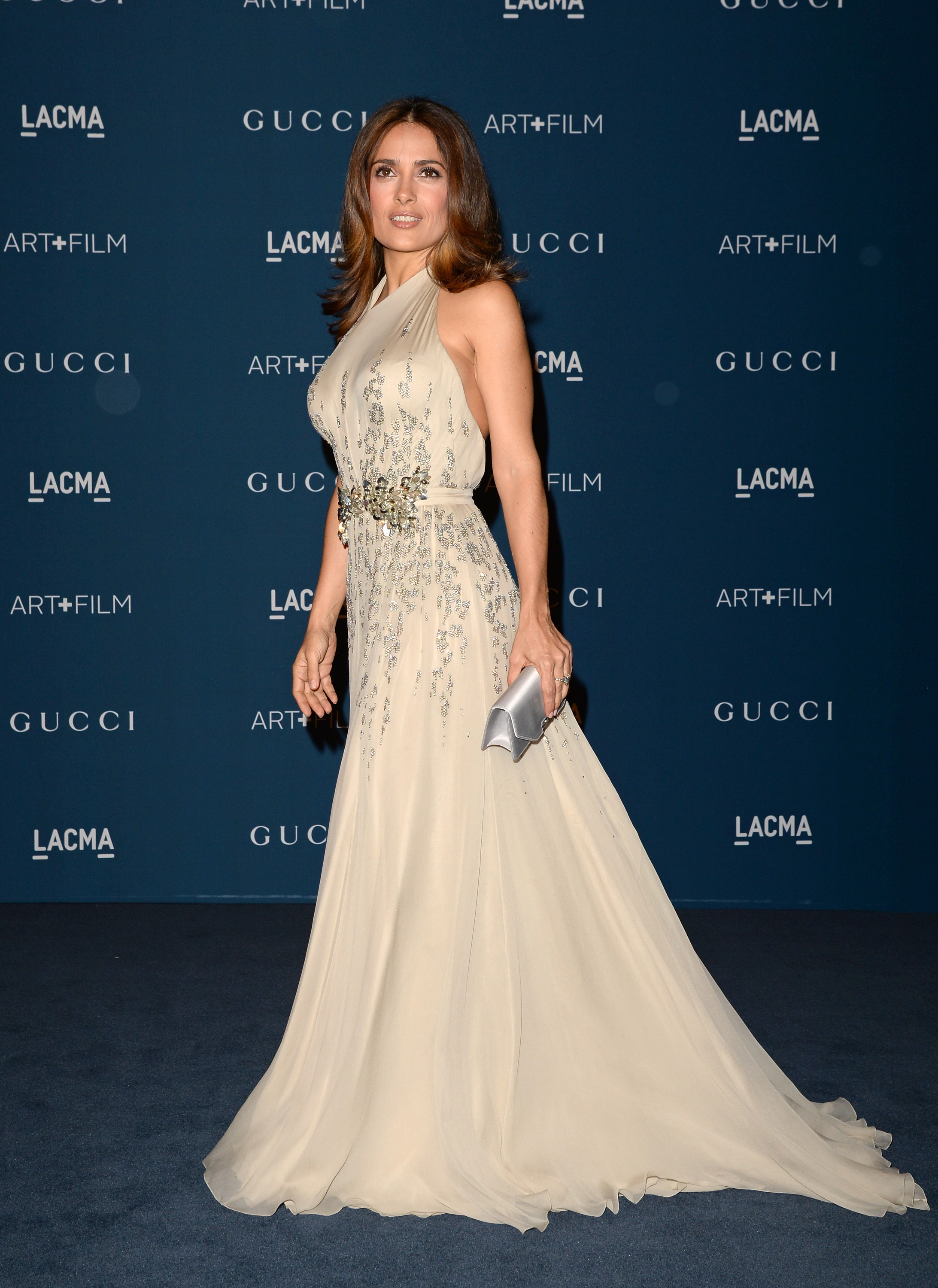 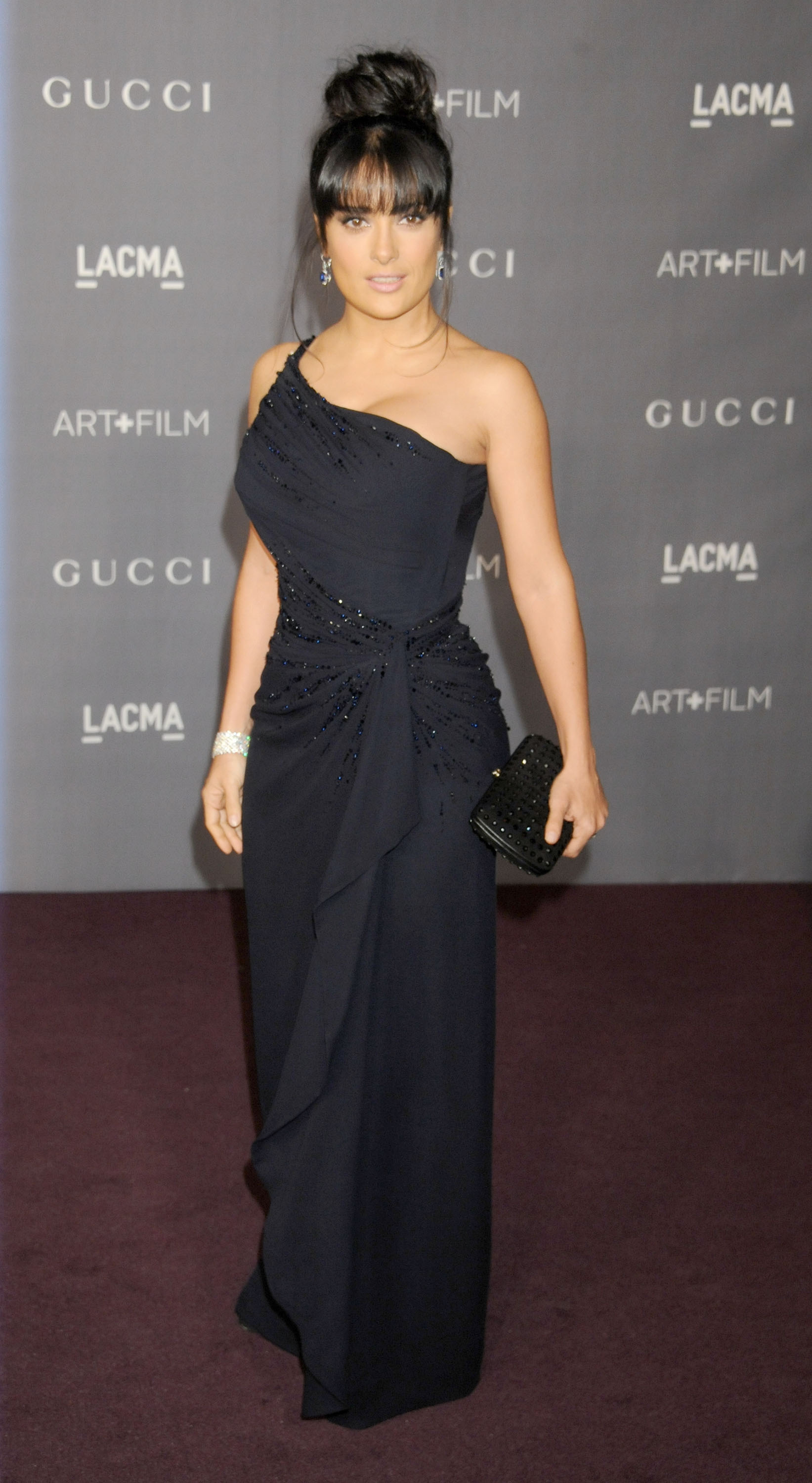 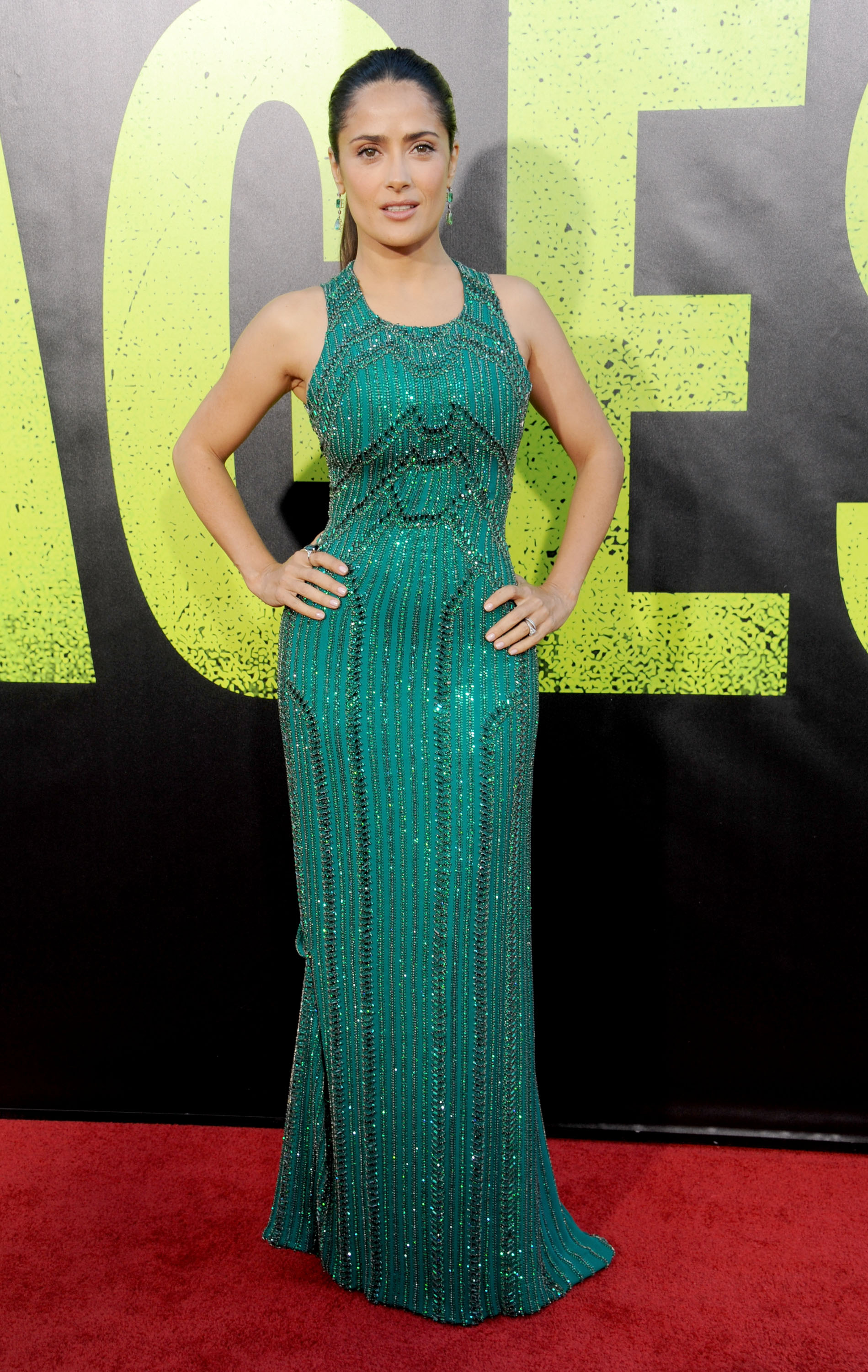 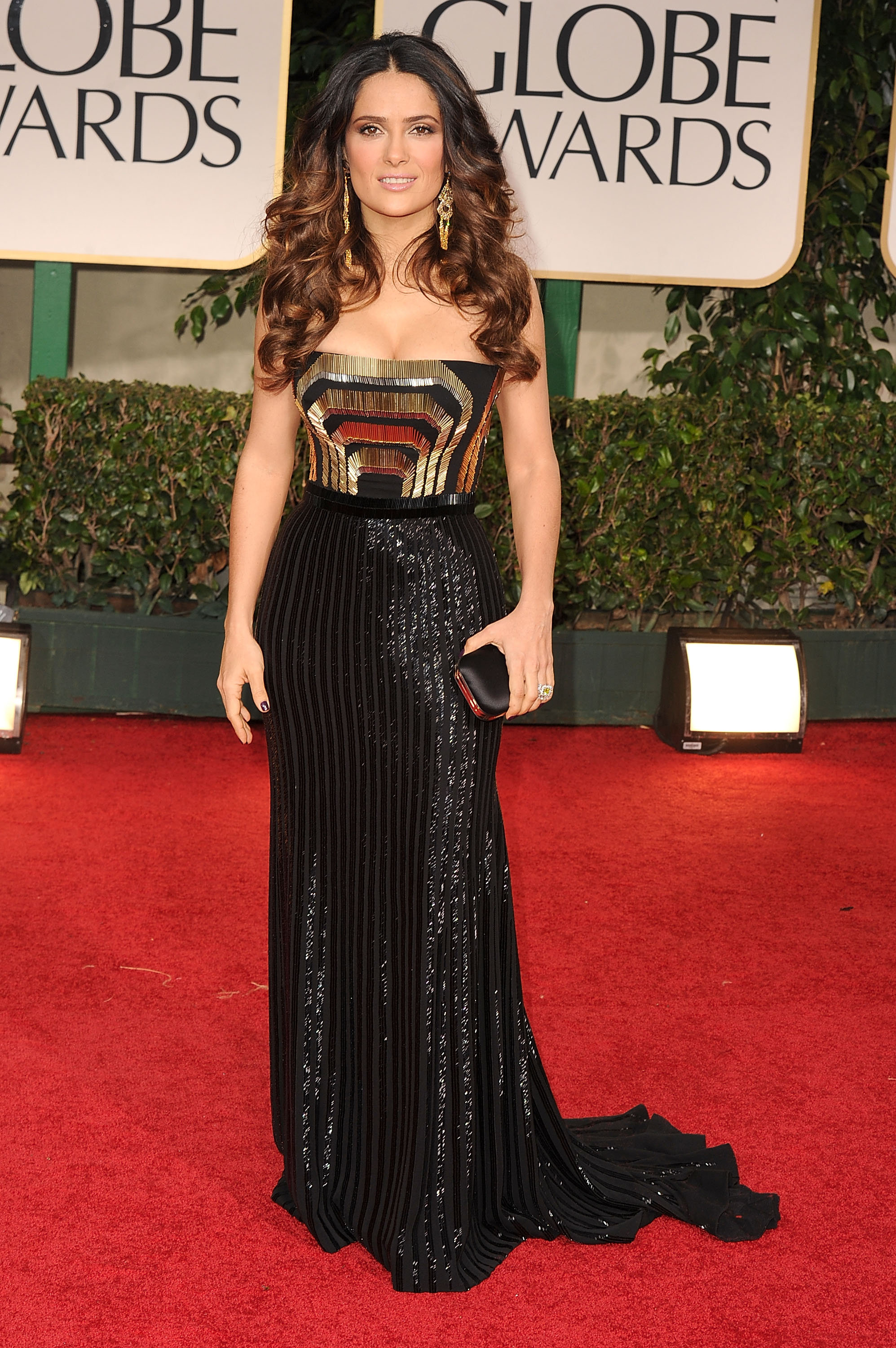 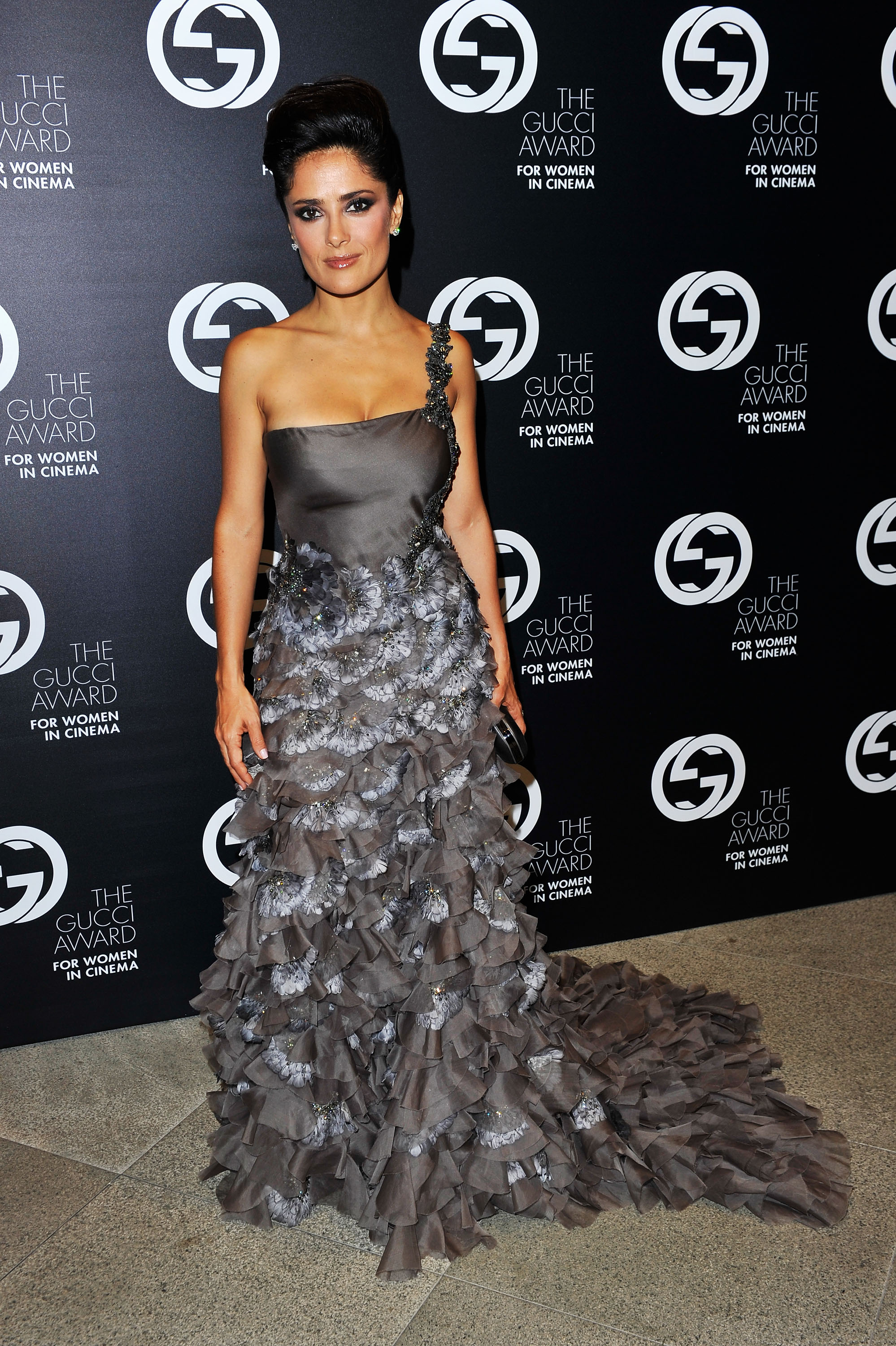 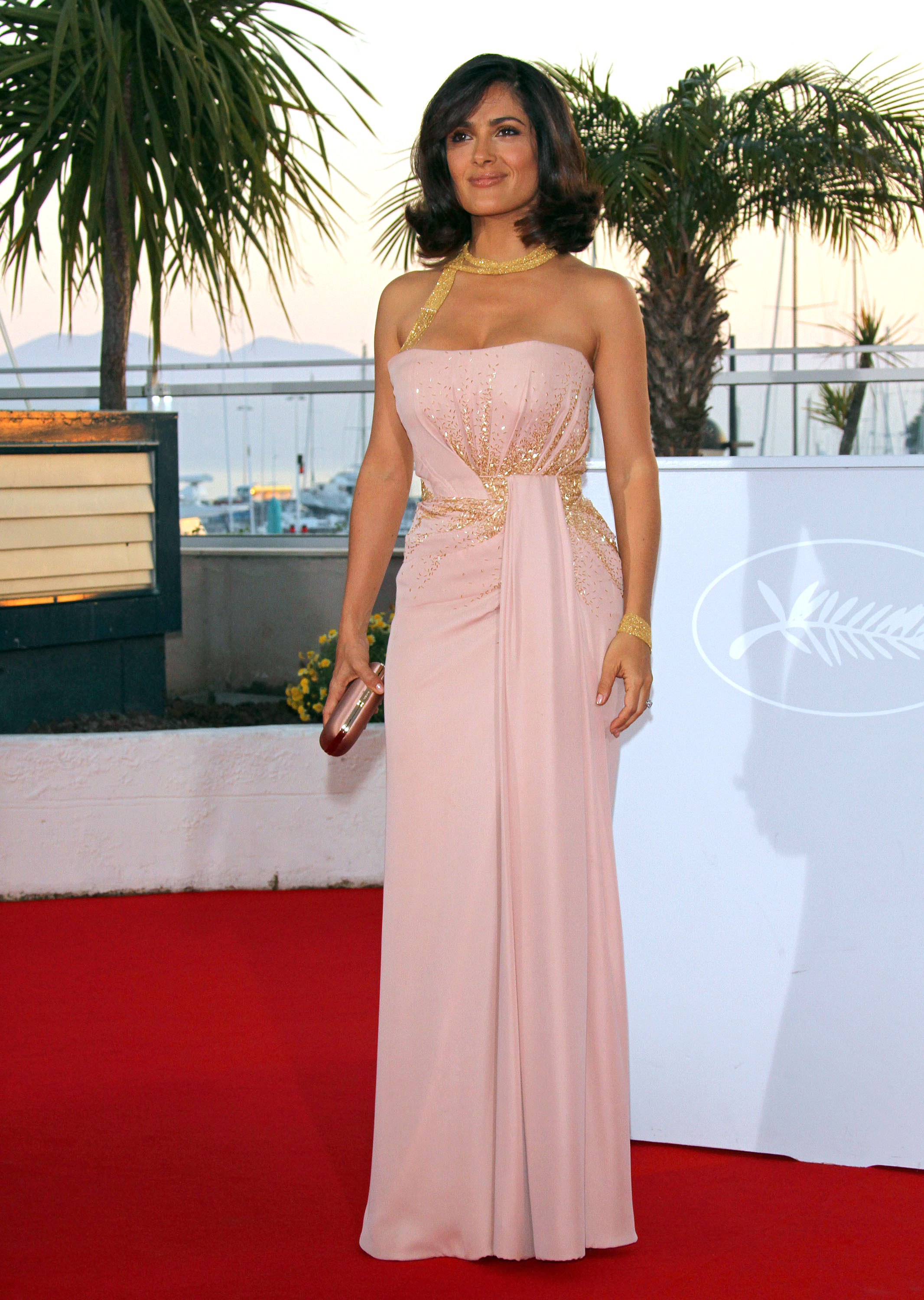 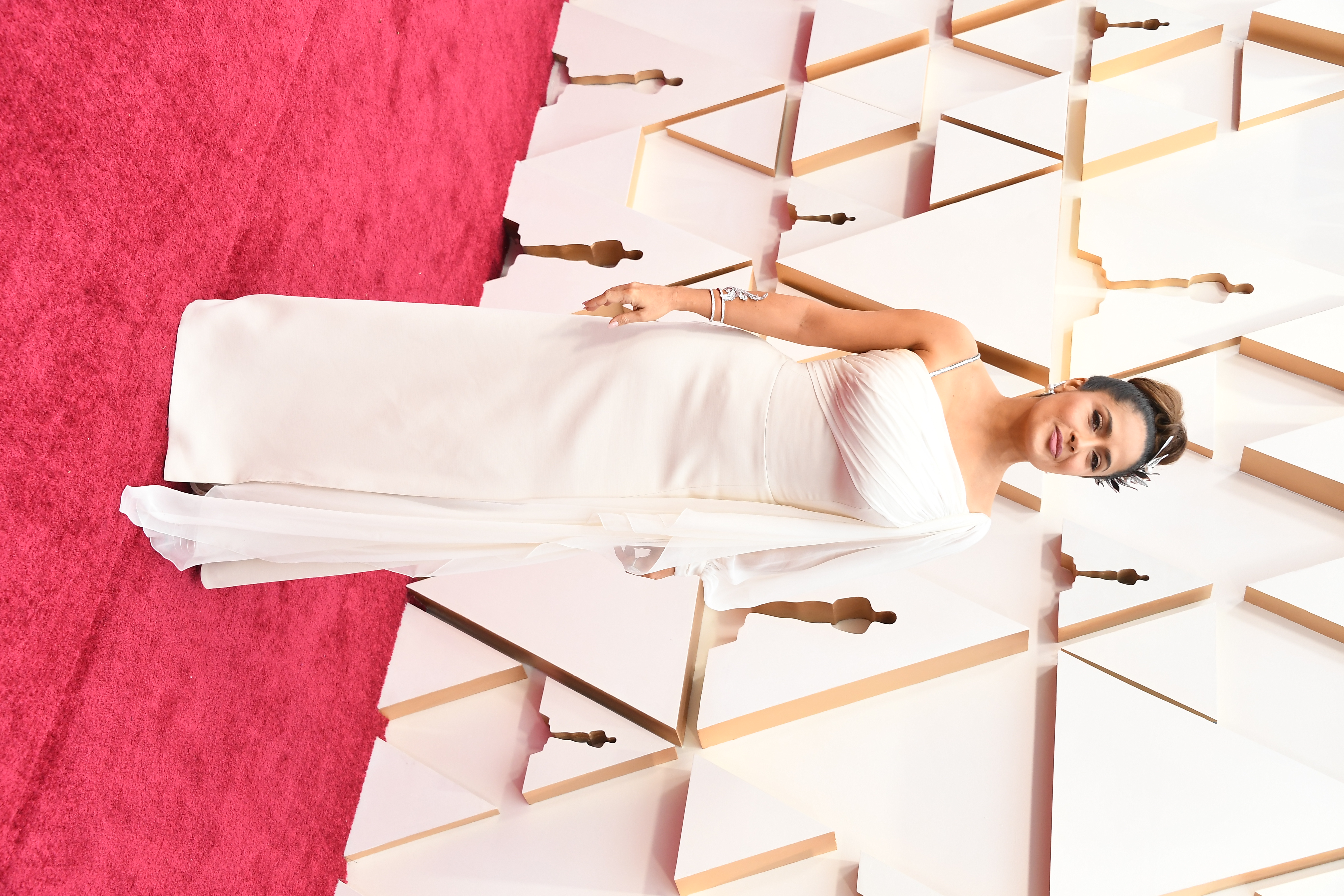 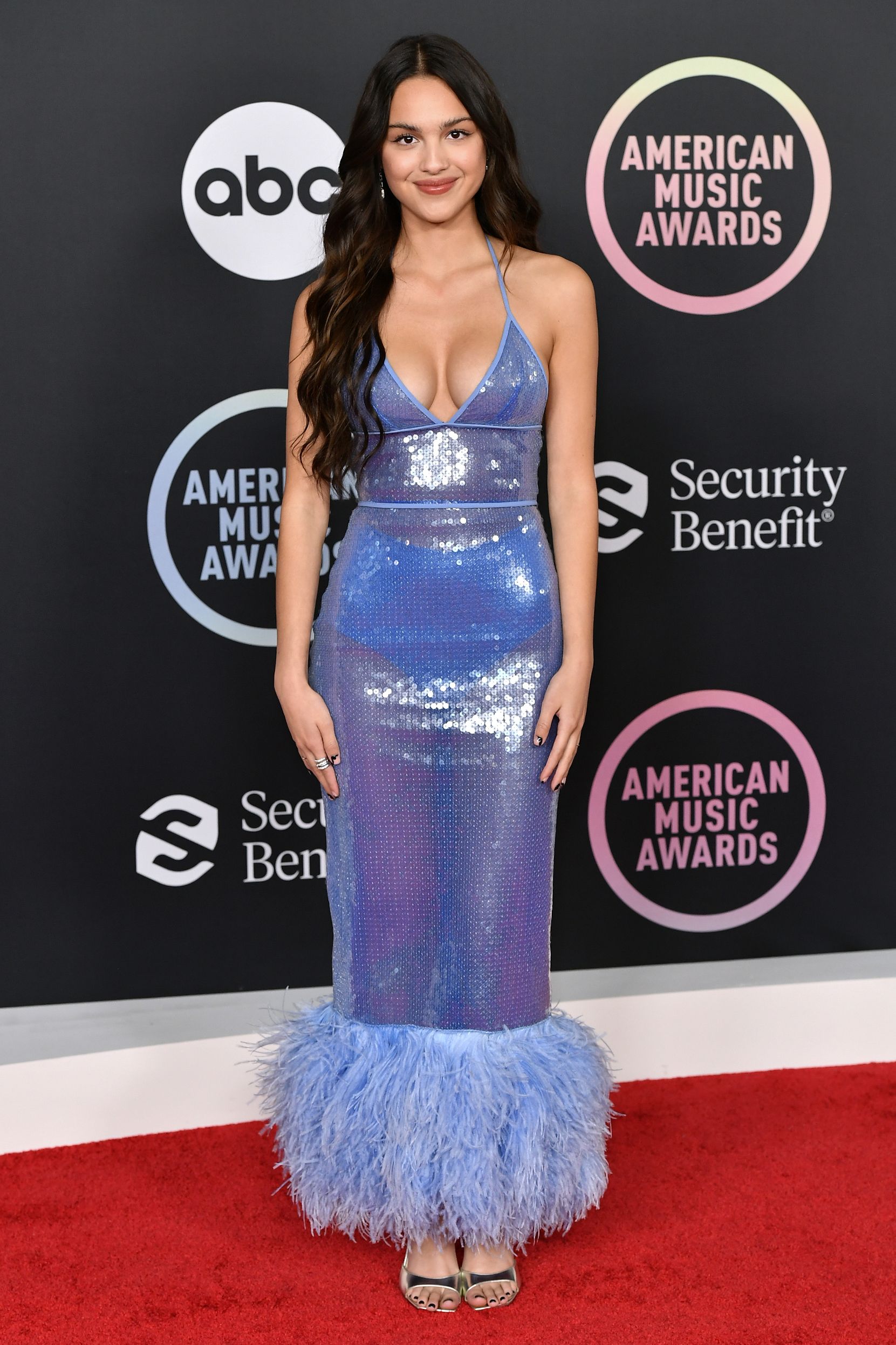