Australia’s expert immunisation panel is recommending AstraZeneca’s COVID-19 vaccine should now be given to people over the age of 60.

The Australian Technical Advisory Group on Immunisation (ATAGI) previously recommended the vaccine for people aged over 50. 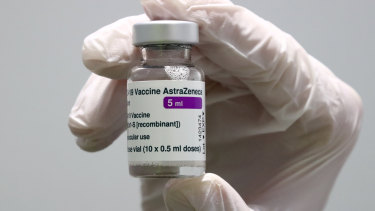 The Australian Technical Group on Immunisation has recommended raising the age for AstraZeneca to 60.Credit:AP

So far, there has been no decision to change the vaccine rollout.

Last week, the Therapeutic Goods Administration revealed a 52-year-old woman had died after developing a severe case of a rare blood-clotting side effect linked to the vaccine.

At the time, ATAGI confirmed AstraZeneca remained the vaccine of choice for over 50s.

Nine news reports state and territory leaders have been told and an emergency national cabinet meeting could be held in coming hours to discuss whether to alter the vaccine rollout. At this stage, no meeting has been organised.

When ATAGI first changed its advice on AstraZeneca after examining the data on the clotting disorder, thrombosis with thrombocytopenia syndrome, it said the risk of side effects was low but recommended limiting the vaccine to people aged over 50 due to the slightly higher risk of clotting in younger people.

The immunisation group has been meeting every Wednesday afternoon to discuss the vaccines, new information on side effects and the risk of COVID-19 to Australians.

Previously, the federal government has held media conferences straight after receiving updated vaccine advice but the Prime Minister is on a flight back to Australia.