When two people as creative as Devendra Banhart and Emily Labowe are in lockdown together, it could only be a matter of time before an imaginary friend is introduced into the mix. Meet Gerald.

“Because of the loneliness of the pandemic,” Banhart explains over the phone from their home in Los Angeles, Labowe laughing beside him. “I don’t need to ask Em [how she’s doing]. I know how Emily’s doing, because I’ve been next to her all day. And I know what she did today. No, I’m not going to ask you what you did today. So what did Gerald do? We make up this whole story. Gerald went to the arboretum.”

“We were living vicariously through Gerald,” Labowe says.

Gerald, as it were, is also what they’ve been lovingly calling their quarantine project, a gender neutral set of clothes that marks their first joint venture as a couple. The pair have been together for four years and have never worked together until now. Banhart is mainly an indie folk musician, though he has recently ventured into art, having just opened his first solo show at the Nicodim Gallery in downtown L.A. Labowe, a model, launched a line of hand-embroidered underwear during COVID-19 called Poppy Undies.

“We do a lot of work parallel to each other at the house, but I’ve always wanted to do something collaborative together,” Labowe says. “And I think clothing was the first of many to come.” 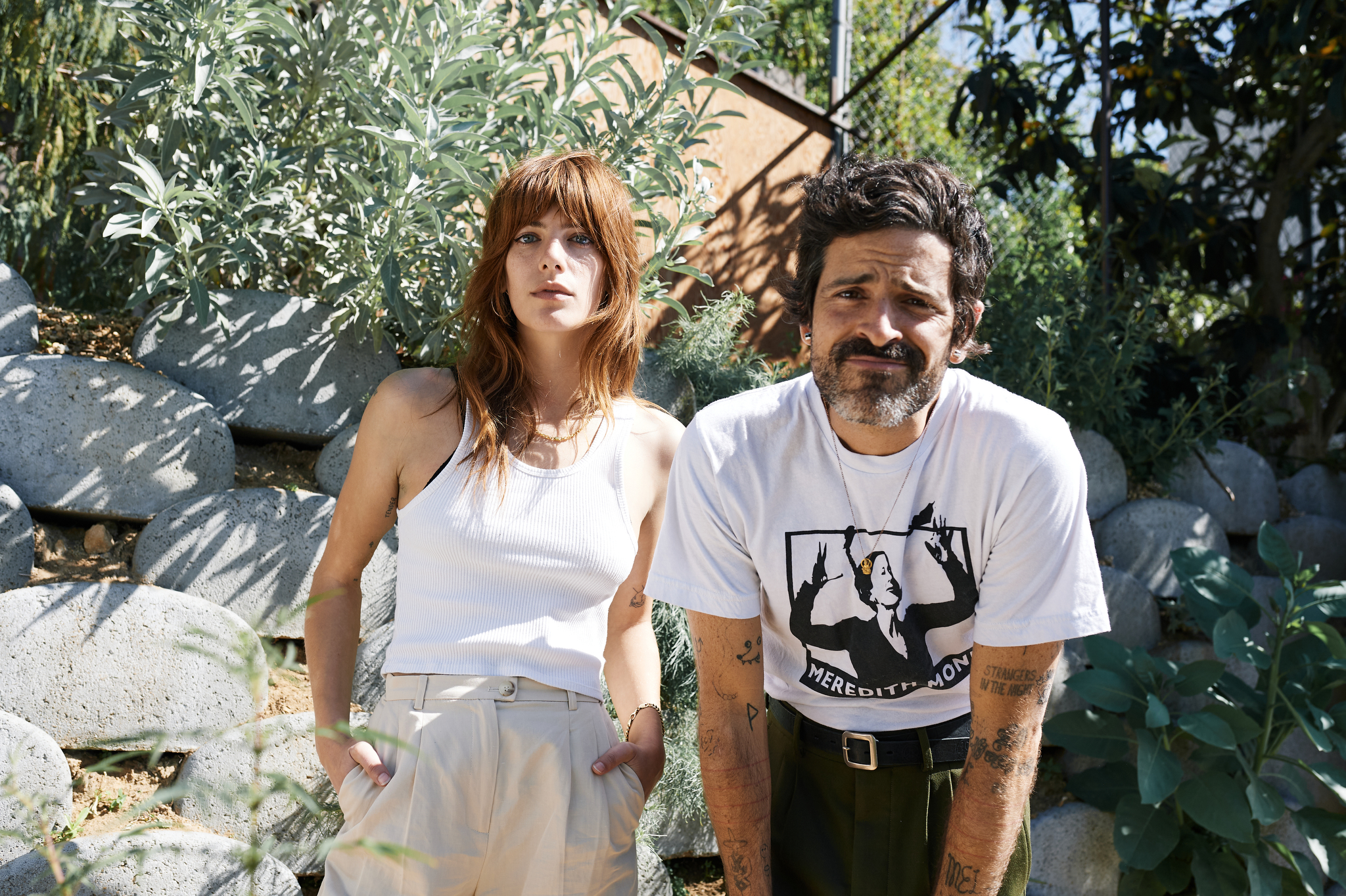 They started paying closer attention to what they were wearing when outings to leave the house became fewer and fewer during the pandemic.

“Since we’re not really going out there shopping for clothes or anything, we started to think maybe we should just design our own, just for fun,” Banhart says.

They have been inspired by pajama dressing, and strive for things that are comfortable enough to wear all day around the house, regardless of where the day might take you now that the world is opening up some.

“What can I wear that makes me feel like I’m excited to work? That doesn’t just make me sink into my total wave of despair, which is ever present. You know?” Banhart says. “I find clothing really can shape the way you think; just the architecture shapes the way you think. It feels like fashion is the room that our bodies reside in, that’s going to affect the way that it feels and perceives everything.”

Alongside their three-piece collection — they want to keep the exact items a mystery until launch, sometime this year — Banhart will be designing images to be embroidered on an upcoming batch of Poppy Undies, a set of unisex boxers. Labowe launched the brand in December 2019, with things kicking into high gear just as lockdowns began in March 2020.

“In a way, it was a good opportunity just because it gave me so much time and space to focus on it,” she says of launching the business during the pandemic. “And I was concerned with modeling and other things that I wouldn’t have the time, but that kind of all opened up, which was great. And thankfully the factory, they closed a few times during it, but were open the majority of the time, so it actually worked out wonderfully.”

Banhart, meanwhile, was fully immersed in his art show, something he had long wanted to commit to but, like Labowe, had always been too busy to focus on.

“I’ve been on tour for decades, and so I didn’t really have time to work with oil because it takes so long to dry. By the time oil paint dries, you’ve hit the road,” he says. “And so this was an opportunity to sit and work on painting.”

He had been trying to have a painting show for 20 years, and 2020 was the year he says he “genuinely, genuinely gave up” on the idea. “And I was just painting for myself and to self-heal to some degree through the whole experience,” he says. Of course, that was when he got the call. “It was really kind of beautiful. I really gave up. You give up control and things kind of come sometimes, you know?”

The pair says their relationship with their creative work requires practice and maintenance, which took some adjusting during the pandemic.

“I think it’s a wave. It just comes and goes. We have waves where we’re catatonic and just can’t do anything at all and are not excited to do anything. And are just kind of frozen. And then we have waves where we feel like being creative,” Banhart says. “Being creative is a practice and you really have to just practice it. You really don’t really arrive somewhere. Like, ‘Oh, we did it. I did art.’ It’s not really like that. Right? It’s a practice.”

“It’s true,” Labowe adds. “Once I got Poppy off the ground, I wasn’t embroidering by hand really anymore because I was so focused on the business side. But then two months or so ago I started picking it up again and found my anxiety so much more relaxed and I forgot how much I enjoyed it.”

Each are still developing their own work — Banhart has just finished a record — but they are motivated now to see where their collaboration can take them.

“We’ve done a couple little things, like your music video or whatever, but it’s always cool to watch your partner in work mode and I always enjoy seeing you on set or on stage or seeing you in your element,” Labowe tells Banhart. “So it’s been cool to be a part of that.”