Attorney-General Mark Dreyfus says there are “levers available” to the government on the handling of the Bernard Collaery case but remained tight-lipped about any steps the Commonwealth may take in the matter, as advocates renewed calls for Canberra lawyer’s prosecution to be abandoned.

Collaery, a former ACT attorney-general, was charged in 2018 with five counts of leaking classified information for allegedly helping his client, an ex-spy known only as Witness K, reveal information about Australia’s bugging operation of East Timor’s government during commercial negotiations in 2004 to carve up the oil and gas resources in the Timor Sea. 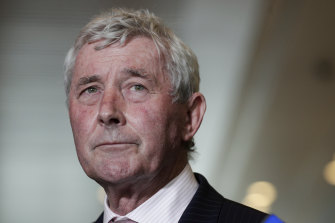 Lawyer Bernard Collaery is being prosecuted for allegedly helping his then client, Witness K, reveal aspects of an alleged secret bugging operation against East Timor.Credit:Alex Ellinghausen

Dreyfus, who as shadow attorney-general was critical of the Morrison government’s approach to the Collaery case, confirmed he had already received departmental briefings on it since being sworn in as the nation’s top law officer last week.

“I’m not going to go into any detail at all. I’m considering information, which the department is providing to me. I’ve sought further details and I’m not going to comment further. It would not be appropriate to do so. This is a prosecution process,” Dreyfus told The Sydney Morning Herald and The Age.

In opposition, Dreyfus implored the Morrison government to explain why the ongoing prosecution of Collaery was in the public interest and expressed concern about the secrecy that shrouded the proceedings. The Commonwealth has sought to use the National Security Information Act to argue the case should be heard behind closed doors.

Collaery is facing the prospect of jail, and after years of delays, his trial date has been set for October 24 in the ACT Supreme Court.

Dreyfus, when asked whether there were levers he could exercise now that the trial date had been set, said “yes” but declined to comment further.

“I will say no more than that. There are levers available,” he said.

The charges against Collaery and Witness K were authorised in 2018 by then-attorney-general Christian Porter, whose consent was required before the Commonwealth Director of Public Prosecutions could commence proceedings under the Intelligence Services Act 2001. In June 2020, Witness K was handed a three-month suspended sentence after pleading guilty, but Collaery decided to fight the charges against him.

Kieran Pender, a senior lawyer with the Human Rights Law Centre, said the attorney-general had the power under common law and the Judiciary Act to drop the prosecution.

“He should do so as soon as possible and enact stronger whistleblower protection laws to ensure this never happens again. It should not be a crime to tell the truth about government wrongdoing,” he said.

Key members of the crossbench in the lower house and the Senate – including Greens senator Nick McKim, incoming ACT senator David Pocock, Kooyong MP Monique Ryan and Goldstein MP Zoe Daniel – are among those urging Dreyfus to withdraw the Commonwealth’s consent for the prosecution.

“Mr Dreyfus should immediately instruct the DPP to cease the prosecution and drop all charges against Bernard Collaery. We have written to Mr Dreyfus to express this in the strongest possible terms,” McKim said.

“Mr Collaery and Witness K consistently acted in the public interest and should never have been prosecuted in the first place.”

Dreyfus has been cautious not to comment on the substance of the charges, but in remarks to the Australian Bar Association in April, said the “very manner in which the government has sought to conduct the prosecution [of Collaery] appears to me to be an affront to the rule of law”.