He is more familiar with the roughhouse mining and cattle industries but Australia’s richest man, Andrew Forrest, believes a film can change the world.

“I think it can,” the billionaire mining magnate said from London. “Awareness changes the world. 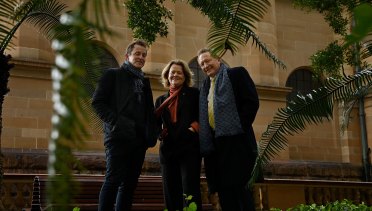 Forrest and wife Nicola have established a film and television production and funding company, Minderoo Pictures, with the aim of teaming up with filmmakers to inspire social change.

With initial backing of $10 million, the venture has lined up its first four projects focussing on issues including ocean conservation, plastic pollution and Indigenous education.

One yet-to-be-divulged project is being made by the Oscar-winning American director Louie Psihoyos (The Cove) with Josh Murphy (Artifishal).

The company is also backing the film Blueback, directed by Robert Connolly (The Dry) and based on a Tim Winton novel; Honey Ant Dreamers, about the Western Desert art movement from Michael Cordell and Emily-Anyupa Butcher; and First Born, about early childhood development in Indigenous communities around the world, with America’s Workshop TV.

Forrest said the company would continue the work of the Minderoo Foundation, the philanthropic organisation that he and Nicola founded, including its focus on modern slavery and cancer research. The plan is to “motivate people, companies and governments to act … reassess their behaviours or start a movement”.

The Fortescue Metals Group chairman, whose estimated net wealth is $27.2 billion, deflected the suggestion that his new venture would take him to the Oscars.

“I’d be delighted if we had that kind of influence but what I can tell you is we’re going to give this a real crack,” he said. “We’ve seen with modern slavery just how awareness can change behaviour in every country in the world, how it can it hold otherwise recalcitrant/immoral companies to account.”

Nicola Forrest, who will co-chair the new company with her husband, said film production would add to Minderoo Foundations’ existing support for the arts and culture.

“It’s a great tool in order to spread a message,” she said. “It’s easily accessible and if it’s a compelling story and it’s entertaining, it can have a huge influence.” 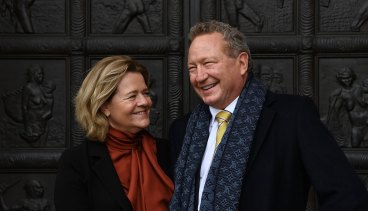 “You can create political change”: Nicola and Andrew Forrest.Credit:Kate Geraghty

The Forrests have been thinking about setting up a social impact film division since they joined the philanthropy commitment The Giving Pledge almost a decade ago and met Canadian billionaire Jeff Skoll. His company Participant Media has produced such socially-progressive projects as An Inconvenient Truth, Spotlight, Fast Food Nation, Syriana and Murderball.

“We’ve often talked with him about doing something around modern slavery,” she said. “George Lucas, who’s also a member of The Giving Pledge, came to visit our office in Perth at least five years ago with his wife Mellody Hobson looking at making a film around slavery. So we’ve always been interested in this medium.”

The hope is that the awareness created by films could influence even reluctant political leaders.

“If enough people are saying ‘well, actually, why isn’t this happening?’ then you can create political change,” she said. “You can demand that of your representatives. I don’t think we necessarily do enough of that.”

Minderoo Pictures’ executive producer Richard Harris said it would be “seeking the best films, the best teams and the best ways to invest across the film value chain, from development through to production and release”.

While it would be backing feature films and possibly television series, the core of the slate was likely to be documentaries.

“Our job is partnering with the independent sector on the projects that matter to the Minderoo Foundation and are going to have an impact on the world,” he said. “We’re absolutely global in our ambition.”

Harris said the hope was that revenue from projects would top up the $10 million in initial funding.

“We don’t give grants,” he said. “Our view is impact first, recoupment second.”

Find out the next TV, streaming series and movies to add to your must-sees. Get The Watchlist delivered every Thursday.