Figures captured in the Australian National University’s Chinese Investment in Australia database, which has been running since 2014, showed investment flows were down 61 per cent on 2019 and a far cry from the highs of 2016, when the amount was $16.5 billion. 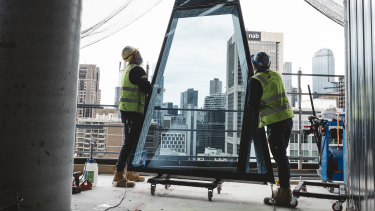 A construction project by Probuild, the company that was set to be sold to a Chinese-state owned entity before the transaction was blocked.Credit:Tash Sorensen

Only property ($461 million) and mining ($414 million) were resilient, with all but one deal in the $1.029 billion recorded in those sectors, in contrast to previous years when new Chinese investment was present in almost all parts of the economy.

Associate Professor Shiro Armstrong, director of the ANU bureau that compiles the data, said the coronavirus, new national security laws and the overall China-Australia relationship were to blame.

“It’s the national security test that is being applied to all incoming investment that allows the Treasurer to go back and retroactively disapprove investment, which has created uncertainty,” Dr Armstrong said.

“If you’re setting up a factory or setting up a business in a foreign country and operating under their rules, certainty is really important.”

Trade Minister Dan Tehan said Australia remained an attractive destination for global investment, which he said created jobs and opportunities, because of the government’s response to the coronavirus.

“Our performance throughout the pandemic will only serve to strengthen our attractiveness as an investment destination through 2021,” he said.

Due to the pandemic, all deals were scrutinised after fears foreign investors could snap up distressed assets for most of last year.

New laws passed last year established a strict new test on asset sales in areas with national security implications like telecommunications. This allowed the Treasurer to countermand or add conditions to sales after they have been approved if they imperil Australia.

In one high profile example, the China State Construction ­Engineering Corporation withdrew its bid for the construction giant Probuild, a South African-owned Australian firm, in January after Treasurer Josh Frydenberg indicated it would be rejected.

China accused the Morrison government of politicising trade and abandoning free market principles over the move, but the laws apply to all foreign investment and China has used extensive trade strikes against Australia, including on commodities such as coal and wine.

Australia has traditionally relied on foreign investment to fund industrial development because the local pool of money is relatively small.

United Nations data shows foreign direct investment fell globally by 42 per cent last year as a result of the pandemic but grew for some countries, including China, Japan, India and Spain.

As well as the new laws, which were introduced after concerns were raised about asset sales such as the lease of the Port of Darwin to Chinese companies, Australia and China have clashed over the Chinese government’s handling of the coronavirus and its crackdown in Hong Kong.

Only 20 Chinese investments into Australia were recorded in the ANU database in 2020, which tracks commercial investments by the ultimate owner of the firm that makes them.