The company leading the aged care vaccination rollout in Victoria says it was never contracted to immunise aged care workers, despite the Morrison government in February pledging to vaccinate residents and staff by Easter.

The revelation prompted questions from the Australian Nursing and Midwifery Federation about why the agreement was never clearly communicated to aged care providers or staff, many of whom were waiting for vaccines that never came. 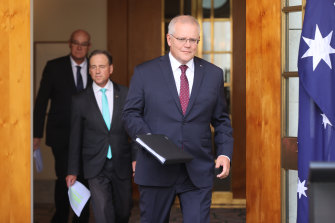 Contractors only gave vaccines to aged care workers when there were enough left over after all residents had been vaccinated.

Just 11 per cent of staff in nursing homes in Australia have had a first vaccine shot, according to the results of a federal government survey.

Almost 2000 aged care residents got coronavirus during Victoria’s second wave of infections last year and 655 died as a result.

All of Victoria’s 596 aged care homes have now had their first vaccine dose offered to residents and 382 have had their second. Staff at many of those homes were offered leftover doses.

Asked on Tuesday if he was responsible for aged care, Mr Colbeck said that was not a question with a “yes or no answer”.

In February, a joint press release from Health Minister Greg Hunt and Mr Colbeck declared vaccines would go to aged care homes within about six weeks from the start of the program.

This would have seen the program completed in early April, and Mr Hunt said the in-reach vaccination program by private contractors would include staff as well as residents.

“Vaccination for residents and staff will be made available through residential aged care facilities where they live or work, and it will be administered through an in-reach workforce provider,” Mr Hunt said in the press release.

However, Aspen Medical spokesman Eamonn Quinn said the company had only ever administered doses to aged care workers that were left over once residents had been vaccinated.

Aspen’s practice was in line with Australia’s COVID-19 vaccination dose policy, which says that any excess doses in aged care homes “should be used to vaccinate eligible individuals who are expected to be at the facility’s second dose vaccination clinic”.

Mr Quinn said Aspen Medical, which solely administered Pfizer doses, started its vaccination program on February 21, five days after the federal government had sent out its press release and the company had only ever been contracted to immunise residents, not staff.

The Age contacted Mr Hunt’s office but did not receive a response before deadline.

Senator Colbeck told The Age and The Sydney Morning Herald on Tuesday that the government was forced to reset its rollout across aged care after receiving health advice that residents and staff should be inoculated at separate times and the changed advice on the administration of AstraZeneca to people aged under 50.

He said that following that advice, the federal government had worked with the states and territories to “open as many avenues to access a vaccine as possible”.

The vaccination program for the most vulnerable may have been far slower than the six weeks the Morrison government promised in February, but it has netted millions for the four private nursing providers contracted by Canberra to deliver the shots.

In Victoria, only two companies are doing vaccinations: Health Care Australia, which has a $30 million contract with the Commonwealth, and Aspen Medical, which is to be paid $25 million.
A Health Care Australia spokeswoman said: “We continue to consistently meet our allocated schedules.”

But Aspen’s Mr Quinn said: “We’ve done our bit – our allocation is 100 per cent complete. Twenty-nine facilities have never had a visit and none of them were ours.”

Australian Nursing and Midwifery Federation Victorian branch secretary Lisa Fitzpatrick said it came as a surprise at the time that aged care staff had been left out of routine vaccinations, and she was devastated to hear they had never been included in rollout plans. “I feel deceived and I feel my members would. If you didn’t contract a workforce, how was it going to happen?”

She said from the beginning of the rollout staff had only received a jab from visiting medical staff if there were leftovers, yet there was “never any willingness from the Commonwealth to acknowledge that they wouldn’t be administering to the private aged care workforce”.

Ms Fitzpatrick said rather than being told that they wouldn’t be vaccinated by the government in-reach program, staff were advised that they would be vaccinated at a later date to residents because they wanted staff available to care for residents if they became unwell after their vaccine. “The people never came back,” she said.

Opposition aged care services spokeswoman Clare O’Neil said it was breathtaking so few aged care workers had been fully vaccinated by now. “The government must immediately deliver a detailed plan with clear vaccine targets for the aged care workforce,” Ms O’Neil said. “Targets ensure urgency and right now the Morrison government displays no urgency at all.”

Prime Minister Scott Morrison was asked in question time whether he stood by his comments in March this year that the vaccine rollout was not a race.

“I do stand behind my words. And my words were based on the expert advice of the chair of the scientific and technical advisory group, Professor Brendan Murphy,” Mr Morrison said.

Later, Professor Murphy clarified what he meant when he said the vaccine rollout was not a race compared to places like the US and the UK, where emergency authorisation was sought “because people were dying”.

But now, he said, the phrase was unhelpful when it came to discussing the vaccine rollout. “It’s not a race in a sense that we’re not competing against anybody else, we are doing what we want to do now to protect the Australian community as quickly as possible.”

“We want it to stimulate demand” among nursing home staff to get vaccinated, Victorian Aged Care Minister Luke Donnellan said.

The renewed focus on Victorian aged care came as two workers at an Arcare aged care home in Maidstone – one of whom also worked at the BlueCross Western Gardens centre in Sunshine – tested positive to COVID-19.

Victoria now has 63 active cases of coronavirus, and the outbreak has affected five aged care homes, after workers reported for shifts at multiple homes.

The federal government from July to November mandated that aged care staff only work at one home. It dropped this rule in November and only reinstated it on Friday last week.