France should have been aware Australia was prepared to break a $90 billion deal to build conventionally powered attack submarines, Prime Minister Scott Morrison has suggested, despite Paris’ accusation that the Canberra-Washington move was treacherous and brutal.

As Defence Minister Peter Dutton said the broader arrangement under the trilateral relationship with Britain and the United States was aimed at ensuring enemies “think twice” about attacking Australia, the Prime Minister defended the decision to break the contract with France as in the national interest. 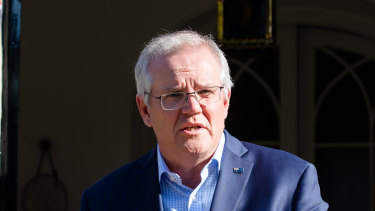 Paris has recalled its ambassadors to Australia and the United States over the decision by Canberra to abandon its deal with France’s Naval Group to build 12 submarines. Australia will instead buy at least eight nuclear-powered submarines, most likely from the United States, as part of the security partnership with Britain.

Mr Morrison, who held talks with French leader Emmanuel Macron about the submarines in June, said Australia’s concerns about the Naval Group boats were well known.

He said he could understand France’s disappointment, but added he had always been clear that Australia would act in its own strategic interests.

“I think they would have had every reason to know that we have deep and grave concerns that the capability being delivered by the attack class submarine was not going to meet our strategic
interests and we had made very clear that we would be making a decision based on our strategic national interest,” Mr Morrison said.

“Ultimately this was a decision about whether the submarines that were being built at great cost to the Australian taxpayer were going to be able to do a job that we needed it to do when they went into service.

“Our strategic judgment based on the best possible of intelligence and defence advice was that it would not, and so therefore to go forward when we are able to secure a supreme submarine capability to support our defence operations, it would have been negligent for us not to.”

Mr Morrison said he had told Mr Macron of Australia’s decision on the evening before it was announced.

But France’s Foreign Minister Jean-Yves Le Drian, in a sign of the rupture between Paris and Canberra, used public television to label the decision as “duplicity, disdain and lies”. 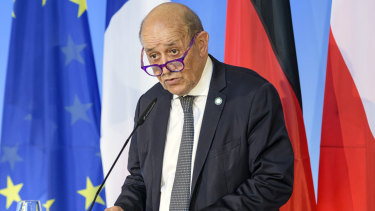 French Foreign Minister Jean-Yves Le Drian says Australia and the US have betrayed France with the submarine deal.Credit:AFP

The recalling of its ambassadors “signifies the force of the crisis today” between the French government and Washington and Canberra, he said in an interview on France 2 television.

Mr Le Drian denied reports there had been advance consultations with France ahead of the announcement, saying “this isn’t true”.

“(Allies) don’t treat each other with such brutality, such unpredictability, a major partner like France … So there really is a crisis. There are reasons for us to question the strength of our alliance,” he said.

The French ambassador to Australia, Jean-Pierre Thebault, said before he left the country that he had been at the meeting between Mr Macron and Mr Morrison in June.

He said the Australian Prime Minister had mentioned “there were changes in the regional situation” but gave no indication it was about to abandon the French contract. 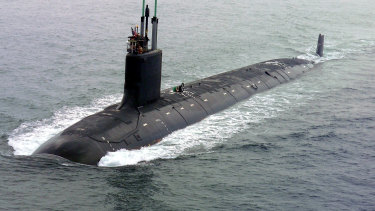 Australia’s new submarines based on US tech may not be in operation until the late 2030s.

“Everything was supposed to be done in full transparency between the two partners,” he said.

Outside the submarines decision, the new Australia-UK-US agreement also provides for advanced technology such as long-range hypersonic missiles and undersea drones. More US Marine troop deployments in Australia are also likely.

Mr Dutton said the risk of the local power industry or internet banking being shut down by overseas actors was very real, arguing the agreement with Britain and America would boost Australia’s chances to retaliate.

“We need to make sure that we’ve got the defences in place but also the offensive capacity as well to be able to strike back so that people have to think twice about attacking us,” he told Sky News.

“It provides a deterrence and it also provides us with the ability, given we’re an island nation we’ve got choke points to the north approaches … (that) need to be dealt with, and so there are a range of capabilities that we could use to strike again at extremists.”

Labor foreign affairs spokeswoman Penny Wong accused Mr Morrison of failing to take responsibility for the deterioration in relations between Australia and France.

“I think we’ve seen overnight, very concerning developments in that bilateral relationship, which is an important relationship for Australia and for the region,” she said.