Victoria has been dudded out of transport funding compared with NSW and Queensland because of the realities of the electoral map, a new analysis of projects promised during election campaigns finds.

Not only is the funding skewed towards marginal seats, but the promises made during election campaigns by all sides tend to be poorly thought-through and not backed by proper business cases, according to a new Grattan Institute report. 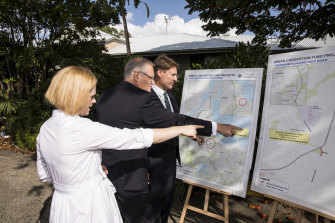 Automotive lobby groups say politicians could spend a lot more, with only about half the $13 billion collected from fuel excise being put back into transport projects.

The Grattan Institute’s transport expert Marion Terrill says spending in the area is an increasingly popular way to court voters.

Her analysis finds over the past 15 years, there has been a persistent pattern of the Commonwealth spending a disproportionate amount of transport money in NSW and Queensland, which have the most seats where voting swings can decide elections.

“The pork-barrelling politicians can tell semi-plausible stories about jobs created and economic opportunities unleashed, and – best of all – there are great hard-hat photo opportunities,” Ms Terrill says.

“Politicians who insist on pork barrelling are wasting taxpayers’ money, and the biggest losers are people who live in safe seats or states with few marginal electorates.”

She warns the practice is an arms race: the more one party promises, the more the other will.

At the 2016 election, the Coalition promised $5.4 billion of transport spending and Labor pledged $6.7 billion – about one year’s worth of federal expenditure.

Three years later, they each promised the equivalent of seven years’ worth of spending.

Hardly any of the large projects promised had been approved by Infrastructure Australia as making a strong case for taxpayer assistance: just three of the 132 projects pledged by the major parties in 2019.

The $4.9 billion urban congestion fund – which included the controversial commuter car parks program – was one of the Coalition’s key ways to distribute transport spending in the last election.

Many of the projects announced are yet to be built. For instance, of the 47 commuter car parks originally promised – mostly in Coalition seats – six have been built, six are under construction and nine have been cancelled. 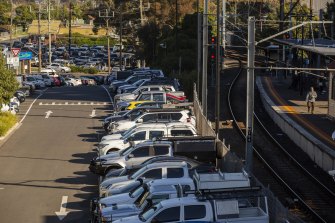 Ringwood train station in Melbourne is among the 47 sites the Coalition chose for commuter car park upgrades at the 2019 election.Credit:Paul Jeffers

Ahead of the coming poll, due by May, there is still nearly $850 million left in the fund.

But the Australian Automotive Association says persistent under-spending on transport means there is a backlog of smaller projects and maintenance that need urgent attention.

Funding for road infrastructure comes from the 44-cents-a-litre fuel excise, which has come under scrutiny in recent weeks as petrol prices soar.

Just 53 per cent of this revenue has been put back into transport networks over the past decade.

“We are playing catch up at the moment because too little of the tax revenue has been spent on this over the longer period.”