The state government will fund the planting of 500,000 trees in Melbourne’s west starting in September.

The trees will be planted in Maribyrnong, Wyndham, Melton, Brimbank, Moonee Valley and Hobsons Bay as the city’s west has far less green cover than other parts of Melbourne. 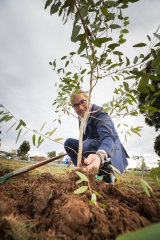 Acting Premier James Merlino plants a tree at the announcement of the tree program.Credit:Jason South

Acting Premier James Merlino said the two-year, $5-million program would see the government offer grants to community groups and councils to plant trees, while current planting programs could be upscaled.

He said mature trees would be used and they would work with councils to select the right trees for the right areas.

“In the immediate tranche of planting, we’re going to focus on mature trees so we get the greatest impact as quickly as possible,” Mr Merlino said.

“We want to make a real difference.”

Mr Merlino said the government was keen to expand the program to other parts of the state, but the initial focus was on improving green cover in the western suburbs.

Lisa Field, from sustainability group Transition Wyndham, told The Age this month that a lack of trees in newer suburbs was creating an urban heat island effect.

“You don’t have that tree canopy cover to be riding under or walking under. Where there are new trees? … They’re still not providing shade over the walking trails,” Ms Field said.

“So on a hot day, you don’t have anything. You’re surrounded by concrete, basically.”