Chinese telco Huawei is calling on the Australian government to begin talking to the company about how to roll out a new generation of mobile technology called 6G, to avoid a repeat of the ban on its equipment in 5G mobile networks.

The company, which has given up on overturning its ban from Australia’s 5G rollout, now wants to discuss working with the government on research and development for the next generation of mobile infrastructure. 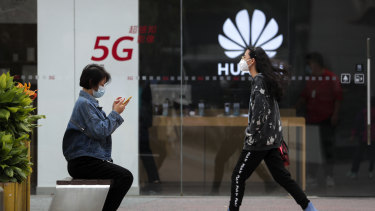 Huawei has been banned from supplying equipment to Australia’s 5G network.Credit:AP

Huawei director of corporate affairs Jeremy Mitchell said it was “not too late” to allow Huawei to supply equipment for Australia’s 5G network “but it is very unlikely”.

“The conversation we now want to have with the Australian government is what do we do when 6G or 7G comes, because like it or not Huawei or another Chinese company will be the leader in this area,” Mr Mitchell said.

“We would like to work with the government to ensure Australia has access to the best technology, but do so in a way which gives security agencies confidence in terms of risk mitigation.

“6G is just at the very beginning of research development but it’s important to get in now to understand where this technology is going.”

In 2018, the federal government banned “high-risk vendors” – including Huawei – from participating in Australia's 5G rollout on the basis that they could be subject to extrajudicial directions from a foreign government that conflicted with Australian law.

One of the principal reasons Australia banned Huawei was that security agencies found there was no way to split sensitive “core” network functions from its “radio” or transmission parts.

Mr Mitchell said co-operating with Huawei from the outset would show that this view was “wrong” and he hoped the government would take a different approach with 6G.

He said the recent efforts by telecom giant Ericsson to lobby the Swedish government to overturn its Huawei ban showed that the Australian government had made the wrong decision on 5G.

In a series of leaked text messages to a Swedish government minister, Ericsson’s chief executive, Börje Ekholm, threatened to pull its headquarters out of the country if the ban on Huawei was not lifted.

While Ericsson has campaigned against banning Huawei in Europe, the Swedish telco has not publicly weighed into Australia's ban.

“In Europe they’ve always had an open and competitive environment when it comes to the vendor space.

“Look at the way they've done research co-operation – it’s a different mindset on how the interaction goes in the vendor space compared to Australia.”

Asked whether it supported Australia's Huawei ban, a spokeswoman for Ericsson said it was "focused on providing world-leading technology solutions for customers and we are committed to pushing the boundaries of innovation, as we have done here in Australia for the last 130 years".

"Ericsson is a trusted telecommunications provider that complies with relevant government legislation and/or administration orders," the company spokeswoman said.

Asked whether the government had begun research into the 6G technology, a spokesman for Acting Communications Minister Michael McCormack said the government was “focused on the efficient and timely rollout of 5G”.

Fergus Hanson, the director of the Australian Strategic Policy Institute's International Cyber Policy Centre, said the Australian government had an "excellent capability" to make assessments about the 5G rollout.

“I think there’s ample evidence from the United Kingdom's review into high-risk vendors that there are a litany of issues that need to be addressed," he said.