Single Melbournians have been kissing petri dishes for art.

It feels like kissing jelly. The culture medium in the dish, agar, is made from boiled seaweed. The moment is less than romantic, satisfying or fulfilling. 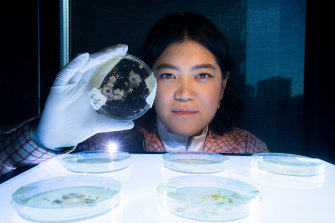 But something is left behind by those kisses: the microbiota of the lips, the invisible ecosystem we host. The bacteria tuck into the agar and grow, and flourish into galaxies of life. And Melbourne artist and designer Huei Yin Wong has been photographing them.

Her first solo exhibition of those images, Distant Kisses, is about our yearning for intimacy during the long COVID lockdowns and isolations. It’s about the beauty-but-sterility of loneliness, and the thrill-but-danger of connection.

And it was also inspired, she says, by a message to aliens.

In the depths of the first 2020 lockdown, says Huei, “I did a lot of navel-gazing and thinking about the world around us”.

She hit on the petri dish as an artistic canvas that seemed particularly appropriate to the time. And she recalled a story, of the moment astronomer Carl Sagan fell in love with documentary maker Ann Druyan. They had never kissed, working together creating the “golden record” that would go out on the Voyager space mission as a message to the cosmos, and then in one phone call their hearts met.

“We’ve always gazed into the stars for meaning and connection,” says Huei. “And when lockdowns were imposed in Melbourne, we all became a version of that, we all became our own planets, looking elsewhere, trying to find connection. Our own kind of distant galaxies.

“So a lot of that was bobbing around my head.”

Originally, Huei’s plan was to go onto dating apps to track down participants. But lockdown restrictions made that tricky, so she found single people within her own network.

She sat down with them and recorded their experience of lockdown, “a chance to reflect on this intense time of enforced loneliness … at a time when there was a huge emphasis on coupledom”. 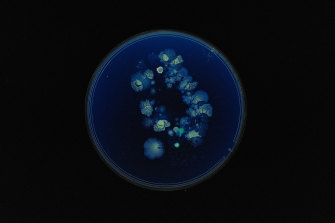 She got way more than she expected. There were people grieving the loss of a parent or friend, people whose fierce envy of the romantically entangled led them to “just grab strangers off the internet and call them their intimate partner on the first date”.

And there were cute stories of Zoom dates and weird lockdown dates, from that odd time of connection and separation.

“It was almost like some weird artistic therapy,” says Huei. “The moment we got out [of lockdowns] it seemed like no one really wanted to talk about their experiences. We immediately wanted to shove this dark time away and not look at it any more. But there was a sadness that sort of grew within us… and a lot of the people I was talking to felt they’d come out a different person. A bigger person.”

After their chat she’d ask the participants to “impart their kiss onto a petri dish. Taking the rich world inside them, their microbiota, and helping that flourish on a medium.”

The dishes sat around Huei’s studio on warm incubator beds, close to body temperature, like some kind of weird pet or plant collection. And the kisses became constellations. “And I’d photograph them after the culture had bloomed to look like the galaxies within us.”

The exhibition pairs each photograph with a QR code link to a soundbite of the interview, so viewers can make a connection themselves.

And, of course, there’s a flip side. These kisses reveal the micro world that assaulted the macro.

“A kiss used to be such a joyous thing, you know, you kiss a stranger at a party, how cute. But now this act of intimacy suddenly has a dark side. You could fall in love by getting close to someone, smelling their pheromones. And maybe this person could be giving you a deadly disease.

“There is an additional layer to intimacy now. That double-edged sword.”

Distant Kisses is supported by the City of Melbourne and shows at City Library Gallery, Flinders Lane, August 4-25.