Two days after the English singer’s headline performance in a sequined jumpsuit at Coachella, the 28-year-old has revealed his stadium tour will start in Perth on February 20, followed by Melbourne on February 24, the Gold Coast on February 28, and Sydney on March 3. 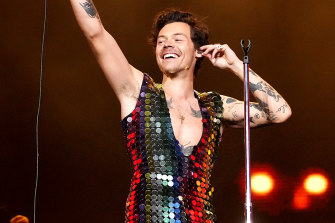 Harry Styles, on stage at Coachella in California at the weekend, will tour Australia in 2023.Credit:Getty

The former member of boy band One Direction, which shot to fame in 2010, released his chart-topping second solo album Fine Line in 2019 and won the 2021 Grammy Award for best pop solo performance with his song Watermelon Sugar.

His new single, As It Was, from the forthcoming album Harry’s House, topped the ARIA singles chart earlier this month.

At his weekend festival performance in California, Styles welcomed Canadian country music star Shania Twain onto the stage for a surprise performance of her hits Man! I Feel Like a Woman! and You’re Still the One. His 80-minute show also featured performances of As It Was and new songs Boyfriends and Late Night Talking.

Styles’ tour had originally been scheduled to take place in Australia in 2020 but was postponed due to the COVID-19 pandemic. The tour finally began in Las Vegas in September last year and will play to UK fans in June ahead of shows in Europe and Latin America later this year.