Jocelyn Jackson sees identities and beliefs as living things on our plates. The culinary activist created an interactive 3D tablescape with ARRAY Alliance and the Law Enforcement Accountability Project (LEAP) titled Fixed Price Menu which highlights the absence of community nourishment and centers it as the very thing that allowed Philando Castille to be murdered by Jeronimo Yanez in 74 seconds.

LEAP is helping shift narratives surrounding police brutality by amplifying and funding short-term creative projects like Jackson’s. As the founder of JUSTUSKitchen and the co-founder of the People’s Kitchen Collective, Jackson’s community initiatives focus on culinary liberation that honors the lived experiences of Black and Brown people. “The place that I get to reside in is creating these tablescapes and these menus and concentrating on the food that can gather us around,” she says. “And we can see on the plate a shared experience, whether it’s the ingredients, the recipes, or the story that goes along with it.” 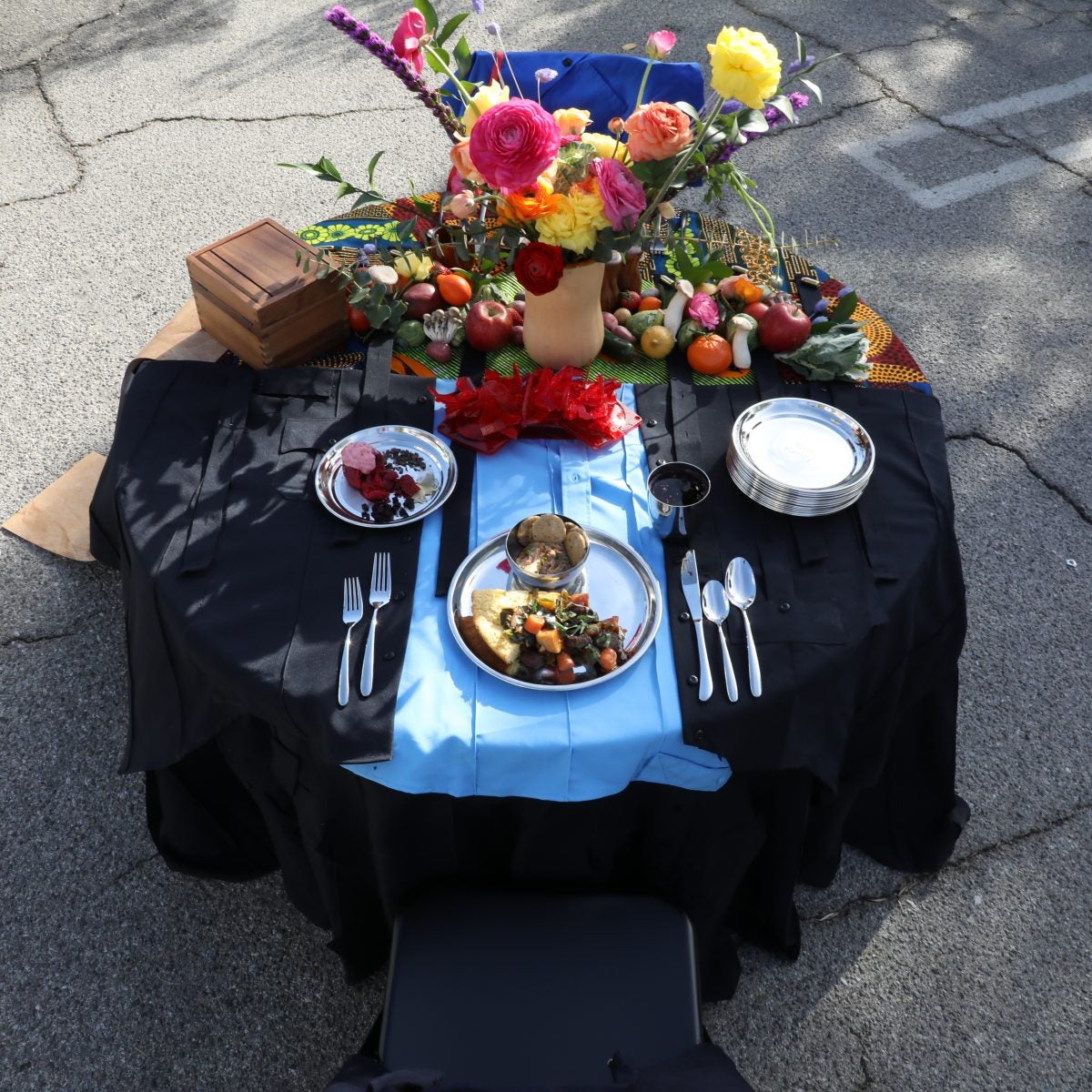 Jackson uses food’s familiarity to force consideration of life’s invisible connections. “It’s really important — context I think– to dive into the meaning of not only recipes, but also the ingredients where they’re sourced from, the power of them within any particular culture, in any particular time or place,” she explains. “Without that context, we lose the power of what food means and the capacity for it to heal in a really dynamic way.”

Audiences are offered a feast of conceptual menus, bold statements, and grim facts in this detailed digital work. Sitting among the hibiscus chia seed cooler and Spiced Black Eyed Pea Spread are seven bullets, a broken taillight, police uniform fabrics, references to the nutritional advice Castile gave children he cared for as a cafeteria worker. A radiant floral arrangement represents the vibrance and beauty of his life. Suspended bubbles offer context for each of the elements presented. “It’s one of my goals as an artist, as a cook activist, to really invite people into that space of slowing down and considering the power of the plate. The fact that one plate can really manifest so much social justice and awareness of one’s self and one’s community,” Jackson says. “All of our liberation is bound up with one another.”

The empty plate at Castille’s seat sits in a gap of missed opportunities for the men to bond as neighbors, fathers, and caregivers. 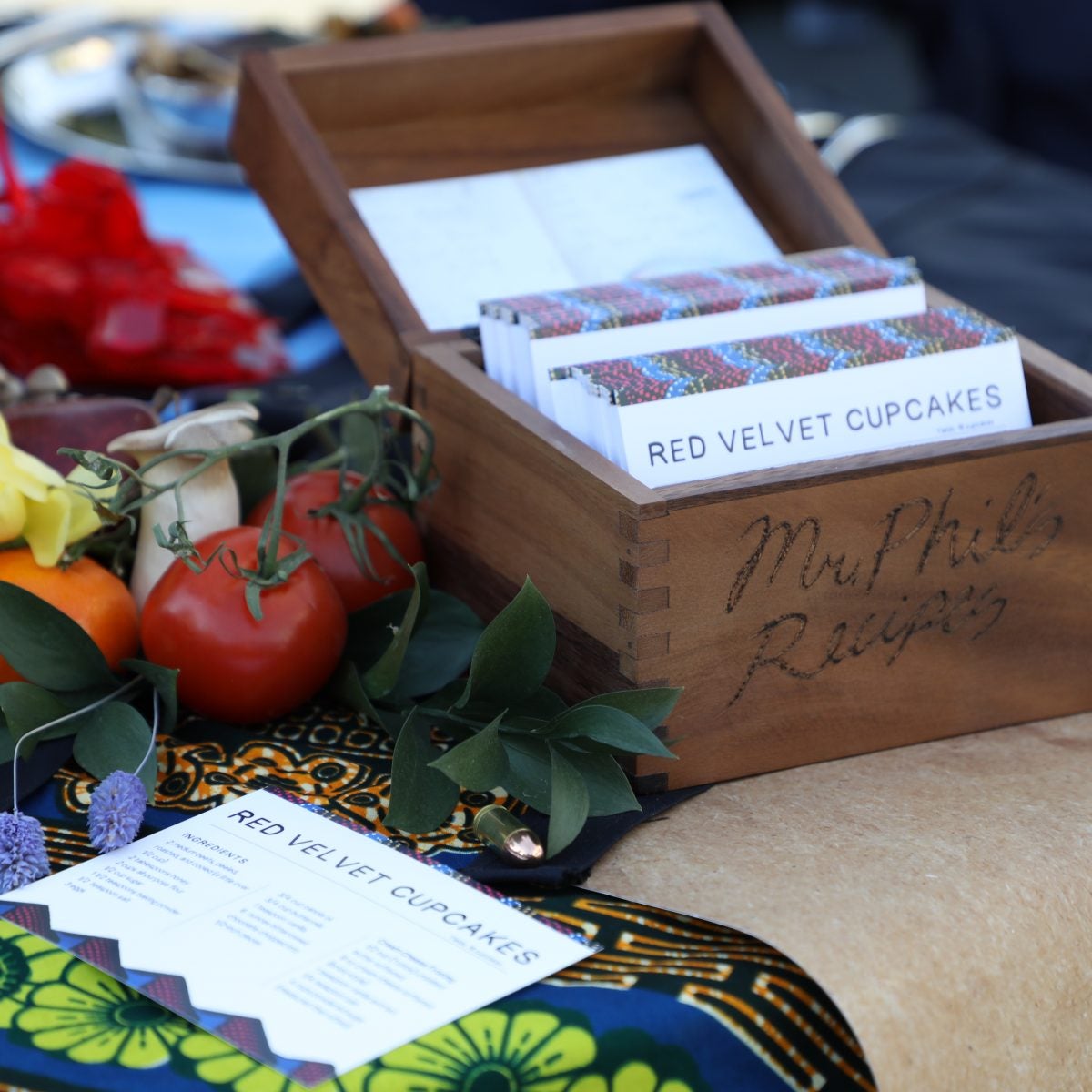 Jackson constructed the fixed menu using select facets of the society that placed Castile and Yanez in contact for the second time on July 6, 2016. (Yanez was one of multiple police officers who previously pulled Castile over on more than 40 occasions throughout his lifetime.) “These repeated and ongoing moments of police brutality, violence, and murder, they are, repeating in a way that is a pattern that is reflexive to a society that is steeped in white supremacy as the imprint for how we interact as human beings and identify each other’s humanity. So that’s my starting point for thinking about, if you have a lack or absence of intention, destruction can be a result,” says Jackson.

Before Yanez fired seven shots at Castille in the presence of his partner and daughter the two men might have frequented the same grocery store, due to the proximity of their homes. Yet in a different context, Yanez saw Castille as a threat rather than what he actually was, his neighbor. It’s that disregard of human similarity that Jackson wants to dry attention to. She wants audiences to consider “What does it mean to be in true empathy and compassion” and engage in the “practice of de-centering.” 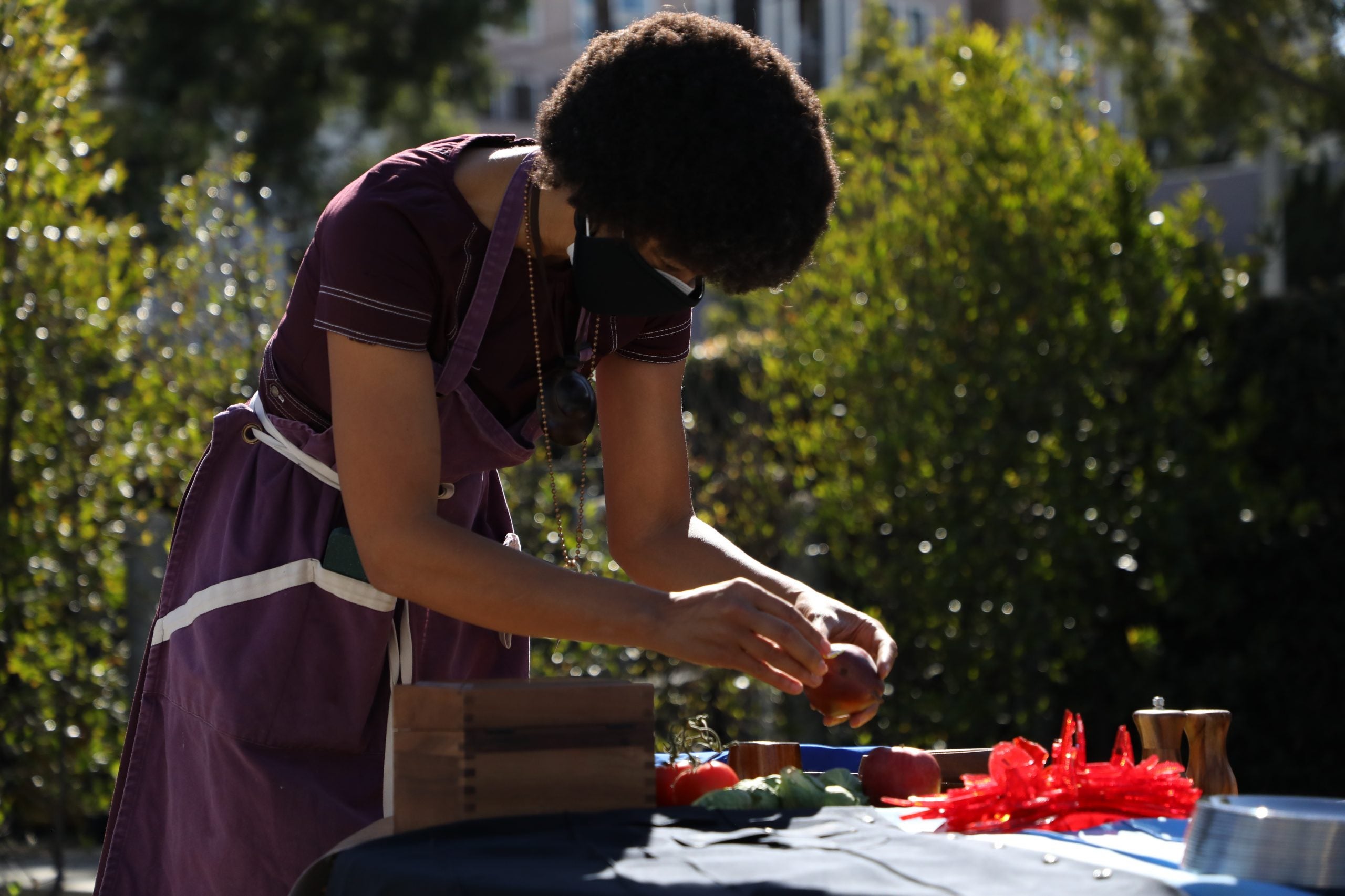 She confronted her own discomfort with violence by gathering materials for a mythical meal on her own. “It was a real point of necessity that I not delegate that task of going to this gun store, but I do that myself so that I would be able to feel that when I was cutting apart every shirt, when I was laying each bullet on the table, when I was putting the jacket on the back of the chair, I need that to be the personal moment of connecting to this person and finding in him his humanity.

Still, Jackson was unnerved by acquiring the items. “I got the bullets and they were so heavy in my hand, and I put them in the bag and I left, paid, and got to my car and I just dropped that bag on the ground and just leaned up against my car for several minutes, because the weight of that bag was the weight of this individual’s complete buy-in to a system that would allow him to murder someone and then not take any accountability for that.”

Castile and his killer were both in service professions but while police officers are a career day staple, cafeteria workers are deemed disposable by social hierarchies. The “lunch lady archetype,” erases the contributions of men like Castile altogether.“It was at the heart of so much of the work of this project. The fact that the proximity of these two people’s lives – Jeronimo Yanez and Philando Castille – it was couched in this place of them both being ‘protect and serve’ people within the community. There’s a legitimacy in both of those roles in theory but in this case, the individual who is committed to protecting and serving the community that killed another individual who is committed to protecting and serving their community, that didn’t have to happen. If they’d only had the opportunity to acknowledge the legitimacy, the beauty of this idea of being of service to community was shared between them,” Jackson says. 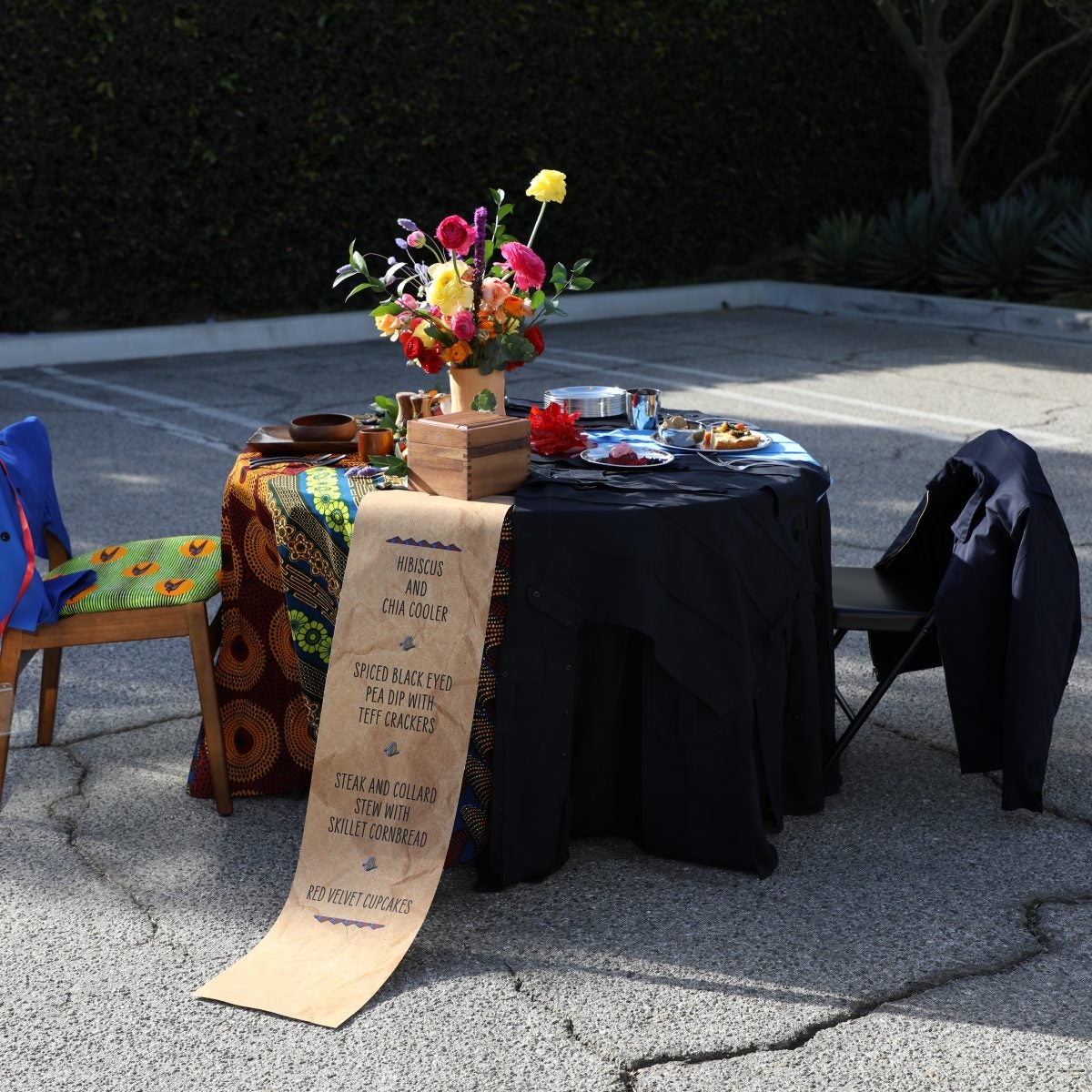 Deemed essential during nationwide panics and noble (by some) in death, frontline workers like Castille are rarely met with praise and appreciation regularly. “Health workers, food workers, the people that are at the heart of what is considered essential right now. These essential workers are not actually getting the essential respect of the work that they do on behalf of our community,” says Jackson. “These careers are not widely considered aspirational despite them being “the people that are care-taking with the most intimacy to our young ones in their daily lives.”

“He had 400 kids at a time,” she continues. “He knew all of their allergies. He was sure to introduce people to each other in the lunch room so that they could become friends with each other and not have people feeling alone.” The tablescape includes the fabric of each of their uniforms as a way to tap into“our ability to conceptualize what is of importance and who is of importance,” explains Jackson.

“Jeronimo Yanez just had a child before he shot Philando Castile,” she goes on. “This newborn child, that young could have been one of the children that Philando Castile would have served in the cafeteria at some point, because they lived in the same area. This reality for me was part of the project. If he’d only known how close in proximity they were to being in each other’s lives in a really intimate and caretaking way, how could there have been a different result?”