Labor has backed a $1.5 billion plan to build new port facilities in Darwin after the Coalition launched an election bid to win two crucial seats with a pitch to Northern Territory voters for a vast project to export minerals and gas.

Labor will support the budget measure with a pledge to “always do better on infrastructure” than the Coalition after two weeks of debate over a project that introduces competition to Port Darwin and its Chinese owner. 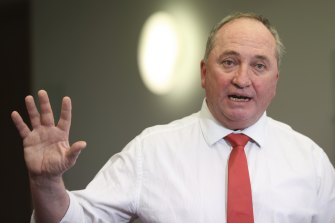 Deputy Prime Minister Barnaby Joyce challenged Labor to declare its position on the port project given the idea was aired in the days after the March 29 budget.Credit:Alex Ellinghausen

Nationals leader and Deputy Prime Minister Barnaby Joyce chose Darwin for his first major policy statement of the election campaign by announcing the port funding on Tuesday alongside Coalition candidates for the lower house and the Senate.

“This is something that is essential for this area – and that is to develop the infrastructure that’s adjacent to the port so it can bring the commerce in, so we can build the security of this nation and the strength of this city up,” he said.

Joyce made a false claim in his pitch to voters, however, by saying the money for the project had already been approved by law. While the supply bills were passed in the days after the March 29 budget, the appropriations bills were not, so the regional funding program is yet to be legislated.

The government is counting on its “nation-building” message to win support in the electorate of Solomon, which includes most of Darwin, and Lingiari, which includes areas outside Darwin as well as the rest of the NT.

Coalition advisers are naming the seats as key targets in the hope the government can gain ground in the regions despite poor polling in the cities. Labor’s Luke Gosling holds Solomon by 3.1 per cent while Warren Snowdon has held Lingiari by 5.5 per cent, although he is retiring and Labor is fielding a new candidate, Marion Scrymgour, a First Australian who served as an NT minister during her 11 years in the NT Legislative Assembly.

Joyce announced the port funding in central Darwin with the Coalition candidate for Solomon, Tina MacFarlane, and the candidate for Lingairi, Damien Ryan, as well as Senate candidate Jacinta Price and Nationals deputy and Agriculture Minister David Littleproud.

Asked if the Coalition could win the NT seats, Joyce challenged Labor to declare its position on the port project given the idea was aired in the days after the March 29 budget.

“It’s not as if this was all a big surprise announcement. The Labor Party has known this was coming … They had two weeks’ warning for Mr Albanese to come up here and say what he was going to do,” he said.

“None of them [in Labor] have said anything about the Northern Territory or Darwin. I imagine Territorians will bear that in mind when they go into the ballot box to cast their vote.”

“Labor is supportive of these proposals,” she said. “We will examine them in detail and work collaboratively with the Northern Territory government to ensure we can bring the jobs of the future to Darwin and the Territory.

“Labor will always do better on infrastructure for our regions than the Liberals and Nationals because we will actually deliver on what we say we will do.”

Chinese company Landbridge secured a 99-year lease of Port Darwin in a $506 million deal with the NT government in 2015 but then United States president Barack Obama expressed concern about the outcome later that year, leading to years of argument over the national security implications.

A review of the decision was released in December with a finding that there were no national security grounds for terminating the lease.

Separately, Energy and Emissions Reduction Minister Angus Taylor will confirm on Wednesday that $250 million in public funds will be split evenly between Australia’s two remaining oil refineries, run by Ampol at Brisbane and Viva Energy in Geelong.

The funding, announced in May last year, will be matched by the companies and used to upgrade facilities to meet new sulphur fuel limits by the end of 2024. Taylor will say the funding will help protect the existing 1250 jobs at the refineries and create 500 during construction.