Independent senator Jacqui Lambie says she felt intimidated by Prime Minister Scott Morrison when they were negotiating a secret deal in 2019 to send asylum seekers to New Zealand in return for her vote to repeal refugee medical transfer laws.

A three-year agreement announced on Thursday will lead to 450 refugees who attempted to arrive by boat resettling in NZ, whose offer to take them had been repeatedly rebuffed by the Australian government since it was first made in 2013. Priority will be given to about 100 people still on Nauru after being processed in Australia’s offshore immigration centre there. 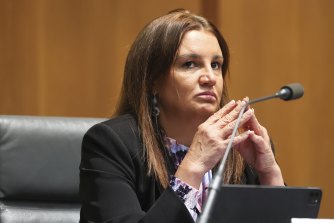 Senator Jacqui Lambie says the decision to repeal Australia’s medevac laws is “the hardest I’ve ever had to make in my political career”.Credit:Alex Ellinghausen

Senator Lambie revealed she had negotiated with Mr Morrison to accept NZ’s offer as part of her agreement in December 2019 to reverse the so-called “medevac” legislation, which was originally passed without the government’s support. The laws allowed refugees and asylum seekers in offshore detention in Papua New Guinea and on Nauru to be brought to Australia for urgent medical care with the sign-off of two doctors, instead of having to go through a lengthy court process to have the transfer ordered.

On Friday morning, Senator Lambie told Nine’s Today show she felt the Prime Minister was threatening her with jail if she talked about the negotiations.

A spokesman for Mr Morrison on Thursday night said the government would not confirm or deny if any deals were done with senators, but said Senator Lambie was briefed on the national security implications of the deal and legislation. He said there were strong rules around who could reveal the content of national security briefings.

Home Affairs Minister Karen Andrews and NZ’s Immigration Minister Kris Faafoi made the refugee resettlement announcement, which will see NZ accept 150 refugees each year for three years, on Thursday afternoon, more than two years after Senator Lambie says she made the deal with Mr Morrison.

Senator Lambie said the decision to repeal Australia’s medevac laws was “the hardest I’ve ever had to make in my political career”.

“In the end, I decided to support it. Not for nothing. I did it because I thought, on balance, that medevac gave me leverage to get people out of offshore detention. To let them move on with their lives, after years of limbo,” she said.

“That’s what I told the PM. I told him to show some humanity and get those people off those damn islands. I ended up negotiating an agreement with the government I couldn’t disclose. For years, I held up my end of the agreement. Yesterday, the government held up their end.”

Senator Lambie said she was told if she disclosed the terms of the deal then the deal would be off.

“I don’t believe that was said out of malice,” she said.

“The United States resettlement agreement was still going when I negotiated with the Morrison government. And because not everybody who was eligible for resettlement with the United States program would definitely qualify for the New Zealand program, I couldn’t speak out, in case asylum seekers who had a spot in the US deal would turn it down in the hope of taking the New Zealand option.

“I agreed to repeal medevac in exchange for an end to offshore detention. An end which, when secured, would mean we wouldn’t have a need for medevac. I stand by it. It won’t restart the boats. It won’t keep costing the taxpayer. It will put a line in the sand.”

Ms Andrews said the NZ arrangement would not apply to anyone who attempted to take a boat to Australia in future.

“Australia’s strong border protection policies have not changed. People who come to Australia illegally by boat will never be allowed to settle here. Anyone who breaches our borders will either be sent back or they will be sent to Nauru,” she told reporters.

Asylum Seeker Resource Centre advocacy director Jana Favero said while the deal had taken too long to be accepted, it was great it was finally happening “because it means safety and freedom for 450 people over the next three years”.

But she cautioned there would still be a significant cohort of refugees left in limbo.

“There are about 216 people still remaining on Papua New Guinea and Nauru. There are 51 in detention in Australia. And there are just over 1100 in the community in Australia. 450 will make a considerable dent in that, but that still leaves over 500 people without any future safety,” she said.

Coming soon: Essential news, views and analysis that cut to the chase of the federal election campaign. Sign up to our Australia Votes 2022 newsletter here.