Some people who come into the shop where I work want help, but they don’t want to ask.

They linger and make eye contact until you make the first move.

Remi* was one of these men. He was smiling and kind, but I could tell from the way that his eyes darted around, that he was overwhelmed as soon as he entered the adult shop.

I asked him if he needed any assistance.

He told me he was in the shop because he’s gay. He then told me that it was the first time he’d said his sexuality aloud. I felt like a proud friend, though we’d never met before.

The young man in his 20s came into the shop because he wanted to explore sex toys.

I love advising someone new to their sexuality; I over-explain about types of lube, what the toys do, and that the sexiest things are consent and feeling safe.

‘Is there a pleasure spot in my a**e?’ he bumbled.

I suggested an ergonomic sex toy made of silicone (this feels softer and somewhat natural), designed to hit the spot. He said he trusted my advice, bought it, thanked me for my time, then that was it.

I work in an adult retail store, predominantly aimed at men who have sex with men. I deliberately try to radiate openness to our customers or visitors and I love learning about the most profound aspects of strangers.

I basically help people have sex – I’m like the fairy c**k mother.

Before I got the job, I’d been inside an adult store a couple of times to politely browse then leave without buying anything. 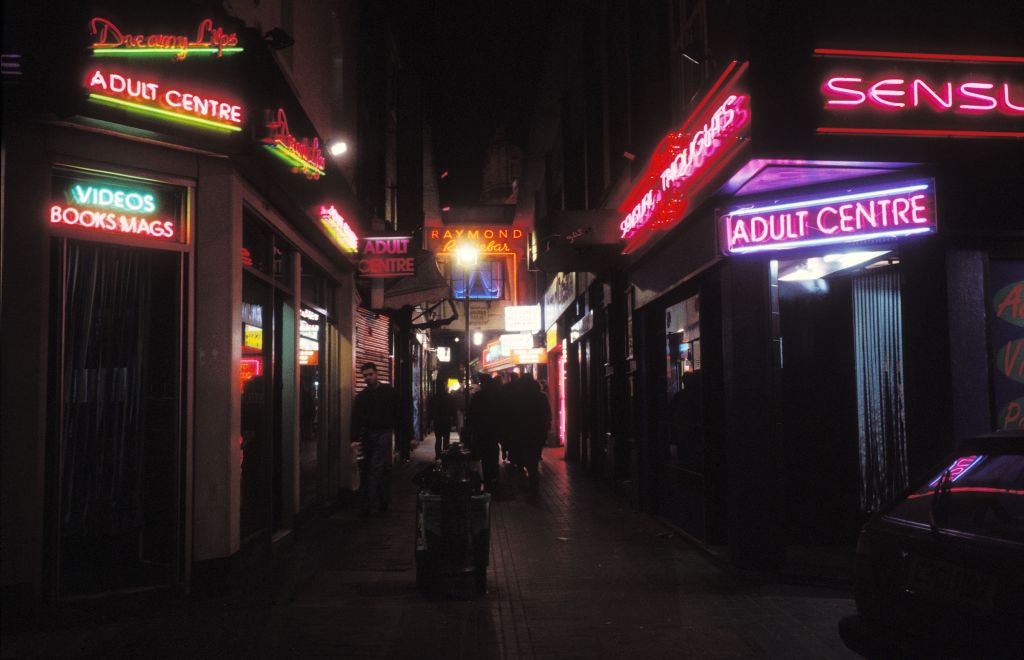 Historically, gay adult stores were backstreet affairs with covered windows, selling VHSs, magazines, and pamphlets advertising ‘rent boys’; getting your details in those was a lucrative catch.

As times move on, and while backstreet stores still exist, I see adult stores as brightly-lit establishments, with staff who know more than to grunt and give a filthy glare.

These stores function as an intrinsic part of LGBTQ+ communities: we have our theatres for creativity, our bars for socialising, and our LGBTQ+ centres for support. Our adult stores? For all those things.

Our shop is hidden in plain sight in the throbbing G-spot of Soho in London.

When I walked into the store last June to buy a daft present for a friend, I noticed there was a vacancy.

At the time, I worked at a book publisher, but I wanted to be myself somewhere unconventional and relaxed – this was the first shop I saw where I could use my years of retail experience.

So on a whim, I emailed a CV and had an interview a few days later.

To celebrate 50 years of Pride, Metro.co.uk has teamed up with Kyiv Pride to raise money for their important work in Ukraine.

Despite war raging around them, Kyiv Pride continue to help LGBTQ+ people, offering those in need shelter, food and psychological support.

We will be splitting the cash with a grassroots charity closer to home.

You can donate here

On the day of the interview, I panicked on a street corner before breathing, entering the store, and nervously saying ‘hi’. Thankfully, I got the job at the end of the interview, although my colleagues still take the piss out of me for wearing a blazer, and sliding my fake nose ring off to scare my future boss.

On my first shift, everyone was welcoming, sarcastic, lovely and savage all at once.

I was taught to help customers enhance their sex lives – from the difference between silicone and water-based lube, to the variety of toy materials and why gays value underwear brands instead of a Primark three-pack (it’s because of their loyalty to a brand, the fits being better, materials nicer, and it’s a little more sexy in their eyes).

Our shop is divided with an open *ahem* passage. First, it’s brightly colourful, full of clothes and gaudy gifts – like penis-shaped everything, rainbow flags, coasters, magnets and wind-up willies. We’re really not a back alley cupboard with a chain link doorway.

The spectrum of people I meet is magnificent and I love that I can have banter with customers – it relaxes them when they visit.

I enjoy speaking to older customers for their wisdom, although some of them think we still sell books or magazines with escorts’ numbers on the back.

One told me, ‘I went to a funeral a week in the 80s,’ as he fixed a red AIDS Day ribbon to his shirt. That was a sad eye-opener for me.

Another – a widow – said, ‘If you find a love of your life at your age, hold onto them. I’d do anything to see my love again. You’re young. If you find love, keep it alive.’ He bought a massive stock of poppers, and I hope he’s still kicking.

I was once even shown an impressive head scar when a customer had brain surgery after a furious wank gave him an aneurysm.

I use humour to quell rowdy drunks. I got hounded after work by a group of straight guys I’d served on their stag do and took them to a gay club where they carried me above their heads. It was surreal, hilarious and pure.

We serve a lot of men who open a chat by telling us they’ll be executed back home for being gay, so they ask how long they’re allowed to browse even though they can’t buy anything.

In a single day, I helped a modern-day skinhead buy cake-themed bath bombs for boyfriends; a lady in a niqāb was finding her husband a gay glory hole; a gent in a wheelchair searched for masturbators to accompany his ceiling swing sessions; and an astounded nun trying to find the nearby Roman Catholic parish.

I give directions to nearby churches, sexual health centres and gay saunas. I love recommending bars and pubs; I’m the part-time TripAdvisor for pissheads and good-time people.

But to put it bluntly, we are not a zoo.

I understand that when people are in Soho, they’re drunk, giddy and mindblown. Our shop is unconventional – it’s a sexy little bubble in a magnificent universe.

But walking past our shop door, pointing at neon-coloured boxers and cackling at posters of topless men — I want those people doused in lube and slid back to the Tube station.

Drunk groups of men roar at us and throw each other through the door like a fairground attraction. After my millionth time, it isn’t comfortable anymore even though I understand the fun.

This begs the question of how long I’ll stay; I’ve no answer because I enjoy it, mainly. I work with good people, I’m too swear-y for an office, and I love customers who make it worth the foolery.

I love that customers trust us. No questions are stupid and none phase me.

I’ve heard most – like ‘what is lube?’, ‘where can I go cruising around here?’, ‘how do I last longer in bed?’, and ‘what’s your number?’ (I’ve found multiple professional ways to say ‘piss off’ – but I promise to listen to every customer with respect and care).

So if you’ve ever been nervous about venturing into a Soho adult shop, I say – don’t be!

And Remi, although you had a little cry when you came out to me, you’ll be just fine. We’ll always welcome anyone lost and new just like you.

*Name has been changed

This year marks 50 years of Pride, so it seems only fitting that Metro.co.uk goes above and beyond in our ongoing LGBTQ+ support, through a wealth of content that not only celebrates all things Pride, but also share stories, take time to reflect and raises awareness for the community this Pride Month.

And we’ve got some great names on board to help us, too. From a list of famous guest editors taking over the site for a week that includes Rob Rinder, Nicola Adams, Peter Tatchell, Kimberly Hart-Simpson, John Whaite, Anna Richardson and Dr Ranj, we’ll also have the likes Sir Ian McKellen and Drag Race stars The Vivienne, Lawrence Chaney and Tia Kofi offering their insights.

During Pride Month, which runs from 1 – 30 June, Metro.co.uk will also be supporting Kyiv Pride, a Ukrainian charity forced to work harder than ever to protect the rights of the LGBTQ+ community during times of conflict. To find out more about their work, and what you can do to support them, click here.