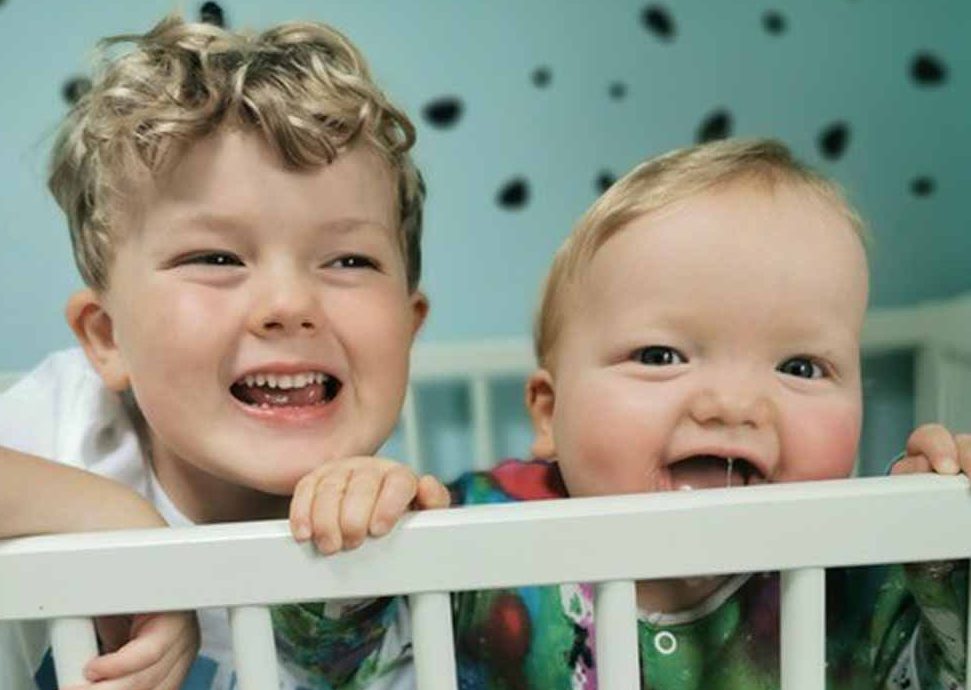 Emily Whalley, 31, struggled with her mental wellbeing after the difficult births of each of her sons; Arthur, now five, and Henry, now 23 months old.

Each baby had to be delivered by emergency caesarean, then went on to have terrifying health problems in their early life.

This left Emily experiencing postnatal psychosis and OCD, which meant she was plagued by intrusive thoughts that told the mum her child was dead in their cot.

Having recovered from this, Emily has now used her experiences to help others, setting up a business, Fox And The Moon Infant Sleep Services, to guide families on how to get rest.

Emily’s story of becoming a mum begins in 2010, when she met her now-husband, Andrew, 35, on a blind date arranged by friends.

Within six months, the couple were living together, and once they graduated from university, Emily fell pregnant with Arthur in 2015.

Arthur was born two weeks late by emergency C-section, after Emily had to be induced.

The birth itself was traumatic, but this wasn’t the end of the new parents’ issues.

Arthur had asthma and a severe chest infection, meaning he had to stay in hospital until New Year’s Eve to receive treatment for his breathing.

All this sparked a mental health crisis for Emily.

Emily said: ‘That really affected me. My mental health really suffered. I was diagnosed with postnatal psychosis and OCD and had terrible panic attacks about his health.

‘I had really intrusive thoughts that something bad was going to happen to him.

‘I was so sleep-deprived, I would wake up and hallucinate that Arthur had died and wake my husband up. It was like night terrors.

‘I used to think he wasn’t meant to be here with me.’

Slowly, the mum recovered, and the parents began to think about having more children.

Emily was worried about the potential impact a second baby could have on her mental health, but decided to take the risk.

‘Although another child was always on the cards, we just didn’t think it would be possible due to the impact having Arthur had on my mental health,’ she said.

‘I got help for my anxiety, but I fell pregnant with Henry very quickly, while I was still having counselling.’

Recruiting a maternal mental health expert, Emily prepared for a planned C-section and continued having treatment for her anxiety.

Then, at 30 weeks gestation, she woke up to find her waters had broken.

Rushed to hospital, Emily was put on bed rest and given medication and steroids to help with Henry’s brain and lung development, but was in and out of labour for around a week.

After doctors realised Henry was in the breech position, they decided to deliver him.

But as Emily was being prepped for surgery, her medical team realised she was 9cm dilated and her body began demanding for her to push.

‘They had to give me a general anaesthetic and he was born very blue, resuscitated and taken to NICU,’ Emily said.

‘There was something wrong with his skin, but we didn’t know until we met him the following day.

‘He was very lucky to survive that neonatal period.’

It turned out that Henry has ichthyosis of prematurity syndrome, a rare genetic condition that causes rough, flaky, and scaly skin and can put babies at risk of suffocation in the womb.

Doctors also feared for baby Henry’s health in other ways – testing him for Down’s Syndrome and keeping him in NICU for three weeks, as he was born so young, weighing just 4lbs 7oz.

He went on to experience issues with his breathing, and was in and out of hospital for treatment for lung infections, sepsis, and low haemoglobin levels.

All this could have caused Emily to spiral into anxiety and intrusive thoughts again, but with the help of her therapist, she was able to overcome her struggles.

Having seen firsthand the mental impact of struggling to sleep as a new parent, in 2020 she decided to become a gentle sleep coach, to help parents find the causes of poor slumber and guide them on a path to better rest.

‘I’d always been fascinated by infant sleep and I was determined to find another way other than sleep training,’ said the mum.

‘It didn’t sit right with me to leave my boys to cry after everything they had been through.

‘There are different methods for different families and ages, but these all involve parents staying and comforting their child.

‘There’s a big myth out there and social media is saturated with it, that your child will never learn to sleep unless they self-soothe – but it’s not based on any evidence.

‘And women suffering with their mental health don’t want to hear their children crying for hours on end – there needs to be another way.

‘I analyse sleep diaries, how often children wake, when they’re waking, whether they’re tired, or are oversleeping, or if something is disturbing their sleep.

‘I look at how often babies are fed, whether they have sleep issues, allergies or sleep apnoea. It can all be improved and I’ve had great success with all of my families.

‘Teaching parents about sleep hygiene and a dark quiet room at night time, it all really helps.’

Emily also hopes to raise awareness of maternal mental health, and encourage anyone struggling to seek out help.

She added: ‘Talking about maternal mental health is really important and if sharing my story can help other mothers, it will be worth it.

‘My work aims to normalise maternal mental health, as well as regulating children’s sleep and behaviour.

‘But if we can all tell each other we’re doing a great job, we can all do our bit to help women.’