A plan by the nation’s biggest super fund to turn a golf club in Melbourne’s south-east into more than 800 new houses has angered residents in the suburb surrounding it, the federal MP for the area, and the local council. 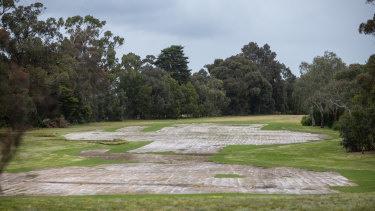 Hearings begin in earnest next month into the plan, which would see the disused Kingswood golf course turned into 823 homes – which would add around 2000 new residents to Dingley Village, which has a population of 10,000.

AustralianSuper bought Kingswood in 2014 and has fought ever since to develop it. Its first attempt was stymied in 2018 when Kingston Council abandoned its rezoning after 8000 resident objections.

Now, the state government has taken the decision off the local council and handed it to Planning Minister Richard Wynne, who will decide the land’s fate after hearing from the advisory committee he appointed.

The last round of golf was played on the course in 2018 and the club’s former manager said its proximity to homes had become a key reason for its merger and relocation to the Peninsula golf course in Frankston. 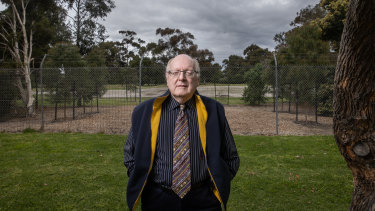 Kevin Poulter, president of the Save Kingswood Group. It is taking on Australia’s biggest super fund, AustralianSuper, over the former Kingswood golf course.Credit:Simon Schluter

Two community groups are fighting hard to convince Mr Wynne and AustralianSuper to radically downsize their plan for the land.

Kevin Poulter, president of the Save Kingswood Group, said AustralianSuper “had no right to purchase a golf course and expect it to be re-zoned. That’s not how planning works”.

And Leigh Grindley, from the Dingley Village Community Association, said AustralianSuper’s expertise was “in maximising financial returns”, not building new suburbs. “Once they’ve left with their profits, the community and council will be left to deal with the impacts.”

He said if AustralianSuper had revised its 2018 plan to include some sporting fields and a lower density housing development, “I don’t think they would have come up against any opposition”.

But opposition is what the superannuation fund, which manages $223 billion of its members’ money, now has in spades – including from federal Labor MP and shadow attorney-general, Mark Dreyfus, a former planning lawyer whose seat of Isaacs takes in Dingley Village.

He said the super fund paid too much for the property and was trying to cram too many houses onto it to make up for that mistake. A title search shows AustralianSuper paid Peninsula Kingswood golf course $99 million for the land. The super fund will pay Peninsula another $25 million once the land is rezoned for housing. “This is a massive over-development of a significant green open space in a beautiful community,” Mr Dreyfus said.

An AustralianSuper spokesman said the state government had put a process in place that the fund was now following. He said the super fund had talked to the community for over five years in the lead-up to the application, and had run open-days at the site, surveys, had done multiple leaflet drops, run community webinars, and advertised in the area.

Heath Wilson is chief executive of the Peninsula Kingswood Country Golf Club and ran Kingswood before it was merged with Peninsula. He said many of the fears of residents in Dingley Village were overblown and that while Kingswood had been a good golf course, its proximity to housing meant it would ultimately always need to close. “I worked there for eight years, and it never worked as a golf course because of those boundary issues.”

A spokeswoman for Mr Wynne said there had been “a robust planning process” behind the application to rezone the land, and that the minister would decide once the advisory committee had made its recommendations to him.

Opposition planning spokesman Ryan Smith said the government was ignoring the views of locals, and that this was becoming a disturbing norm. “Good governments bring people with them,” he said. The removal of Kingston Council from the decision-making process showed the government “will not tolerate an alternate view”.

Kingston mayor Steve Staikos has followed the proposed redevelopment of the golf course since it was sold in 2014. He said many in the council had been alarmed to see the proposed rezoning taken out of its hands after the community had so comprehensively rejected it in 2018. “We received 8000 objections so we decided to abandon the planning scheme amendment,” he said. “This new avenue was created by the state government.”

Cr Staikos said the council was concerned about what the redevelopment of Kingswood would mean for other courses in Kingston Council’s suburbs. “We’re home to 11 golf courses. What will happen to all of that green open space if this goes ahead in its current form?”