This article is part of Overlooked, a series of obituaries about remarkable people whose deaths, beginning in 1851, went unreported in The Times.

In 1945, the dancer Si-lan Chen sent a draft of her memoir to the writer Pearl S. Buck, with a letter asking for her thoughts on why she was struggling to get the attention of a publisher.

The problem, Buck explained, was that while Chen had dined with the Nationalist leader Chiang Kai-shek in revolutionary China, had been romanced by the poet Langston Hughes in Soviet Moscow, and had worked in Hollywood for the producer Joseph Mankiewicz, no one actually knew who she was.

The autobiography, Buck said, of a mixed-race girl growing up in Trinidad, studying ballet at the Bolshoi and choreographing films like “Anna and the King of Siam” (1946), was too focused on, well, her.

“The one thing which might have made your book interesting to the general reader,” Buck, who went on to win the Nobel Prize in Literature, wrote in her reply, “would have been new information or closer views of the famous persons you mention.”

Chen disagreed that she should be a secondary character in her own life story, and in 1984 she published her memoir with the cheeky title, “A Footnote to History (Dance Horizons).”

Si-lan Chen was believed to have been born in Trinidad on March 20, 1909, although, she wrote in the memoir, “I am not absolutely sure how old I am today.” Her mother, she explained, had lied about her daughter’s age to casting directors, leading to forged documents and mismatched records, some of which say she was born in 1905.

Her father, Eugene Chen, was a Chinese diplomat and lawyer who later helped establish a revolutionary government in Wuhan, China. Her mother, Agatha Alphosin Ganteaume, was Afro-Creole and had grown up in Trinidad in a convent.

The family, affluent thanks to Chen’s legal career, lived on a cocoa plantation in Port-au-Spain, the capital of Trinidad and Tobago.

Si-lan, who went by Sylvia when she was little, liked to watch the cocoa beans being crushed underfoot by plantation workers and would sometimes take part, stomping on the harvest along with them. “This is my earliest memory of a dance experience,” she wrote.

In 1911, the Chinese Nationalist Party leader Sun Yat-sen led a successful revolution against the Qing dynasty. With Sun’s encouragement, Si-lan’s father moved to China to help build a new, independent nation. The rest of the family remained in Trinidad before relocating to London, where the children were to complete their education.

There Si-lan studied dance at the illustrious Stedman’s Academy. “I was the youngest member,” she wrote, “colonial, cute and spoiled. Everyone pampered me.”

Her first public performance was as a buttercup flower. Eventually she became the school’s go-to dancer for nonwhite roles. She was first cast as an Indian boy in a production of “A Midsummer Night’s Dream” and then as Topsy, a slave child, in an adaptation of “Uncle Tom’s Cabin.” She would later use racial inscrutability as a device, creating dance movements that embodied a multitude of nations. 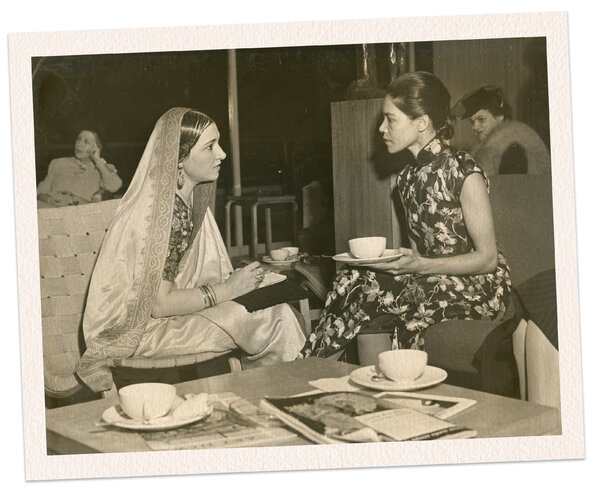 After her mother died, in 1926, Si-lan, her two brothers and her sister joined their father in China. The next year, Chiang Kai-shek purged the Nationalist party of leftist and communist elements, forcing the family to flee to Moscow. Once there, Chen began studying ballet with the Bolshoi theater’s dance company, though she soon found its methods too regimented and the Russian instructors stingy with their praise. “Each movement,” she complained, “had to be perfected and polished to escape reprimand.”

Chen learned of an experimental choreographer who had fallen out of favor with Soviet art critics for refusing to toe the party line. His name was Kasyan Goleizovsky. “This,” Chen wrote, “was my man.”

Goleizovsky, however, had a penchant for sexualized choreography, and comments were made about Chen’s race as a kind of corollary to the performance’s sensuality. As the scholar S. Ani Mukherji wrote, one Soviet critic said of Chen: “Her appearance is even reminiscent of a mulatto … And like a mulatto, she flirted with her choice of men in the audience.”

The allegation in Soviet newspaper reviews that her dancing showed no engagement with “proletarian ideology” particularly troubled Chen, who had lived a life of relative wealth and privilege. “I had never bothered to inquire of myself what ‘proletarian ideology’ meant,” she wrote, “because up until now it had not seemed any concern of mine.”

The criticism marked a turning point for Chen. She embarked on a new career as an ideologically conscious choreographer, enrolling in courses on Marxist-Leninism at the newly founded Communist University of the Toilers of the East (KUTV) in Moscow. She began teaching night dance classes to factory workers as part of the Theater of Working Youth; the director, she said, gave her the position to “help in breaking my bourgeois background.”

In the summer of 1933, Chen toured Soviet Central Asia and became enamored of the folk dances of Uzbekistan and Turkmenistan. By the time she gave a dance recital in Moscow that December, she had transformed herself into an artist intent on representing the new, multiethnic peoples united by communist internationalism.

“In herself and in her dances she is the new woman of the awakened East,” her brother Jack wrote in the recital notes.

It was in Moscow that Chen met the Harlem Renaissance poet Langston Hughes, who was in the Soviet Union to film “Black and White,” about race relations in the American South. The two began a flirtatious friendship (Hughes’s archives are filled with letters to her), though Chen mentions him in her memoir only in passing, writing that “Langston had been a sailor and walked like one.” She also included a poem he wrote about her: “I am so sad/Over half a kiss/That with half a pencil/I write this.”

Chen later met Jay Leyda, an American film student who was studying with the Soviet director Sergei Eisenstein. They fell in love and honeymooned in Leningrad before moving in 1937 to New York City, where Leyda was hired as an assistant film curator at the Museum of Modern Art. Because of the Chinese Exclusion Act, Chen had to leave the United States every six months and reapply for re-entry.

In New York, Chen joined the socialist New Dance Theater and finalized her repertoire, which included dances celebrating the poor and working-class of China (a beggar girl, a “rickshaw coolie”) and condemning bourgeois types (“a jingoistic American lady” and “that very ‘arty’ type of artist,” as she wrote in her notes). She also introduced American audiences to dances from Soviet Central Asia.

During the Second Sino-Japanese War (1937-45), she went on tour across the United States to raise money for the China Aid Council. An article about Chen ran in The New York Post with the headline, “Chinese Girl to Fight Japs with Dance of Propaganda.”

Despite her efforts to steer conversations toward the struggles facing the poor, reporters, show promoters and colleagues continued to sexualize and exoticize her. A flier for a 1938 performance hosted by the American League for Peace and Democracy read, “Spend ‘A Night in China’ with Si-lan Chen, Exotic Danseuse.” John Martin of The New York Times said of her New York debut that year: “She presents an attractive appearance, with a trig little figure and a lively and animated face. Her movement is crisp and smart and sure, with something of the characteristic clarity and precision of her race.”

Chen returned to now Communist-controlled China in 1959. Invigorated by what she described as a “new China, a socialist China,” she choreographed a ballet called “Hu-tung” (“Lane”), which celebrated Beijing’s street culture, with an emphasis on the games she saw children playing outside. It was accompanied by Bizet’s piano suite “Jeux d’Enfants.”

But the Chinese authorities reprimanded Chen for her choice of Western music — criticism that frustrated her because it was precisely this borrowing from and combining of cultures that was at the heart of her philosophy of dance. Further, it was how she understood her role in the world as a mixed-race socialist committed to building international solidarity.

Chen died on March 8, 1996, in California, having thought deeply about what it meant to move through the world. Her legacy is a belief that the body is a kind of world unto itself, as long as it remains open to the rhythms of the people.

Concluding her memoir, she wrote: “Our planet is large, yet it seems that people are always trying to restrict one another. The technique for survival is flexibility; with the help of those who love you, you move on, finding a place to function creatively in three worlds that should be one.”

Jennifer Wilson is a contributing writer for The Nation.