PETROL prices have soared to an eight-year high as panic at the pumps continues and motorists struggle to fill their tanks.

Latest government figures show the average price of petrol has now reached 134.86p a litre but there are ways you can save on fuel costs. 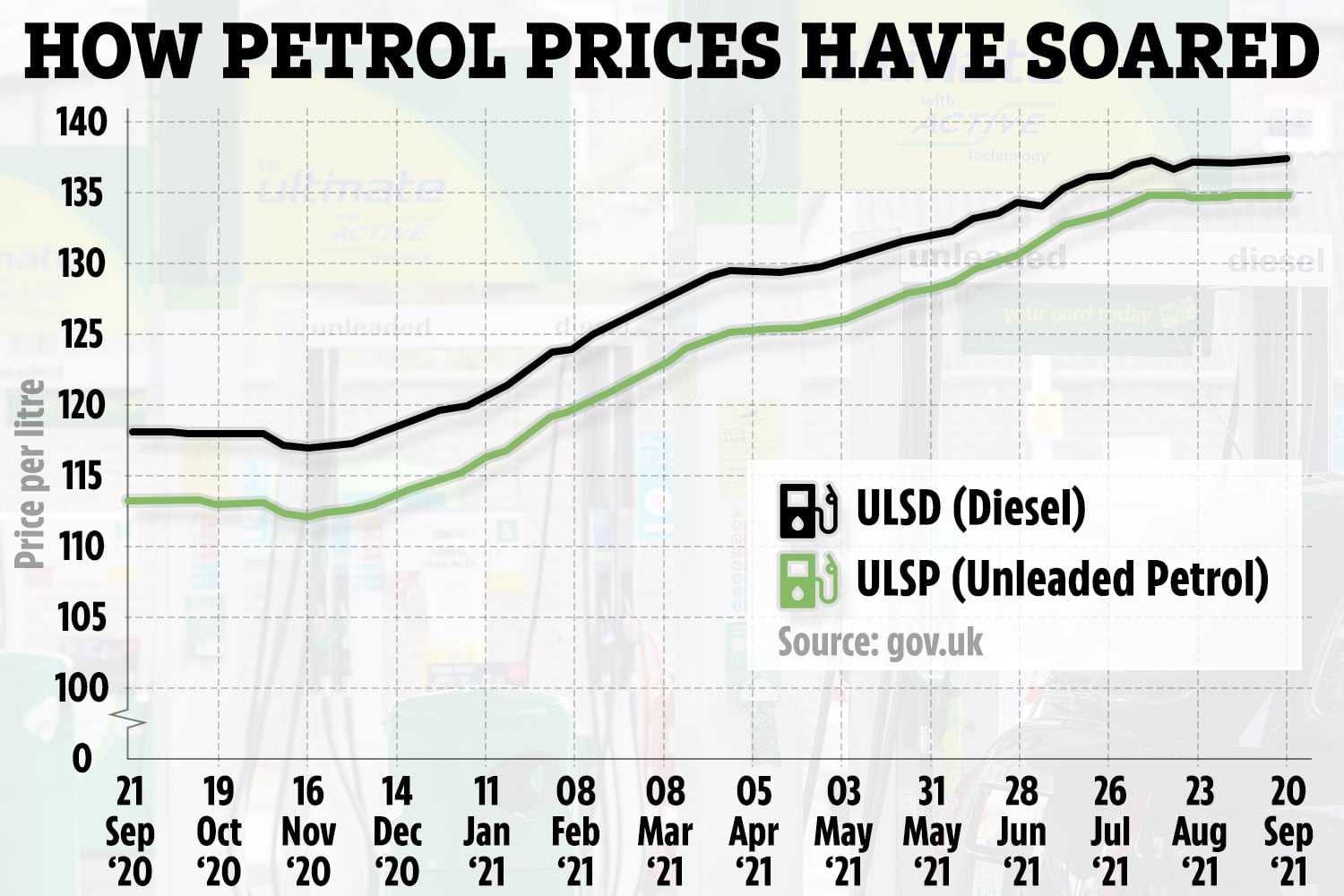 Some motorists have complained of paying more at the pumps though, with reports of drivers being charged as much as 154.9p for a litre of fuel.

The last time prices were higher was January 2014 when diesel reached 138.24p a litre.

Although unleaded fuel at the time was considerably cheaper than it is today at 130.57p.

Some people have accused petrol retailers of profiteering amid the nationwide fuel shortage.

Drivers are also being warned that prices could continue to climb.

The government has insisted there is enough fuel to go around but a shortage of lorry drivers means it is not getting to forecourts.

Craig Mackinlay, MP for South Thanet, said: “It’s disappointing to see reports of pump price profiteering in some areas of the country.

“The recent spike in demand for petrol and diesel caused by the confected panic has led to unnecessary pressure at our fuelling stations. But I would urge retailers not to take advantage of the situation – drivers have long memories.”

Robert Halfon, MP for Harlow, added: “Motorists are now being fleeced at the pumps at a time of great financial uncertainty.

“It’s the hardworking motorists and their families that depend on their vehicles to earn a living who are being hit hardest.”

Why petrol prices are rising

As well as panic-buying and stockpiling, the rising wholesale cost of fuel is also helping to pump up prices for motorists.

An RAC spokesperson said: “When it comes to pump prices, it’s a pretty bleak picture for drivers.

"With the cost of oil rising and now near a three-year high, wholesale prices are being forced up, which means retailers are paying more than they were just a few days ago for the same amount of fuel.

“We might yet see higher forecourt prices in the coming day, irrespective of the current supply problems.”

It’s now estimated that up to 90 per cent of independent service stations are running dry.

Many forecourts are also implementing a purchase cap, as drivers across the country have been stuck in mile-long queues to get fuel.

It comes as it’s revealed that key workers will get exclusive access to petrol pumps under emergency government plans.

Emergency measures could even see the army drafted in to drive fuel tankers to ensure petrol gets delivered.

Concerned drivers can take measures like checking their tyre pressure and not accelerating or braking too sharply to make their fuel last longer.

How can you save money on fuel?

Driving more efficiently and looking after your car by keeping tyres at the correct pressure are some of the simplest things you can do to get more out of a tank of petrol.

A cold engine uses up more fuel, so it's less efficient to go for lots of short trips when you could combine them into one journey, says the AA.

Car commuters could consider sharing lifts with colleagues. And remember to keep the air-con off unless you really need it.

Your top priority right now might be finding a forecourt that's not been run dry, but once things are back to normal it can pay to shop around for fuel.

The website petrolprices.com allows you to do 20 free searches on petrol stations near you to see who has the best rates.