Most Victorians don’t know Andrew Herington, but they know his works.

Herington, who died suddenly on April 24 at the age of 68, was a giant in the shadows of Spring Street politics for more than 40 years. 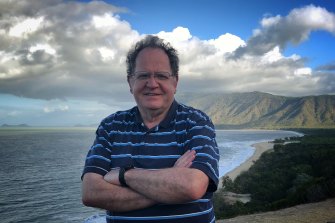 As an activist he worked with legendary advocate Ralph Nader, led the charge to ban leaded petrol and helped stop the extension of the Eastern Freeway not once but twice. He was the author of policy platforms for four state governments; pioneered power rebates for low-income households; was an architect of legislation making Victoria nuclear-free and one of the instigators of the West Gate Tunnel, the Metro Tunnel and Southern Cross Station.

And, when he died, he was driving a major reform of Victoria’s planning laws.

Herington will be deeply missed by his large family. But he will also be missed by generations of politicians, activists and public servants.

Former premier Steve Bracks described Herington as his “one of my secret weapons” and a “self-taught policy genius”. Former premier John Brumby called him “a real reformer” with a “brilliant brain”. Treasurer Tim Pallas called him “a magnificent ratbag”. And Planning Minister Richard Wynne said he hired Herington because “why would you not want to have one of the smartest people you’ve ever met work for you?”

Mark Birrell, a Kennett government minister who dealt with Herington in the 1980s and 1990s, described him as “a big figure”. “State politics can be a meeting place for people with great ideas and he was a living example of that,” Birrell said.

In politics, policy advisers are like Rumpelstiltskin – using the machinery of government to spin straw into electoral gold. It’s gruelling, combative, unglamorous work few people master. That’s why, when I was researching Catch and Kill, my book on the Bracks-Brumby era, I spent hours talking to the policy master: Herington.

“Government is a process of chaos,” he told me. “It’s just all these different things moving in different directions all the time, and putting some shape on it is what policy’s about; giving something that stands out from the rest, that people hang on to and think of … It takes a lot of pre-planning and then while you’re on the run you have to keep changing your direction and policy all the time.”

That’s why most staffers burn out or cash in after a few years – becoming politicians, academics, public servants and corporate executives. But Herington never burned out, never cashed in and never stopped.

“He kept pushing you,” said David White, a minister in the Cain government. “You don’t want advisers to be compliant. You want them to tell you, ‘Listen, mate, you’re a f—wit.’ … That’s exactly what he did.”

Rod Glover, who worked with Herington in Canberra and Spring Street, described him as “a policy combatant”. “Boy, he was persistent,” said Glover, deputy director of Monash University’s Sustainable Development Institute. “Even when he was outside of any position of formal power or authority he still had ideas and injected those ideas in a way that not many people do.”

When Andrew was a child, his father was in charge of security for atomic bomb tests in South Australia, including Maralinga. By the time Andrew was a teenager, in 1967, his father had died of a rare cancer.

Andrew matriculated from Caulfield Grammar as dux in 1969. Jane Herington said her brother was slated to speak to the assembled school and parents when several students were suspended for handing out anti-Vietnam War pamphlets.

In a speech punctuated by smoke bombs, “[Andrew] … expounded quite passionately about his views on the war,” Jane said. “He accused all the parents in the room of being murderers by sending their sons off to war. It might not have been the most diplomatic speech.”

At Melbourne University, Herington studied mathematics and quantum mechanics and – influenced by older brother Philip, state secretary of the Communist Party – threw himself into student politics. “I was basically an anarchist in university and I was opposed to anything parliamentary,” he said. 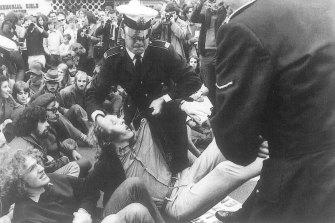 Andrew Herington (seated bottom left) at the May 1971 “Day of Rage” protest against the Vietnam War in Canberra.

Herington got married on the day of the 1972 federal election, but didn’t vote for Whitlam. “After he let everyone out, all the draft resisters that we knew, we thought, ‘Labor might not be so bad after all’,” he said.

In 1976 he organised a community campaign against construction of the Eastern Freeway on behalf of the Collingwood and Fitzroy councils. When it succeeded, Herington’s activism shifted to public transport expansion, uranium-mining bans and lead-free petrol. In his spare time he volunteered for Frank Wilkes, the leader of Victorian Labor, and became heavily involved with Friends of the Earth.

Journalist Stephanie Bunbury also worked in the ramshackle Friends of the Earth office in Smith Street, Collingwood, and was inspired by the energy of the young Herington. “He just worked all the time,” she said. “Every minute would be utilised.”

During the early 1980s, Herington was also a frequent visitor to a share house in George Street, Fitzroy, where lawyer and journalist Jon Faine lived. “It was debauchery central and Andrew was part of that,” Faine said. “He wasn’t one of your theatrical, show pony types trying to climb the greasy pole. He was interested in the outcomes, in serious policy work … He was an activist’s activist.”

In 1981, Herington arrived back from a stint in the US with Nader just as John Cain replaced Wilkes as State Opposition leader. He ran Labor’s transport campaign in the 1982 state election. When Cain won, David White recruited Herington as his chief of staff. 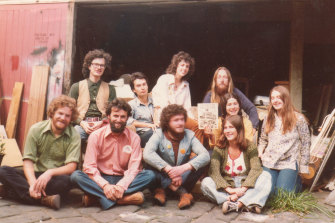 Andrew Herington (front row, far left in green shirt) with Friends of the Earth in 1979.

Herington’s activist friends were surprised he joined Labor. “I always thought he would be an outsider,” Bunbury said.

Then again, as business leader Elizabeth Proust explained, 1982 was a year for outsiders in Victorian politics. Proust – who was Cain’s chief of staff – said it was important to remember what Victoria was like after 27 years of conservative rule.

“Victoria was in a time warp,” Proust said. “If you were a woman you couldn’t belong to the MCC [Melbourne Cricket Club] or the VRC [Victorian Racing Club], Sunday was dead, liquor licensing laws were archaic and [the change of government] was like the cork out of the champagne bottle. So much was done at a frantic pace.

“Andrew is one of the ones who stands out because he was widely read, engaging, really quite fearless if he thought something was wrong.” 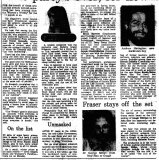 The Age, May 27, 1982: Andrew Herington, “new backroom boy” of the Cain government after 27 years of conservative government in Victoria.Credit:The Age

“After that,” White said, “the chairman of the Gas and Fuel Corporation would not let Andrew into the building on the ostensible reason that he wasn’t dressed properly.”

Herington oversaw legislation that declared Victoria a nuclear-free state. He was also called in when Victoria’s world-first initiative to ban tobacco advertising – campaigned for by Dr Nigel Gray and initiated by policy adviser Peter Worland – hit trouble with outdoor advertisers. “He just won the arguments with everyone,” White said.

Birrell, then shadow minister for Health, said it was easy to forget how “hellishly controversial” it was to ban tobacco money from sport in an era when Marlboro bankrolled the tennis and Benson & Hedges the cricket. “Everyone thought it was all impossible until that legislation went through,” he said. “It gave every government around the world confidence because it worked.”

By the time Labor lost the 1992 state election, Herington was no longer a policy adviser. Instead, he spent the next seven years working for Parks Victoria, Melbourne Water, VicHealth and the Commonwealth Ombudsman while volunteering for various Labor policy committees.

In 1995 Herington crossed paths with Steve Bracks, who was chairing the ALP policy platform committee for the 1996 election. 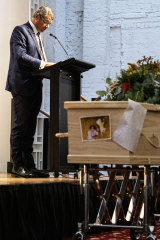 Former Victorian premier Steve Bracks delivers a eulogy for Andrew Herington, “one of my secret weapons”, at St Kilda Town Hall on April 30.

Delivering Herington’s eulogy at St Kilda Town Hall, Bracks recalled being “struck by Andrew’s creative energy. He didn’t have one policy idea. He had dozens. And he could back up those ideas with serious policy muscle.”

But Herington didn’t return to Spring Street when Bracks won office in 1999. Instead, he signed on as Jenny Macklin’s chief of staff – and was in Canberra for the 2001 Tampa election.

By February 2002, Herington was back in Melbourne as Bracks’ new policy director at the first floor of 1 Treasury Place.

Bracks wanted Herington to revamp the policy platform for the 2002 election, but there was a catch: up on the second floor, the Department of Premier and Cabinet – led by Terry Moran – wanted political staffers to stay out of policy.

Ultimately, Bracks – who defied Labor’s left and right factions to hire Herington – wanted creative tension. “There’s some criticism that Andrew ranged too far and wide on policy. I liked that,” he said.

Between 2002 and 2006, Herington had his most influential and confrontational period, writing two policy platforms for Bracks and co-authoring A Fairer Victoria, a $1 billion social policy package targeting disadvantage.

“One of my weaknesses,” Herington said in 2011, “is that I’m probably too combative, but I won’t step down in front of Sharon. I’ll come back at her. And I think the good thing is that rationality prevailed and that you could win an argument. But you did have to accept your losses … Ultimately, you are part of a team.”

After Bracks stepped down in 2007, John Brumby said that he “looked to Andrew for the big policy ideas particularly in areas like transport and climate change” – Herington was one of the instigators of the Metro Tunnel.

He felt he received a fair hearing from Brumby, but noticed a shift among the advisers. “Chiefs of staff, directors’ meetings used to be a barney, but a pleasant barney … As it went on the people who came tended to be a bit less experienced than the people they were replacing and therefore more prone to following the leader,” he said. “I was pretty much on my own in the end.”

After the 2010 election loss, Herington returned to his activist roots, leading a community campaign against the Napthine government’s plans to extend the Eastern Freeway through Fitzroy. He churned out a mountain of letters, submissions, requests and articles – and ended up going toe-to-toe with the government’s legal silks in planning hearings.

When Labor returned to power in 2014, Herington returned too – working for Pallas in treasury and Wynne in planning as the Andrews government’s massive infrastructure program raced to keep up with population growth.

“He would be at the pinnacle as a policy adviser. He was without peer,” Wynne said.

Herington also wrote Making a Difference – a book detailing 25 policy ideas that changed Victoria – and, as the Andrews government’s last link to the Cain era, came to be seen as a mentor by some policy advisers.

The day before he died, Herington met with Wynne’s office and public servants, still arguing the case for reform.

“I was in an online meeting with him on Friday afternoon,” one public servant told me. “After the meeting we exchanged a series of emails, with him urging me to continue to pursue the true course of reform on a planning matter.”