Tenants are struggling to find a home in Australia’s competitive rental market, and experts say the only way to succeed is to be fast and efficient during the application process.

Vacancy rates across the country are at near-record lows and mostly were stagnant or barely improved in the December quarter, which has led to long lines at open inspections and some tenants submitting dozens of applications.

“You want to be the first one at the first inspection,” she said. “[Property managers] want to approve one immediately because they don’t want to do another inspection.”

It could be possible to organise an early, private inspection with the leasing agent if a prospective tenant called soon after a property was listed, Navarrete said. However, popular properties could have the private inspection converted into an open.

She said it was important to be organised while looking for a home – which can include preparing applications before an inspection, talking to references (including for pets) to make sure they’re ready to write one or take a phone call, and writing a cover letter to introduce yourself to the landlord. 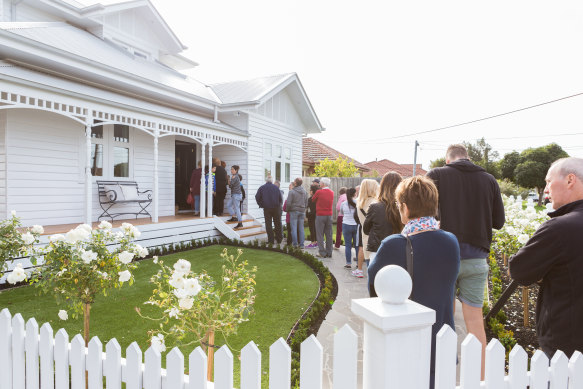 Tenants are facing tough competition to find a home in major cities.

Getting this all done ahead of an inspection is vital as a tenant can apply the moment they leave an inspection, giving them the best chance of being approved.

While this could be time-consuming, Tenants Victoria lead community education lawyer Ben Cording said new application software like 2Apply had lessened the burden on some renters.

“There’s been a movement towards a centralisation of applications,” he said. “If you’re applying for 60 places they’ve tried to make that easier, but that just makes you more anonymous.”

These services made it hard to make an impression on agents and therefore landlords, Cording said.

“They only have the forms and the agent’s impression of you at the open to make any judgement,” he said.

Navarrete said it was best to be friendly and to ask questions at the inspection so the agent will remember you in a positive light.

Speaking to your previous property manager ahead of time and smoothing over any issues during the tenancy, such as late payment of rent or any damage to the property, would help improve the reference they gave to any prospective agent, she said.

“It shouldn’t be a barrier but it’s always important to maintain a good relationship with your agent or landlord,” Navarrete said. “If you’re concerned about anything in the past, reach out to your agent and talk about it. Don’t be afraid to ask those questions.”

Offering a longer lease could also improve the chance of being approved, she said.

Tenants are also offering more money to get accepted, even though the practice of solicited rental bidding is outlawed in some states, Cording said.

“We know from data that one in five renters [in Victoria] offer more rent,” he said. “We don’t encourage that but it certainly goes on.”

Tenants with pets could struggle to get approved, Cording said, and may have to consider rehoming pets while trying to find a new rental. While it was illegal in some states to unreasonably refuse a tenant a pet, landlords could in some cases opt to accept an application from a tenant without a pet over an applicant with one.

Patterson Ross said the tight rental market meant tenants had little choice but to hand over as much data as property managers asked for, and to participate in the heavily landlord-favoured system.

“We have this competitive system over an essential service, the controller of this service has an enormous amount of power and whatever they recommend is effective,” he said.

Patterson Ross said if tenants felt they had already tried everything to secure a rental, they may have to move further out of their desired neighbourhood or rethink the type of home they wanted to live in.

“That’s not actually an acceptable answer but that’s what people are doing to get around this low vacancy rate,” he said.

Systemic change was needed to prevent rental market conditions which made it difficult and time-consuming to find a home, Patterson Ross said. He suggested a lottery-style selection process for properties with multiple acceptable applicants, or building public and social housing to end the chronic undersupply of homes.

“The idea is to take away the competition aspect,” Patterson Ross said. “We’ve built in this endemic undersupply where the tenants are always competing for landlords.

“The more we can get it out of the tenants competing for an essential service the healthier the market will be.“

Most Viewed in Property