SARAH VINE: Prince Harry’s portrait of Camilla the villain bears no resemblance to the earthy, authentic and engaging lady I’ve got to know

Every time you think this whole mad Harry saga can’t possibly get any worse, it goes right ahead and does precisely that. Having ripped into his brother and father, the ‘Spare’ has now turned his ire on Camilla, Queen Consort.

It’s like something out of a Disney fairy tale: a wicked stepmother — scheming, manipulative and as ruthless as she is ambitious — who takes the place of the king’s gentle and beautiful first wife and subjects his children to a cruel ordeal.

His father, meanwhile, is too weak to resist, too in thrall to her charms and oblivious to her tricks which, in this instance, include manipulating the media and public opinion like some latter-day Svengali in pearls.

She is menacing, ‘dangerous’ even. ‘She began to play the long game, a campaign aimed at marriage and eventually the Crown — with Pa’s blessing,’ Harry writes. 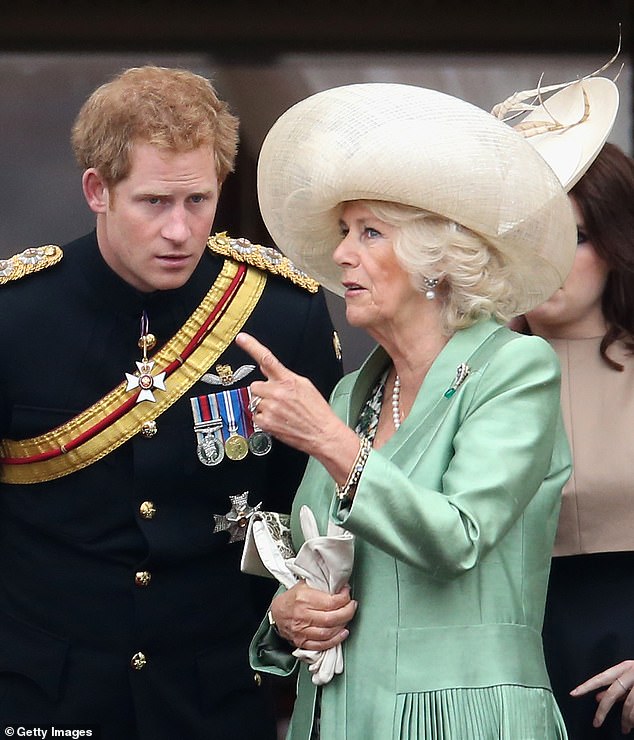 Having ripped into his brother and father, the ‘Spare’ has now turned his ire on Camilla, Queen Consort

He then goes on to accuse Camilla of leaking details to the Press about her first meeting with Prince William, adding ‘stories began to appear everywhere, in all the papers, about her private conversation with Willy, stories that contained pinpoint accurate details, none of which had come from Willy of course. They could only have been leaked by the one other person present’.

Harry’s TV interviews to plug the book have appeared strangely contradictory. Initially, he told ITV’s Tom Bradby — and his UK audience — that he was not ‘scathing’ towards Camilla in his book.

Yet in conversation with an American interviewer, Anderson Cooper, ‘scathing’ seems to be the only appropriate word.

‘She was the villain, she was a third person in the marriage, she needed to rehabilitate her image,’ Harry said.

Bizarrely, however, in a third interview — for Good Morning America — Harry poured yet more confusion on the case, insisting he does not think of the Queen Consort as an ‘evil stepmother’ and adding: ‘I have a huge amount of compassion for her, you know, being the third person within my parents’ marriage. She had a reputation, or an image, to rehabilitate.’

So which is it, Harry? 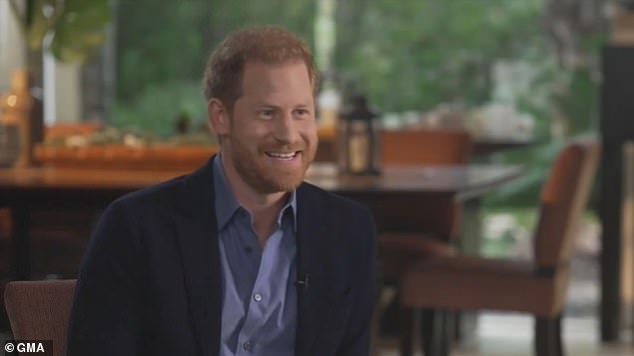 In a third interview — for Good Morning America (pictured) — Harry poured yet more confusion on the case, insisting he does not think of the Queen Consort as an ‘evil stepmother’

Whatever his true feelings towards Camilla, Harry does at least admit that he and his brother tried to prevent their father from marrying her.

When asked why by Anderson Cooper, he replied, dismissively: ‘We didn’t think it was necessary. We thought that it was gonna cause more harm than good and that if he was now with this person, that — surely that’s enough. Why go that far when you don’t necessarily need to?’

In other words, you can have her as your mistress, Pa. But don’t you dare elevate her to the status of wife, put her on a par with my mother.

He doesn’t actually spell it out, but it’s clear what he’s implying when he talks about Charles ‘not necessarily’ needing to marry Camilla. She’s not good enough, she’s beneath him. Not just Charles, but Prince Harry, too.

This is low-down, vicious stuff. It reeks not just of entitlement and snobbery —Camilla, as a divorcee and a mistress, not worthy of becoming Queen Consort — but also of sexism, of age-old royal prerogative. Which, for someone as supposedly woke and progressive as Harry, is a little rich.

But more than anything, it speaks to Harry’s increasingly obvious and deep-seated rage towards his father which is, ultimately, the source of so much of his angst.

In his fevered anguish, he seems to believe that Charles betrayed Diana and that this ultimately helped lead to her tragic and premature death. And which, he seems to think, gives him carte blanche to exact revenge by any means necessary. 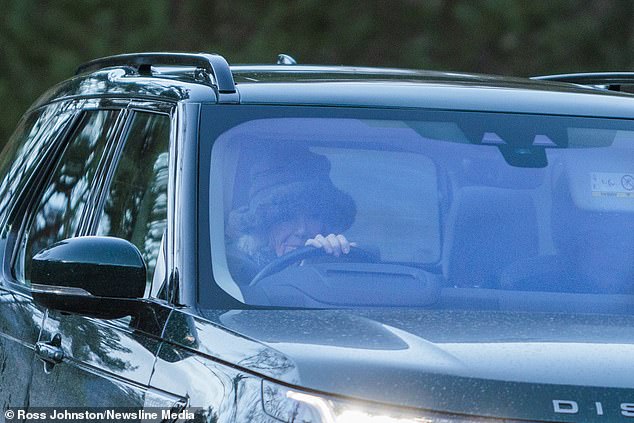 It reeks not just of entitlement and snobbery —Camilla, as a divorcee and a mistress, not worthy of becoming Queen Consort — but also of sexism, of age-old royal prerogative

And at the centre of that revenge is Camilla. In Harry’s child-mind — which is what we are really dealing with here, the mind of a 12-year-old boy still howling in pain at the loss of his beloved mother — Camilla is the root of all the evil that ever befell his family.

If Camilla hadn’t been hanging around polo fields, looking all fresh-faced and fun, while Diana moped in her bedroom, swooning over George Michael and dreaming of dancing with John Travolta, everything would have been just dandy.

Of course, anyone who knows anything about the marriage of Charles and Diana knows that it was a far more complex situation than that.

Theirs was an ill-conceived match that should never have taken place: Diana was far too young and naive, Charles already besotted with Camilla.

They were emotionally and intellectually ill-suited and shared very little by way of interests and ambition. Far from being a fairy tale, their marriage was a nightmare from which both sought to escape almost from the start.

But Harry doesn’t see it that way in his Disneyfied vision of life — which also leads him to cast his wife, the Duchess of Sussex, as Cinderella and his sister-in-law, the Princess of Wales, as a better-looking incarnation of the Ugly Sisters.

The Press are vultures, Dodi Fayed is the handsome knight, come to free the beautiful princess with her eyes ‘like fluffy love-hearts’. And Camilla . . . well, Camilla wears a pointy hat and rides a broomstick, and that’s that. 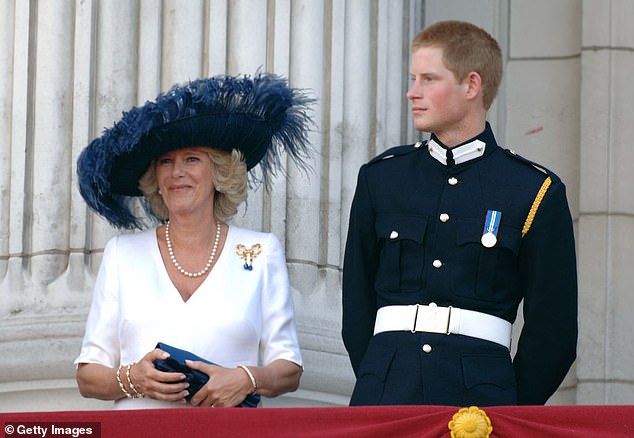 In Harry’s child-mind — which is what we are really dealing with here, the mind of a 12-year-old boy still howling in pain at the loss of his beloved mother — Camilla is the root of all the evil that ever befell his family

And let’s face it, yes: Camilla did come between Charles and Diana. And yes, it must have been incredibly painful for the young Harry to see the Queen Consort ultimately take the place of his mother, not just in the affections of his father but also of the nation, as over the years she has worked hard to prove her worth to the British people.

But just because the circumstances of someone’s life may be tricky, does not mean that they themselves are intrinsically bad. People are complicated, life is complicated; love, especially, is complicated.

But Harry can’t see this. He is blinded by the red mist and the pain of his own loss. And so, as is often the case with people who are in a great deal of emotional pain, he is lashing out.

In my experience, the more hurt people are, the more they try to hurt others, not always consciously — but often very effectively.

It’s a form of emotional transference that brings short-term relief — but causes only even deeper hurt, since it ultimately alienates them from those who love them the most.

This is what Harry is doing to King Charles. He wants to punish his father for all the things that went wrong with Diana, and so he’s attacking the person Charles adores the most: Camilla.

The love of his father’s life, his rock, his soulmate, in many ways his saviour.

It’s also hypocritical beyond belief. Because, of course, Harry never tires of telling us how devastating the so-called ‘attacks’ on his wife have been to his and Meghan’s mental health. How the slightest criticism or questioning of her motives contributed to her suffering horribly; how, in the end, it all became so terrible they had no choice but to flee Britain.

Surely he of all people should know how it feels to see the person you love most in the world distraught, unfairly and maliciously cast in a negative light. Especially when much of it is untrue. Because, as with so much of Harry’s rantings, he is mistaken about Camilla’s relationship with the Press. 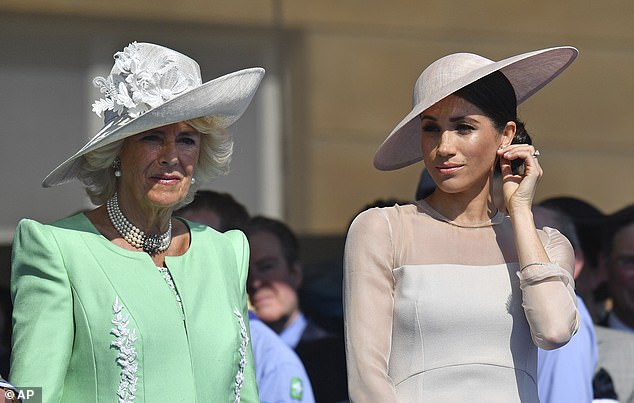 I have met her on a number of occasions, often in very informal settings, and she has never once tried to manipulate me, or mentioned any other members of the Royal Family, even in passing.

It’s just not her style. If she does seek to win people over, she doesn’t do it by trashing others, as Harry does, but by minding her own business, keeping her head down — and getting on with her work. Which few would deny she does very effectively.

And take the question of Camilla leaking her conversation with William. It’s simply not true that she relayed details to the Press.

The idea that Camilla is some sort of ‘villain’ is, quite honestly, absurd. It’s the stuff of conspiracy theories and silly TikTok videos (which, judging by some of the nonsense he’s spouting, Prince Harry seems to spend far too much time looking at). She’s not ‘dangerous’ or manipulative, over-ambitious or scheming. I don’t know her intimately; but I can honestly say that Harry’s caricature of her bears no resemblance to the person with whom I’m familiar.

The real Camilla is just like many other women of her class and generation. She’s warm and engaging, she doesn’t stand on ceremony and has a wicked sense of humour.

She has an easy, throaty laugh and a lively intellect, and loves nothing more than a glass of wine and a spirited discussion — politics, food, children, the state of the nation. You name it, she has an opinion on it.

She’s passionate about her family, her children (who are extremely nice and well-adjusted, under the circumstances) and about causes close to her heart, particularly domestic violence against women.

She really does light up a room with her generous energy. It’s never about her, either: she is one of those people who is always asking questions about the other person, who always makes you feel like your life is so much more interesting than it really is.

And Charles obviously adores this about her: you will often catch him looking at her, a little ruddy in the cheeks, pleased as punch.

And while he is a bit of a stickler for the old etiquette (he once chastised me loudly for unthinkingly leaving the room before his wife), she honestly couldn’t give two hoots. She goes along with it for the sake of appearances, but really, it doesn’t matter the slightest to her.

There is an earthy authenticity to Camilla that is, in the flesh, captivating. Above all else, she is comfortable in her own skin. And that, as we all know, is very hard to resist.

If people are charmed by her, it’s because of this, not because of some nefarious campaign of Press manipulation and self- promotion. The only person engaged in that sort of game is, I’m afraid, Prince Harry.

Quite what his ultimate aim is I struggle to see: at this rate, his future just looks like an ever-depreciating round of spilling the royal beans until there are no more left to spill (what then, I wonder, rent-a-Duke?).

But one thing I do know: you don’t become a saint by painting everyone around you as sinners.