Radiant in white! Sophie Wessex is stylish in a statement blazer and floral skirt as she meets the President of Ethiopia during her solo Africa tour

Sophie Wessex showcased her fashion credentials last night when arriving in Ethiopia for the next leg of her Africa tour.

In her first appearance in the country, the Countess, 57, met President of the Federal Democratic Republic of Ethiopia Sahle-Work Zewde at the Presidential Palace in Addis Ababa.

The mother-of-two looked typically stylish in a white blazer teamed with a pink patterned skirt as she chatted with Sahle-Work.

She had spent the last few days in Malawi, where she gave a speech saying how ‘proud’ her late mother-in-law the Queen was of the Commonwealth. 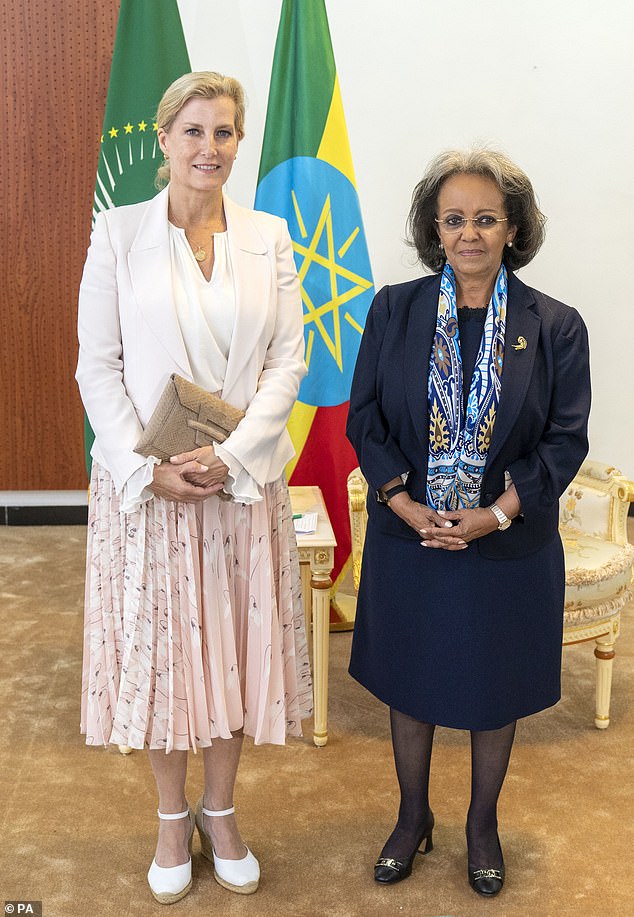 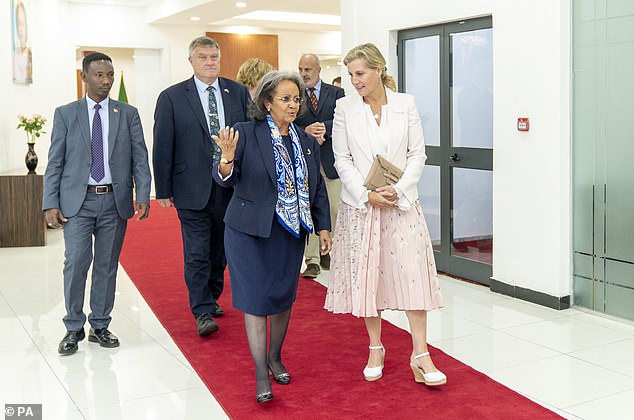 In her first appearance in the country, the Countess, 57, met President of the Federal Democratic Republic of Ethiopia Sahle-Work Zewde at the Presidential Palace in Addis Ababa

During her final appearance in Malawi,  Sophie looked pensive as she visited a neonatal unit at a hospital to meet premature babies.

Staff gathered to greet the royal as she wandered the wards of Kamuzu Hospital, stopping to say hello to small children who are patients and chatting with doctors about the facility.

She was seen clasping her hands together as she met young patients on the pediatric unit, and also took a trip to the Kangaroo maternity department to speak with expectant mothers.

Elsewhere, she told how her ‘dear mother-in-law’ the late Queen was ‘so happy’ for the people of Malawi at the country’s elimination of the eye disease trachoma. 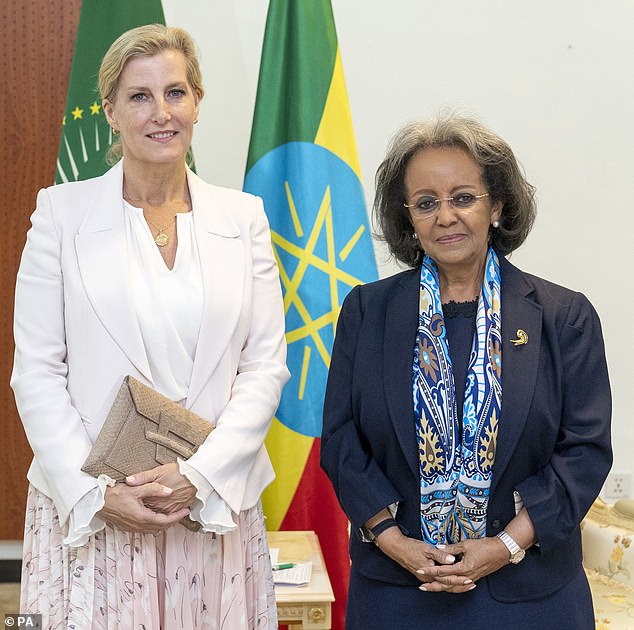 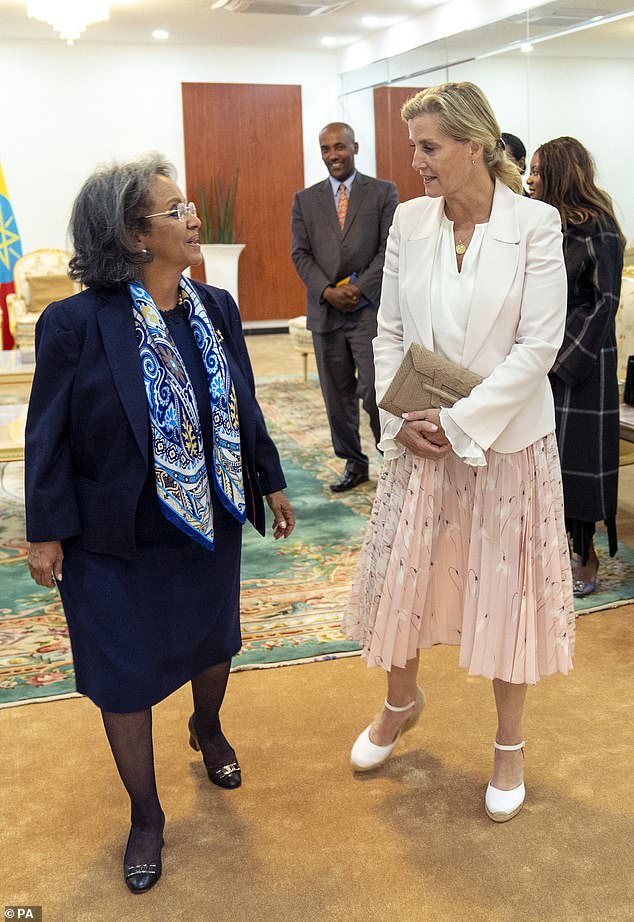 Sophie, who is currently on a lengthy solo tour of Africa and has visited a number of countries in the past two weeks, appeared in good spirits

Sophie, in a speech in Malawi to mark World Sight Day, said the Queen knew the summer before she died that the countess would be returning to the southern African nation soon to celebrate its success in battling the condition, which can cause blindness.

The countess, global ambassador for the International Agency for the Prevention of Blindness (IAPB), said: ‘We owe a dept of thanks to Her late Majesty for this incredible legacy and we say ‘zikomo’ (thank you).’

The Queen Elizabeth Diamond Jubilee Trust Fund focused – on the instruction of the Queen – on offering financial support to help combat avoidable blindness across the Commonwealth including in Malawi.

Sophie travelled to Malawi five years ago as vice patron of the Trust, and said the Queen had been ‘so moved’ to hear of the work being carried out. 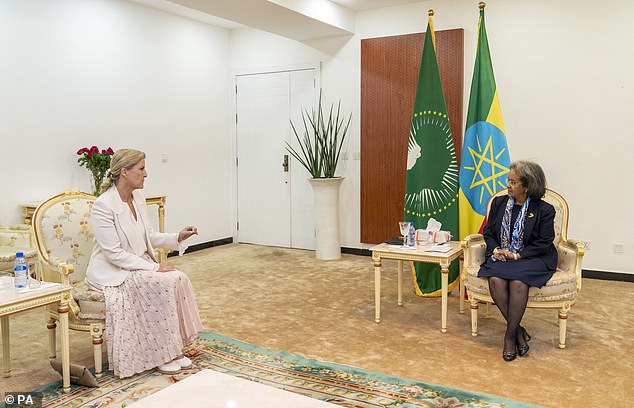 The countess said: ‘The success we celebrate today means that future generations of Malawians will not have to face the high risk of blindness caused by trachoma – the irritation, the terrible pain, the scarring and the darkness, nor the prospect of not being able to learn, work or cook without help and support.

‘Her late Majesty Queen Elizabeth the Second, my dear mother-in-law, was so proud of the Commonwealth and all that it stood for.

‘Last time I returned from Malawi, when I had travelled on her behalf, as vice patron of her Trust, I told her all about my visit and she was so moved by the amazing work taking place here.

‘This summer, before she passed away, she also knew that I was returning to Malawi and why.

‘She knew of Malawi’s achievement and was so pleased that this was made possible by the fund, with eyesight being its principle objective. She was so happy for Malawians.’ 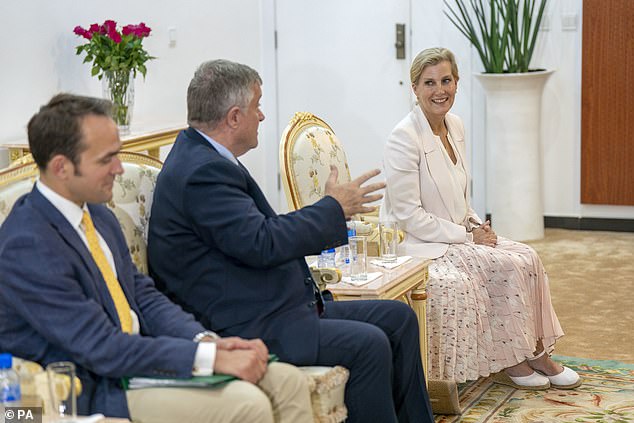 Sophie said she had a ‘heart full of joy’ to be back in Malawi again to witness the formalisation of the achievement, saying: ‘Today is a day that I will remember for the rest of my life.’

She brought with her a personal letter from the King to the country’s president, Lazarus Chakwera, expressing his congratulations.

Charles wrote: ‘This is a remarkable success, and a true testament to all those whose hard work, dedication and commitment has led to Malawi becoming the first country in Southern Africa to eliminate this devastating, neglected tropical disease as a public health issue.’

Malawi is the first country supported by the Trust to reach the milestone of trachoma elimination.

During her trip, Sophie visited Mgawi Village where she met eye surgery patient Litens Dalali at her home following her treatment for chronic trachoma. She was joined by surgeon Gladys Ntwana.

The countess sat on a mat on the ground as she chatted to the woman and met her family, stroking the head of one youngster as the child lay cuddled against a female relative.

She also travelled to the Maganga Clinic in Salima to meet others who have benefitted from medical treatment.

Earlier this week, the royal was in Ethiopia, and was pictured looking pensive as she flipped through a book of condolence for the beloved Queen while in the country.

In one photo she appeared to be reading a message from an ambassador, Victor Adeleke, seemingly penned on September 12 – just a few days after the Queen’s passing.

In his note, he penned: ‘The world will surely miss you! Mama to His Majesty King Charles.

‘On behalf of all members of the Embassy of Nigeria, here in Addis, we say journey well to your Lord. Rest in perfect peace.’