Their delusions and hypocrisy are beyond parody: As Apple staff claim it’s racist and sexist to force them back in the office, ex-No 10 supremo STEVE HILTON heaps scorn on the ‘hippy-dippy mumbo-jumbo’ of the pampered whingeing millennials

Steve Hilton served as director of strategy for the British Prime Minister David Cameron and hosts the podcast California Rebel Base.

Well at least she can be grateful that she’s not running to become boss of the tech giant Apple.

Liz Truss has been vocal in her demand that civil servants get back to their desks and abandon the work-from-home habits that became established in Covid lockdowns.

Only a third of the bureaucrats in Truss’s own Foreign Office are turning up for work – the worst record of any Government department – and she has had enough.

She said: ‘We need more people to work in the office. I think that’s very important.’ 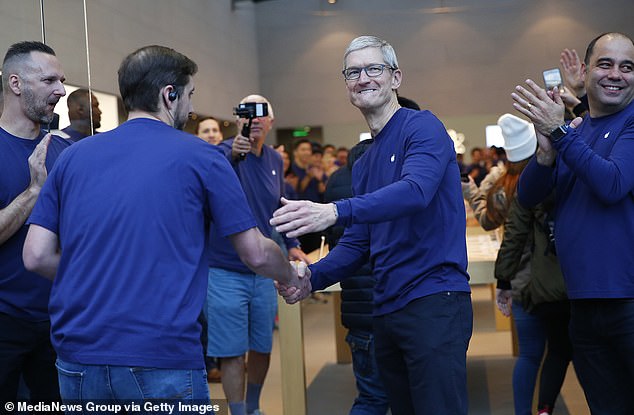 Apple chief executive Tim Cook recently told his employees that ‘in-person collaboration is essential to our culture’, announcing a new company policy that would require them to go into the office – shock horror! – three days a week

It’s a sentiment shared by Apple chief executive Tim Cook, who recently told his employees that ‘in-person collaboration is essential to our culture’, announcing a new company policy that would require them to go into the office – shock horror! – three days a week.

Three days a week… Can you imagine? How inhumane! Somehow, I think Liz Truss will have more luck coaxing Whitehall workers out of their pyjamas and into something resembling professional business attire than Cook, who has the misfortune of being saddled with perhaps the most comically entitled workforce on the planet.

The pampered woke millennials who seem to speak for Apple employees circulated a petition protesting against management’s three day-week edict, and insisting on their right to work from home whenever they please – even if that means never coming into the office.

As you might expect from a tech company in California, in an open letter the resistance was couched in suitably hippy-dippy, futuristic corporate HR-babble: ‘Office-bound work is a technology from the last century, from the era before ubiquitous video-call-capable internet and everyone being on the same internal chat application.

‘But the future is about connecting when it makes sense, with people who have relevant input, no matter where they are based.’

Well, if you can make sense of that… congratulations, get a job in Silicon Valley. But the naive and somewhat anti-human techno-utopianism was not, by a long way, the most disturbing message to emanate from ‘Apple Together’, as the employee protest movement is called.

The truly striking aspect of their campaign – and a chilling one for every employer in the UK and around the world, given the trendsetting role of California and its tech giants – was the way Apple workers framed their complaint.

Not, like any normal person might think, as simply a brazen attempt to maintain a lifestyle free from the humdrum requirements of commuting to work and interacting in the real world with actual people.

Oh no: it is all, as everything inevitably has to be these days, highly political. It’s about changing the world.

Because, as one sentence shows in the Apple workers’ open letter that is quite honestly beyond parody, the fight for the right to work from home is, we’re now told, part of the historic struggle for social justice, diversity, equity, inclusion, ‘climate’… and every other fashionable Leftist cause du jour.

Here is that sentence, exactly as it appears in the Apple employees’ letter: ‘… being in the office at least three fixed days of the week, will change the make-up of our workforce. It will make Apple younger, whiter, more male-dominated, more neuro-normative, more able bodied, in short, it will lead to privileges deciding who can work for Apple, not who’d be the best fit.’

I’ve seen a lot of vapid, pretentious, pseudo-philosophical claptrap in my time. (Yes, and I’ve written my fair share of it, too.)

But honestly: have you ever heard such ludicrous, self-serving – and deeply delusional – mumbo-jumbo? 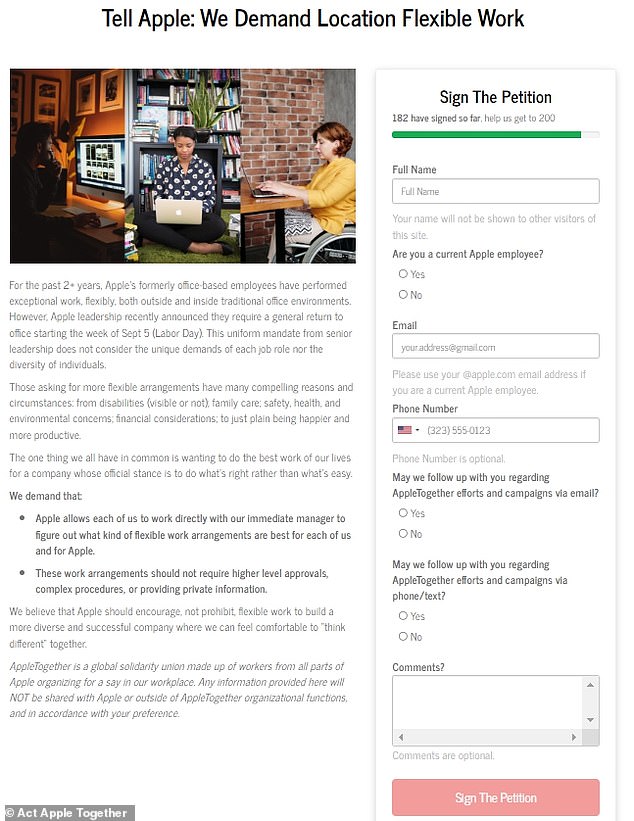 As you might expect from a tech company in California, in an open letter the resistance was couched in suitably hippy-dippy, futuristic corporate HR-babble

Let’s take a closer look. Why is it racist to require workers to show up in the office three days a week?

Silly question: everything is racist, obviously. Duh! No need to explain why: everyone knows the workplace is a central component of the white-supremacist, male-dominated patriarchy.

Which is why going to work in an office is also sexist. (No matter that according to one recent analysis, more than 70 per cent of office workers in the US are women.)

And if workplaces are so viciously hostile to anyone who isn’t ‘able-bodied’, it does make you wonder what was the point of the billions spent by companies to comply with the 1995 Disability Discrimination Act and its successor the Equality Act (as well as its American counterpart, the Americans with Disabilities Act).

But the element of the Apple employees’ statement that will leave most people slack-jawed with incredulity (after a few minutes thumbing the dictionary) is the apparently sincere concern that a return to working in the office three days a week will leave Apple ‘more neuro-normative’.

Neuro-normative! Get ready for this one, it will undoubtedly be coming to your place of work very soon – if it hasn’t already.

In its literal sense, it refers to the absolutely unobjectionable – indeed noble – principle that we shouldn’t discriminate against those whose mental function is different from most people’s.

Autism is the best-known example. People with autism are said to be ‘neurodiverse’, rather than ‘neurotypical’. They may have difficulty with social interactions, speech, adapting to change… and so on.

Language like ‘neurodiverse is intended to make the point that people with autism are not ‘worse’ or ‘better’ than others, simply that their brains function differently. 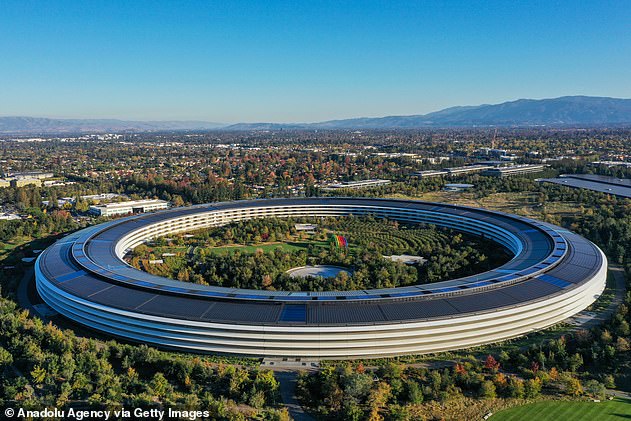 So Apple’s Tim Cook – and all the business leaders struggling to face down the demands of a riled-up, recalcitrant workforce – have brought it on themselves. For too long they have indulged their workers, and now they have a woke Frankenstein’s monster on their hands.

No one should object to the idea we should always be kind, compassionate and do our best to open up job opportunities to people from every background and ability.

But by lumping this in with their woke laundry list of the perceived injustices associated with the unthinkable burden of being required to show up for work, the juvenile virtue-signalling shop stewards of the Apple ‘resistance’ unwittingly reveal how selfish, shallow and hypocritical they are… as well as giving us a horrifying glimpse into a grim, joyless future dominated by woke corporations in thrall to a handful of humourless Left-wing martinets.

If they really wanted to help the ‘neurodiverse’, shouldn’t these Apple workers be demanding a return to work as soon as possible, if only to end the social isolation of working from home that can be especially damaging to people with the exact ‘differences’ they claim to care about?

Elsewhere in their whingeing manifesto, they argue that permanent work from home is good because it helps preserve ‘phy­sical resources’ by cutting down on commuting.

A dispassionate observer might say: it’s a bit rich for anyone at Apple to be talking about protecting physical resources when its most popular product, the iPhone, is produced through strip-mining the world for rare minerals and destroying natural habitats on multiple continents.

Not to mention the huge energy consumption associated with the internet usage that Apple products enable and encourage.

As for their demand to be free to decide how and where to work, and for that not to be determined by ‘privilege’, we might take that a little more seriously if they showed even a passing interest in the rights of the workers who make Apple products, given the credible allegations of slave labour in Apple’s supply chain – in particular from Uighur concentration camps run by China’s brutal authoritarian regime.

The real ‘privilege’, of course, belongs to the whining Apple employees themselves, who have become the most visible symbol of an ugly phenomenon: a new generation of entitled, coddled and cosseted workers who think their sanctimonious world view is more important than doing the job they’re paid for. (Very highly paid, in many cases.)

Their total lack of self-awareness is staggering. The fact that being asked to come into the office three days a week is considered a beyond-the pale draconian imposition shows how out of touch they are from a work ethic that until recently was central to human existence, and which is still the reality for most people who do not have the luxury of just saying ‘no’ when their boss asks them to show up.

This is the consequence of an elitist culture – in our education system, in families and elsewhere – that for too long has told young people they can do no wrong, abandoning the discipline and structure essential to producing well-rounded, res­ponsible citizens.

Instead, we have spoiled-brat social-justice warriors taking over some of the most influential companies on the planet.

Worse still, instead of standing up to this kind of nonsense, too many business leaders go along with it in the hope of a quiet life.

That’s why we’ve seen such an explosion of woke activism from so many major companies in the past few years.

Of course firms should live up to their social responsibilities: treat their workers well, do their best to protect the environment, be respectful of the communities where they operate.

But that is not what we are witnessing, with big business taking on a partisan role in our most contentious debates, lecturing us on everything from ‘climate’ to inequality to, of course, racism – while very often doing the bare minimum, if anything, to advance those goals in their own organisations.

All this corporate preaching and finger-wagging, consistently aligned with the latest establishment groupthink, may satisfy the insatiable desire for virtue signalling self-expression found among the small proportion of the population obsessed with politics and activist causes.

But for most people – whether as consumers, workers or citizens – it is more and more tiresome and off-putting.

‘Can’t they just let us do the shopping without shoving all this woke politics down our throats?’ is an increasingly common refrain.

Sadly, it’s hard to see how this trend will be reversed, at least in the near future, because so much of it is driven by this new generation of activist employees, especially in elite and culturally dominant sectors like Big Tech. So Apple’s Tim Cook – and all the business leaders struggling to face down the demands of a riled-up, recalcitrant workforce – have brought it on themselves.

For too long they have indulged their workers, and now they have a woke Frankenstein’s monster on their hands.

Apple has told its employees to be back in the office three days a week by September 5.

By then, Liz Truss should be Prime Minister.

Compared with taming Apple’s woke workforce, her task to get the Civil Service back in the office should be a breeze.