I’ve got nothing against nostalgia. In fact, I’m of an age and a generation – almost 60, Gen X – that thrives on the stuff.

I worship at the altar of David Bowie, Lou Reed, the Beatles and the rest of them. I go deep with every release of the Dylan Bootleg Series, and readily admit to shedding a tear when Charlie Watts recently drummed his last. I write books that obsess over what I consider to be the golden era of Oz music. So, like much of the Western world, I had a passing interest in the re-emergence of pop titans Abba almost 40 years after what we all assumed to be their Waterloo. 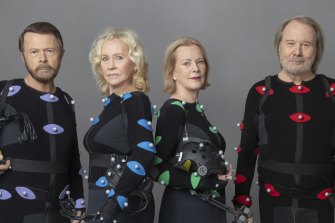 ABBA’s decision to virtually reform will stir nostalgic memories but may also poison their legacy.Credit:Baillie Walsh

While they might not necessarily be high on my personal playlist, they are, after all, the super Swedes that produced Fernando, Mamma Mia, SOS to name but a few. (My favourite, incidentally, is The Winner Takes it All, poignantly picked apart by Steve Coogan in The Trip. “I find the song quite moving,” he admits, almost tearing up. I feel for you, Steve.) They’re musical maestros, with more than 30 charting singles in Australia alone.

So, understandably, there’s been mad interest in their new release, I Still Have Faith in You. But has anyone listened closely to the song? It hurts me to say it — I wanted it to be great — but it’d be a stretch of Olympian proportions to rank it among their best. The performances are fine, the production is top shelf (it sounds like Abba) but it’s a song in search of something resembling a great melody or a timeless hook. As for Don’t Shut Me Down, their other new release, why do I keep humming Herman’s Hermits’ My Sentimental Friend? Weird.

Comebacks of this type have a dodgy track record. The Beatles’ Free As A Bird sounded a lot like what it was: a sketch of a song that John Lennon had discarded on the floor of his Dakota apartment. Elvis’ A Little Less Conversation was essentially a mediocre mid-career track given a dance makeover by an obscure Dutch outfit named Junkie XL. And despite their very best intentions, everything INXS did post-Michael Hutchence carried the faint whiff of desperation. And don’t get me started on the “new” version of Queen. Freddie Mercury would not be amused.

None of this, of course, will stop I Still Have Faith in You, and the subsequent album and live shows, from doing bumper business. More power to them. But still it leaves me wondering why Abba opted to tinker with their legacy. Weren’t the memories of their golden era enough? Mind you, those Abba avatars do look kind of cool.