It’s been a big week for kids from Sydney public housing. 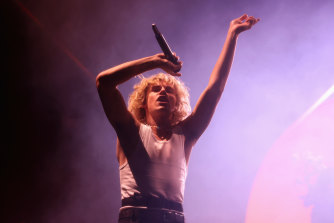 The Kid Laroi performs at Qudos Bank Arena on May 26.Credit:Cameron Spencer/Getty Images

On Monday, one was sworn in as prime minister. Then last night The Kid Laroi, the 18 year-old otherwise known as Charlton Howard from Waterloo’s Drysdale block, proved himself a prime mover of pop in a homecoming show that was as tear-jerking as it was triumphal.

Befitting the world’s most popular purveyor of so-called “emo rap”, a few of those tears were shed by Laroi himself, hard as they were to see amid the sweat pouring off him and the bass drops hammering everybody’s skulls.

Sure he has 3 billion streams and a couple of US Top 10 singles to be happy about. But as the land council chief who introduced Laroi reminded us, this was National Sorry Day, and The Kid’s great-great-grandfather was a member of the Stolen Generation.

Selling out this stadium for two nights had also clearly overwhelmed Laroi. He told us that only three years ago, he thought he’d made it when 150 people came to see him play a room on Crown Street.

An emotional victory lap this show certainly was, but Laroi also made sure it was a party.

Most of his songs use a “trap” beat that is the product of laptops, so to entertain us for 90 minutes he had little more than a deejay-cum-hype-man, a set with a couple of staircases and some incongruous floral arrangements, and himself. 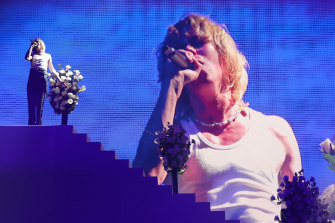 This was mostly enough. Sure, there were no musical surprises if you already knew the songs, and judging by the volume of the singalongs, that was everybody here.

But The Kid had charisma in spades, with a knack for turning lyrics that are as self-obsessed as any teen into crowd-pleasing pop gems. The melodic and nihilistic influences of late mentor JUICE Wrld were obvious, but Laroi showed he could really sing too, giving us gut-wrenching takes on Lonely And Fucked Up and Without You.

It’s a shame Laroi didn’t take a chance with some freestyle rap, which he used to be known for around Waterloo, but his commitment at this show was otherwise total.

He even agreed to the moshpit’s demand that he skol a beer from one of the dress shoes he’d just bought in LA. The global phenomenon’s heart is still here.