Victoria’s budget for big transport projects has blown out by almost $4 billion in just two years, with the Andrews government defending the rapid jump in construction costs as comparable with the rest of the world.

Upgrades to the state’s rail network, commuter car parks and a program to build new trains face multimillion-dollar blowouts as the government forges ahead with its $80 billion transport “Big Build”. 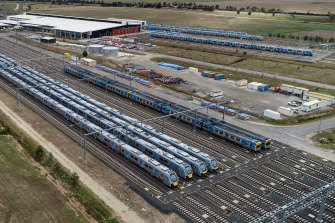 And on top of the blowouts, a quarter of its projects worth more than $100 million are not being built within their expected deadline.

The government had already revealed its Metro Tunnel had to be bailed out, handing $1.37 billion more to the private consortium building the rail project.

Within the last 24 months the government has added $3.8 billion in spending on rail and road construction.

Treasurer Tim Pallas said the blowout – averaging $5 million a day more than the government intended to spend – was something being replicated across Australia. 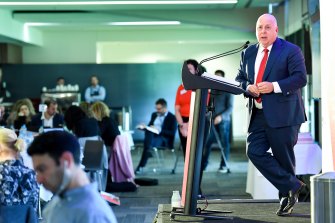 The government said the pandemic in 2020 had also “created some uncertainty” and linked this to the cost blowouts.

The budget papers revealed bidders in the most expensive road project in Victorian history, the $15.8 billion North East Link, have had to be reassured they will not carry all the risk of building the complex tunnel under the Yarra and a massive widening of the Eastern Freeway.

Bids to build the road were received a year ago, but the process was reset during the pandemic. Almost $350 million already spent on the toll road has been rebranded “operational” spending rather than as construction costs.

The troubled $2.3 billion High-Capacity Metro Trains program faces a $67 million cost overrun and spiralling delays. Just seven of the 65 new trains from China are now in service; the original schedule planned to have at least 37 on the rails by August this year.

The cost of several regional rail upgrades have also surged, by about $330 million, while duplication of the Cranbourne rail line blew out by $15 million. The cost of building 11,000 new and upgraded station car parks also jumped by $263 million.

The government has also significantly eaten into its budget to remove 75 level crossings.

With boom gates removed at 46 locations on the city’s rail lines – or 60 per cent of the planned program – the government has chewed through 72 per cent of its budget.

So far, it has spent $9.6 billion of its $13.3 billion budget. A further 16 level crossings are being removed under the program which is running ahead of schedule.

The government has spent less than forecast on the West Gate Tunnel tollway in the city’s west. It is facing at least a two-year delay due to an impasse over where to dump 3 million tonnes of contaminated soil.

Originally planned to be finished next year, Transurban – the government’s partner in the project – now says it won’t open until at least 2024.

Mr Pallas confirmed on Thursday no further funds had been allocated to the project, suggesting the government does not expect to cough up any extra money to cover the blowout on the project.

The road was originally costed at $5.5 billion, jumped to $6.7 billion, but is now predicted to cost even more – potentially more than another $3 billion.

“We have a contract, it’s a fixed-price contract, and we’d expect that the contractors Transurban and their joint venture partner honour the terms of that contract.“

To see how its cost blowouts compared with the rest of the world, the government commissioned its Office of Projects Victoria to compare its over-budget projects with equivalents overseas.