The fire is still burning bright for these two: Arcade Fire’s new album We is a riveting return to arena rock and bursting with art and soul

For a pop star, being in a band with your spouse is usually a recipe for divorce. Just look at John and Christine McVie of Fleetwood Mac, or all four members of Abba.

But there is one exception to the rule. Win Butler and Régine Chassagne, the singers with Arcade Fire, have been married since 2003.

On their new album, the fact that they live together made all the difference. The pandemic left some artists collaborating with beginners: Taylor Swift co-wrote five songs with her boyfriend Joe Alwyn, who is an actor. 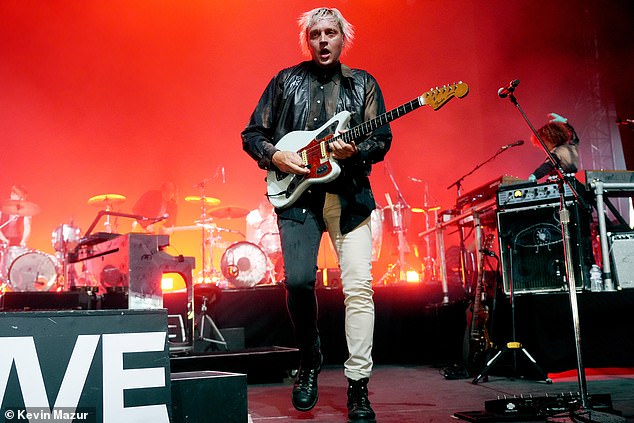 On their new album, the fact that Win Butler (above) and Régine Chassagne live together made all the difference

Butler and Chassagne, stuck at home in New Orleans with their young son, each had a seasoned songwriter to bounce off. When lockdown stopped their sixth album in its tracks, they went back to the drawing board.

‘It was the longest we’ve spent writing uninterrupted,’ Butler says, ‘probably ever.’

The results are riveting. We contains only seven songs, but each one is an event. Some have chapters; all but one have Roman numerals after their name, like the kings and queens of England.

Never mind the state-of-the-nation novel, this is a state-of-the-species record. The first half, pondering our troubles, is subtitled ‘I’; the second, searching for hope, is ‘We’.

On the curtain-raiser, Age Of Anxiety I, Butler and Chassagne capture the zeitgeist. By track three, End Of The Empire I-IV, they’re discussing the decline and fall of the USA.

It could all be too much, but the music is a match for the subject matter. After diving into the disco with Everything Now, Arcade Fire return to their own brand of arena rock, bursting with art and soul.

They play so intensely that you wonder if they’re managed by Jurgen Klopp.

With End Of The Empire, Butler and Chassagne have written an epic ballad, clearly descended from Hey Jude and Radiohead’s No Surprises (with which it shares a producer, Nigel Godrich).

But there’s intimacy too, on a tender love song addressed to their son.

In their early days, Arcade Fire were championed by David Bowie. Now they’ve turned to Terry Pastor, who hand-tinted the sleeves of Hunky Dory and Ziggy Stardust, to do the same for We.

It might be a rash move if they hadn’t made a classic album.