Which burger is the REAL big cheese? After 20 years Wendy’s is back in Britain… and now the High St choice is wider than ever. Here, meat-lovers put the nation’s favourites to the test

Shoppers watching ravenous hordes standing in hour-long queues this week must have wondered what on earth they were waiting for. The latest Apple gadget, perhaps, or some limited edition trainers worth hundreds of pounds?

In fact, the treat tempting customers to stand in line was a £4.59 burger. This summer, after a 20-year hiatus, fast-food chain Wendy’s returned to the UK, with a store opening in the Stratford Centre in East London, and another in Reading.

It comes after Wendy’s dethroned Burger King to become America’s second most popular burger chain. And if the resulting queues are anything to go by it seems that — despite warnings about the disastrous impact on our health, and that of the planet — Britain has never been hungrier for burgers.

Chains are keen to cash in, with dedicated burger joints on our High Street ranging from £3.39 at McDonald’s to £12.95 at Gourmet Burger Kitchen. But with many of us secretly admitting we prefer a ‘cheap’ burger to deluxe offerings, what really is the difference? We test the signature offerings from the biggest brands to see who wins the battle of the burgers… 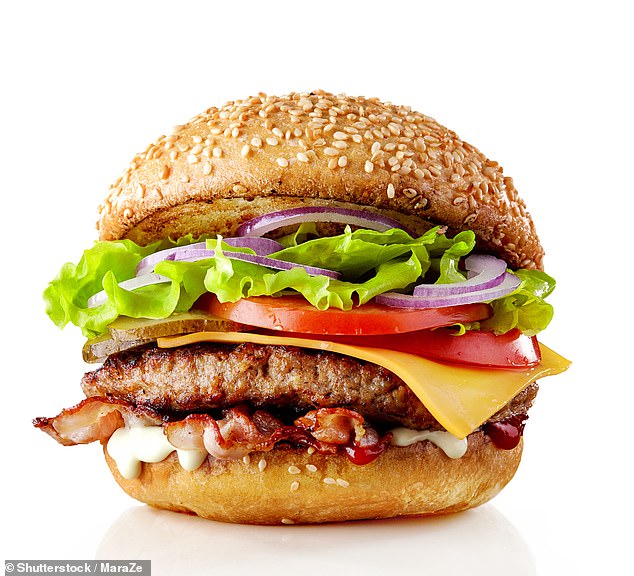 Chains are keen to cash in, with dedicated burger joints on our High Street ranging from £3.39 at McDonald’s to £12.95 at Gourmet Burger Kitchen. But with many of us secretly admitting we prefer a ‘cheap’ burger to deluxe offerings, what really is the difference? (file image)

The biggest player by far in the burger market, McDonald’s first arrived in the UK more than 40 years ago and prides itself on serving up burgers that are consistently the same across all of its 1,300 outlets. 2.4 million Big Macs are sold around the world every day.

TASTE TEST: The first thing that hits you when you buy a Big Mac is how homogenised it is — if you buy two Big Macs they’ll be the same cookie-cutter width and height. When I bite into it, my next impression is how sweet it tastes — from the bun to the condiments. But the chopped onions, sauce and pickles are well-judged and because it’s all wrapped up in a neat package, the Big Mac was less messy than most burgers to eat.

ENVIRONMENTAL COST? McDonald’s claims that ‘all McDonald’s burgers are made using 100 per cent British and Irish beef, sourced from over 20,000 farms’. The company did not respond to questions about the welfare conditions or what cattle were fed on. When I asked a server where their beef came from she replied: ‘Cows.’ 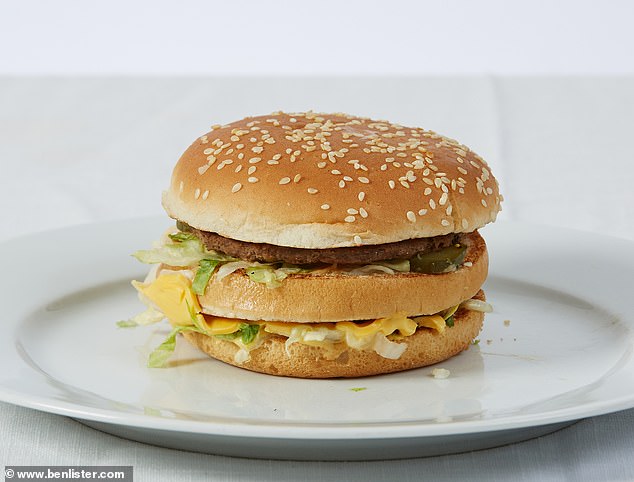 Burger King arrived in the UK in 1974, the same year as McDonald’s, and aimed to offer a higher quality burger with the Whopper. Though it now boasts 500 branches, it never grew on the same scale as its rival.

TASTE TEST: Nearly three times as wide as it is high, this is a flatter burger you can hold in one hand rather than needing two hands and a large mouth. Like the Big Mac, it’s the mayonnaise and tomato flavours that hit you first. The beef is well done, but the synthetic sugary flavour lingered.

ENVIRONMENTAL COST? Asked about how their beef is raised, the company says: ‘We continuously review our policies on animal welfare, sourcing and environmental impact to ensure we remain good corporate citizens in the communities we serve.’ 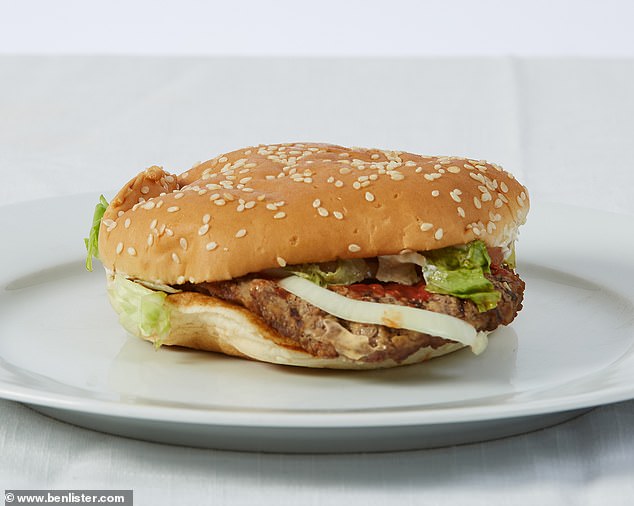 Founded in Virginia by a dad and his four sons in 1986, Five Guys entered the ‘better burger’ market in the UK in 2013. Britons loved its retro feel, and it now has 120 stores throughout the UK

TASTE TEST: Five Guys is a basic burger built around high quality meat that you can garnish with up to 15 different toppings. The meat tastes high quality and, at £6.95, it’s a good compromise between price and quality.

ENVIRONMENTAL COST? Five Guys says the beef is grain fed and left to mature for 120 days. According to CEO John Eckbert: ‘This creates a critical difference in the quality of the meat. Less than 1 per cent of UK meat would qualify for Five Guys meat.’ 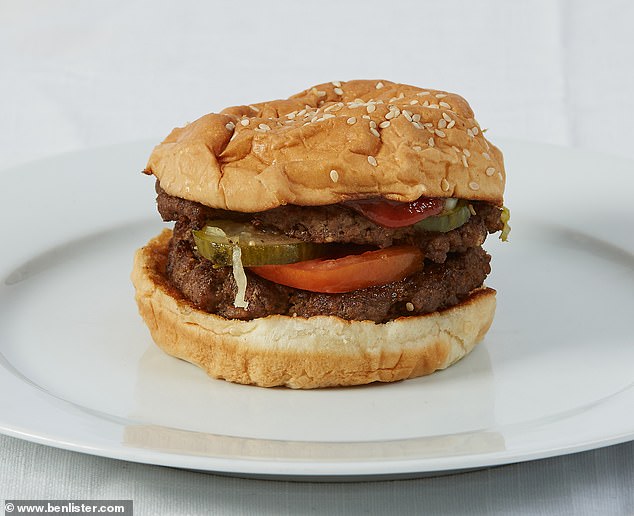 Back after 20 years is the burger chain with square patties, made so ‘because we don’t cut corners’. It has plans for 400 in total throughout the UK

TASTE TEST: I was astonished to see a queue which took an hour to go down. So expectations were undoubtedly high when I opened up the tissue paper. I wondered why it was slathered in pink sauce. But on the first bite, I was impressed. The burgers are juicy and the textured meat works well with whatever the pink stuff is, though it’s hugely high in calories. Overall, the flavour of a gourmet burger at around the price of Big Mac or Whopper.

ENVIRONMENTAL COST? Wendy’s says its beef is ‘British’ and supplied, like all its ingredients, by food distributor Brakes. 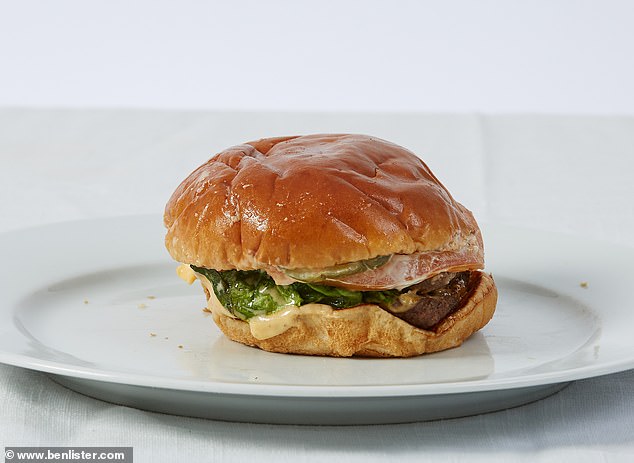 GBK was the first to bring the concept of gourmet burger to Britain in 2001.

TASTE TEST: Its very large height means I feel like I could dislocate my jaw when taking the first bite. It is delicious to eat, piping hot after being cooked at 71c, nicely charred and piled high with rashers of bacon. As I take my first bite all the juices come cascading down the side. A massive indulgence but at £12.95, it’s got to be worth it — and it is. No wonder it carries such a heavy calorie punch.

ENVIRONMENTAL COST? All of GBK’s supplies come from Bidfood, which has signed up to the WRAP Courtauld Commitment 2020 that aims to reduce the resources needed to provide food and drink in the UK by 20 per cent by 2025. 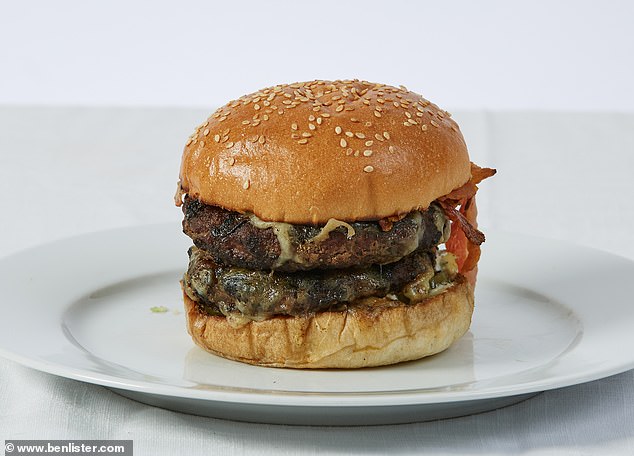 In true British style, university friends Phil Eeles and Tom Barton started up Honest Burger by opening stands at festivals, before starting their first restaurant in Brixton in 2011. It now has 46 sites in the UK, including four kitchens for delivery orders.

TASTE TEST: With a 2cm thick patty this is all about the meat, simply topped with melted mature cheddar and onion jam. Delicious. The meat tastes high quality. The company uses suppliers in Scotland and some very English touches, like the cheese and onion jam, combine to create a great burger package.

ENVIRONMENTAL COST? A spokesman said: ‘Honest Beef is from small farms in the Highlands. The cows are native breeds, live outside and eat grass.’ 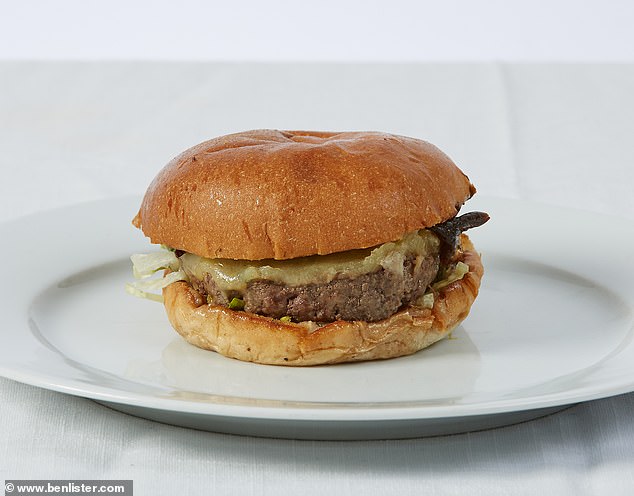 Founded in 2007, Byron’s helped create the ‘better burger market’ and became known for its cool industrial chic venues, craft beer, milkshakes and claim to serve ‘proper burgers’. However, it hit hard times in lockdown and went into administration. Even though it was saved, 31 of Byron’s 51 sites were closed.

TASTE TEST: The chain boasts its burgers are cooked the Byron Way — that’s pink and juicy. To get this the 6oz patties are cooked at 68c for eight minutes, turning once. It’s piled high with American cheese, bacon, lettuce, tomato, red onion and pickles. Just watch out for the juices running onto your shirt — ask for extra napkins.

ENVIRONMENTAL COST? The company says it ‘uses a premium, pure Aberdeen Angus blend of flank, chuck, brisket and short rib from a butcher in Yorkshire’. It uses Dovecote Park, which also supplies beef to Waitrose. 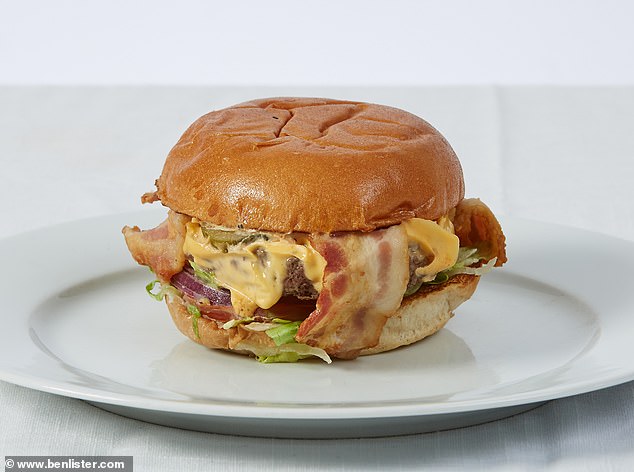