Did the ‘Prince of Soho’ kill himself to escape drug debts? It’s the intriguing question asked by new podcast on the life and death of flamboyant Groucho Club host who was found hanged after ‘owing £30,000 to an Albanian gang’

The hedonistic life and tragic demise of the vibrant club host dubbed ‘the Prince of Soho’ is explored in a fascinating new podcast series.

Bernie: Who Killed The Prince of Soho? recalls the highs and lows of Bernie Katz, the longtime front-of-house host of the Groucho Club, a Soho private members’ haunt which has seen everyone from Princess Diana to Bill Clinton walk through the doors.

Known as ‘the little man that can’, Katz, who stood just 5ft tall, was a ‘fixer without equal’, a ‘keeper of secrets’, and a confidant of stars including Stephen Fry, Kate Moss and Jude Law, who gave the eulogy at Katz’s funeral.

But his glittering life came to a tragic end in 2017. First, Katz left his post at the Groucho after 27 years in circumstances that remain unclear. Five months later he was found hanged at his rented flat in north London at the age of 49.

Although family and friends accept Bernie was in a ‘dark place’ at the time of his death, journalist Mark Edmonds questions whether his suicide might have been an ‘indirect’ connection to drugs.

At the time there were rumours he was in serious debt to the tune of £30,000 and was being ‘chased’ by Albanian gangsters. 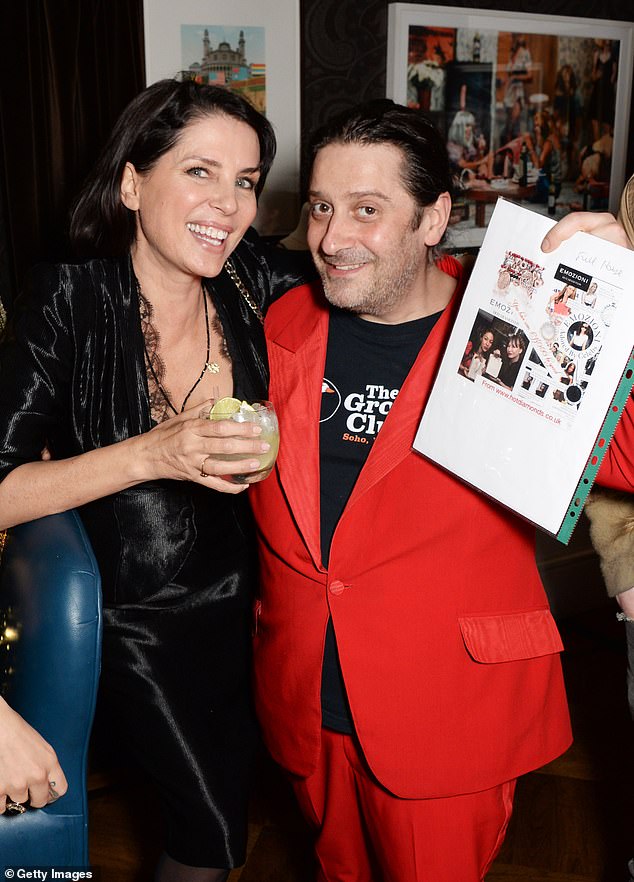 Friend to the stars: Bernie: Who Killed The Prince of Soho? recalls the highs and lows of Bernie Katz, pictured with Sadie Frost, the longtime front-of-house host of the Groucho Club, a Soho private members’ haunt which has hosted everyone from Princess Diana to Bill Clinton

In the new three-part series, Edmonds speaks to some of those who knew Katz best as he attempts to answer the question: ‘Did Bernie die by his own hand, or was there someone else involved?’

Born in south London in 1968, Katz was the son of the notorious gangster and club owner Brian ‘Little Legs’ Clifford who was described by his son as ‘a real villain with a heavy clout around south London’.

One friend describes father and son as having a ‘toxic’ relationship.

When Katz was 15 he witnessed his father being shot dead by masked gunmen at the family’s London home.

‘So used was I to a life of drive-by shootings I thought nothing of the sound of that gunshot, except that it intruded upon my viewing of the Price Is Right,’ Katz recalled in his 2008 memoir, the Soho Society.

‘When I went to investigate I discovered that thanks to the bullet through his head, my Dad’s brains were scattered across the four walls of his bedroom.

‘Never one to miss an opportunity, I sashayed over to his wardrobe and navigated my way across the sea of the footwear to his black Pierre Cardain alligator skin shoes, which I had secretly always had my eye on. Thank God they were in the wardrobe.’

Following the death of Clifford Katz’s mother, who he once described as an ‘archetypal Jewish mother’, relied heavily on her son.

Friends described Katz as the ‘patriarch’ of the family who looked out for and partly financially supported his mother, sister and an autistic cousin. 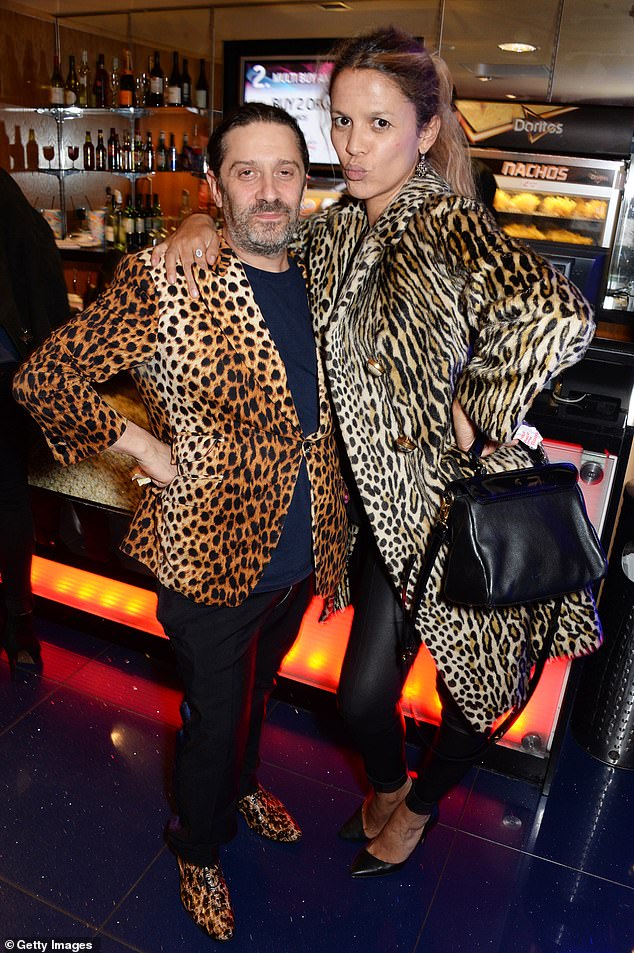 Bernie’s glittering life came to a tragic end in 2017. First, Katz left his post at the Groucho after 27 years in circumstances that remain unclear. Five months later he was found hanged at his rented flat in north London at the age of 49. Pictured, with Lisa Moorish in 2014

After waiting at a few Soho haunts, Katz joined the Goucho as a barman in 1990. He was later promoted to front-of-house manager.

At the time the Groucho had reached its fashionable, cocaine-fuelled ­zenith: the upstairs snooker room was widely known as the ‘Peruvian ­Procurement Department’, according to Edmonds.

Founded in 1985, the club used to be frequented by writers such as Julie Burchill and Toby Young.

More recently it has hosted everyone from Miley Cyrus to Kristen Stewart.

However members have previously complained it has lost its ‘unique feel’ that made it the go-to destination for celebs.

In 2016, 14 members wrote a letter to the manager claiming it was being flooded with City types.

‘The club appears to be over-subscribed, and new members don’t seem to necessarily come from the traditional media/arts background,’ they say.

‘When the club membership becomes over-subscribed or too corporate, it smacks of the club needing money.’

The club, a precursor to the likes of Soho House, which is just down the road, has bars, two restuarants, private event rooms and 20 bedrooms.

The Groucho Club has a zero-tolerance drug policy and was never a willing party to drug use or supply.

Katz orchestrated hell-raising nights for Kate Moss and once deposited boozy writer Jeffrey Bernard back home in a wheelchair. A-listers praised his discretion and all members appreciated the way he made everyone feel important.

‘It’s not our job to say no,’ Bernie once said in an interview. ‘You always start with a positive. Our job is “yes”, you can have whatever you want.’

The podcast is packed with testimony from members, celebrities and otherwise, who remember Katz for his kindness, thoughtfulness and ability to make them feel like they had a personal connection.

Actress Alison Steadman, best known for Gavin and Stacey, says on the podcast: ‘Bernie Katz was to me he was the Groucho club and the Groucho is not the same without him… Bernie was fun, he was kind, when he walked in, the room just lit up.

‘I once helped him, in a small way, with a charity connected to his nephew [who was autistic]. I didn’t do much, but Bernie never forgot it. He knew my favourite tipple and would always make sure several glasses always appeared.’

Among the high profile members he befriended were Tracey Emin and Damien Hirst.

In return for ‘favours’, Bernie had been given art worth ‘well in excess of six figures’, according to Edmonds, Groucho Club members, although none of this money reportedly remained at the time of Katz’s death.

Katz’s time at the Groucho came to an end in March 2017. His retirement party was attended by well-wishers including Neil Morrissey and Tamzin Outhwaite and food critic Tom Parker Bowles.

In the months that followed, the flamboyant front-of-house manager slipped into a downward spiral.

Katz picked up some shifts at The Union Club, also in Soho, but this left him with ‘not much in the way of cachet and very little in the way of cash’ and marked the end of his glory years. 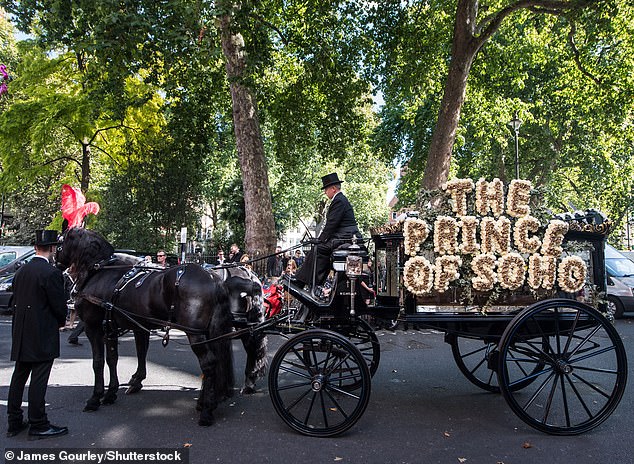 Bernie’s funeral saw hundreds of mourners, including Sienna Miller, Sadie Frost and Noel Fielding, gather in the streets of Soho to pay tribute to Katz. Pictured, the funeral carriage

‘Bernie’s tragedy was that after he left the Groucho, with no regular job, he had begun to succumb to the addictions that had dogged him throughout his life,’ Edmonds explains.

But by the time of his death, Katz was in ‘serious debt’ – at one point in the podcast the figure of £30,000 is thrown out – and a rumour about a connection with ‘Albanian or Eastern European’ cocaine dealers circled.

‘He soon found himself with money troubles and he ended up taking small loans from friends. And then, from what I’ve been told, things got much worse,’ Edmonds continues. 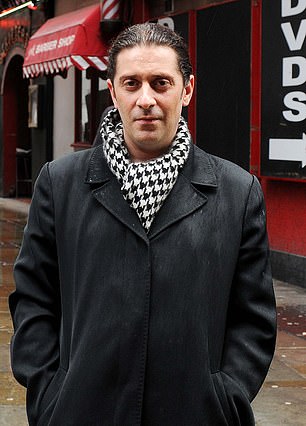 Known as ‘the little man that can’, Katz, who stood just 5ft tall, was a ‘fixer without equal’, a ‘keeper of secrets’, and a confidant of stars including Stephen Fry, Kate Moss and Jude Law, who gave the eulogy at Katz’s funeral

‘Put bluntly, he got on the wrong side of the wrong kind of people. Specifically, it was whispered, Albanian gangsters, and their constant demands for repayments.’

Bernie’s body was discovered on August 31, 2017, at his modest rental flat in Kentish Town, north London. He was found hanged and the coroner recorded an open verdict.

The funeral saw hundreds of mourners, including Sienna Miller, Sadie Frost and Noel Fielding, gather in the streets of Soho to pay tribute to Katz.

‘The traffic-blocking turnout at his funeral procession attested to the many people who counted Bernie as a friend,’ Edmonds says. ‘Yet very few of those friends were aware of the pressure he was under.’

There was no suggestion drugs played a part in his death but Edmonds questions whether there was an ‘indirect’ connection.

‘I spoke to a number of his friends and Groucho members who said in the last few months of his life, Bernie had been frightened, very frightened,’ Edmonds says.

One friend recalls: ‘He had a lot of debt, and that debt was related to buying cocaine, which there were rumours it was an Eastern European gang. That was being spoken about a lot… [It would be] 30 grand to the Albanians, or whatever it was.’

In the final episode of the series, which will be released next week, Edmonds will delve more deeply into what exactly happened to Katz in the months leading up to his death.

Bernie: Who Killed The Prince of Soho? is available now on Apple, Spotify, Acast and all podcast providers.