A woman with a horrific genetic condition that causes her skin to blister and develop oozing sores is proudly showing off her scars in a series of sexy photos to prove that she won’t let it stop her from embracing her natural beauty.

Influencer Fernanda Tanajura, who is from Livramento de Nossa Senhora, Brazil, was born with a rare condition called epidermolysis bullosa (EB). This genetic disease is caused by an irregularity in the skin’s collagen causing the skin to become thin and sensitive, and means that any friction against the skin can cause blisters and sores.

Having lived with the condition her entire life, it’s something Fernanda is used to dealing with.

As a child, she was unable to play in many outdoor areas as trees and shrubs could rub against her skin but Fernanda was never treated differently by other children – so much so that she never saw herself as different. 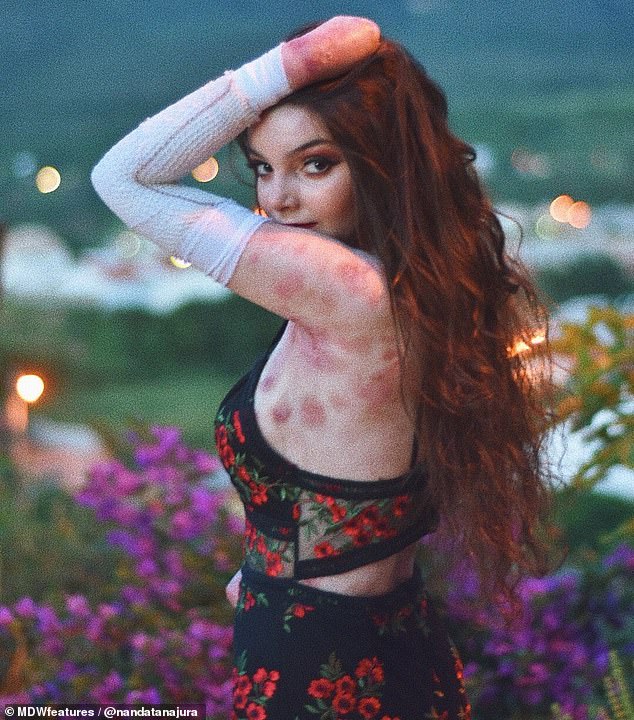 Proud: A Brazilian woman who was born with a rare condition that causes blisters and sores to form on her skin is proudly showing off her scars in sexy photos 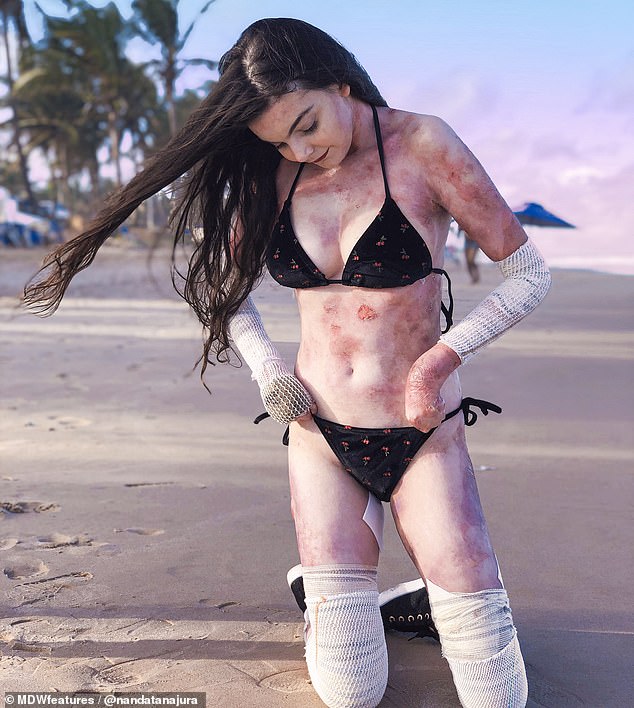 Overcoming obstacles: Influencer Fernanda Tanajura, who is in her twenties, was born with a rare condition called epidermolysis bullosa, which makes the skin thin and sensitive to friction 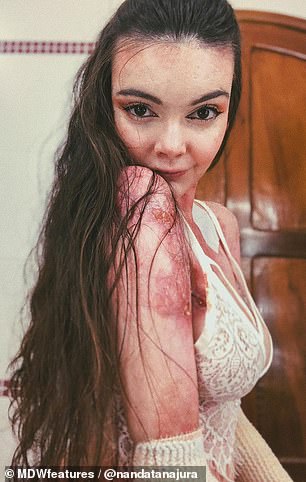 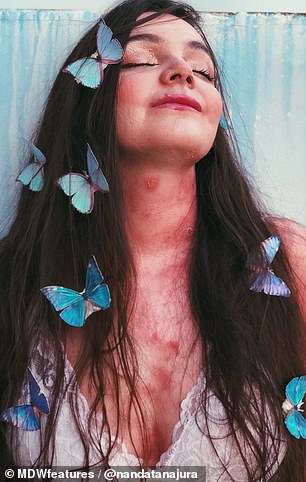 Struggle: As a result of her EB, Frenanda is left covered in blisters and sores that result from even the tiniest amount of friction on her skin

To control her condition, Fernanda has to maintain a strict skincare regime which consists of using sunflower oil and body cream every day to moisturize her skin. She also must dress any sores with bandages changing them every day. 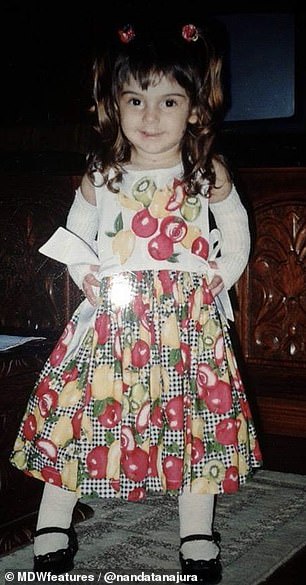 Throwback: Fernanda was diagnosed with the condition as a child and she has had to wear bandages on her skin ever since to try and protect it

Fernanda’s hands are the worst affected area as the skin here encounters the most friction. This trauma and lack of movement has caused muscle atrophy which means the muscle in Fernanda’s hands is wasting away.

Despite this, Fernanda is not one to be held back and can live independently regardless of her limited movement.

She was particularly proud to figure out how to apply makeup despite her condition.

Although the condition is not as painful as many might think, Fernanda regularly bandages her hands to protect the skin from further damage. She very rarely experiences noticeable pain.

Fernanda has always been well loved and supported by her family and friends yet she’s also found an online following. Fernanda began posting to social media just like any other teenager but she soon became a voice for those with epidermolysis bullosa.

Although it happens rarely, Fernanda has encountered some online trolls who have criticized her appearance, however the majority of her followers have praised her confidence and it’s these people who motivate the influencer.

She hopes to continue bringing a voice to those with epidermolysis bullosa who are so often underrepresented and unacknowledged.

‘I’ve had EB ever since I was born,’ Fernanda said. ‘It’s considered to be rare and it has a huge impact on my health and daily routine.

‘I have to maintain a daily skincare routine, change my dressings, and sometimes I require medical monitoring if my condition gets worse.

‘Despite this, I wasn’t aware I was different when I was a child. My friends all treated me normally.

‘I had some restrictions. I couldn’t venture into forests or similar outdoor spaces as the vegetation could hurt me but that was insignificant for me at that age. I had a very happy childhood.

‘I have developed atrophy in my hands but incredibly, I’ve learnt to adapt and can pretty much do everything normally – including my own makeup.

‘EB isn’t as painful as people think. It rarely causes me pain unless I have a severe injury. In my daily life, I live fairly normally.

‘Even now, all of my friends and family support me. My condition has never held me back from connecting with people.

‘I’m single at the moment but my EB has never affected any of the relationships I’ve had. People see past it.’ 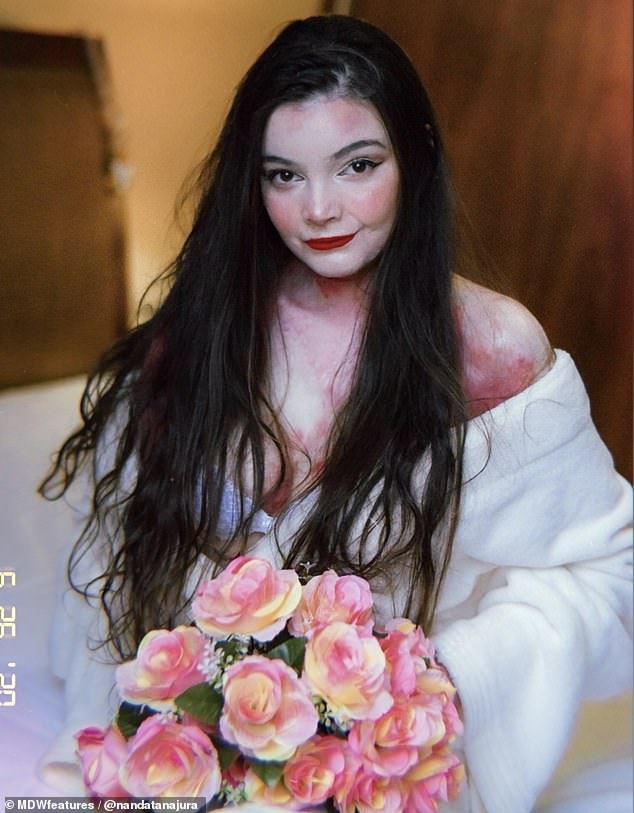 Blooming love: She says that her condition has never affected any of her relationships, explaining that most people are able to ‘see past’ her EB 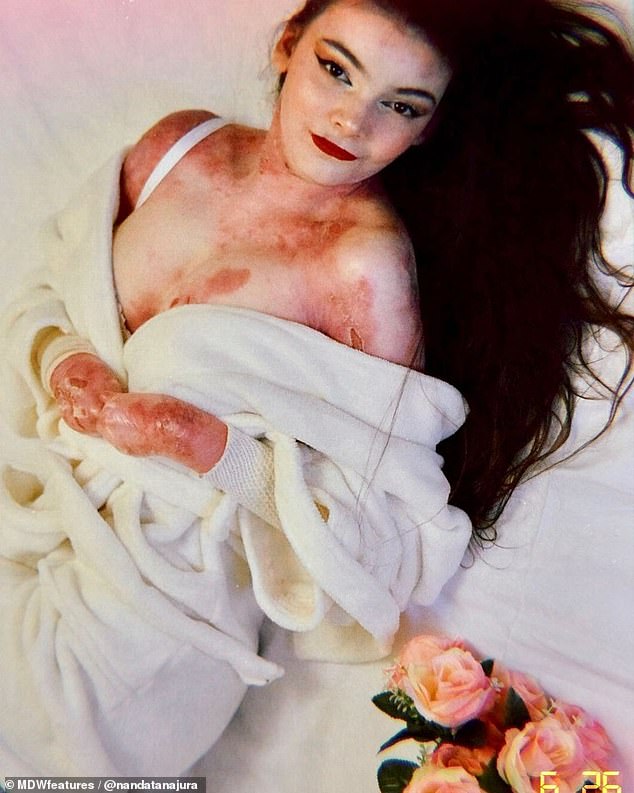 Brave: Fernanda admits that she receives some negative comments on her social media posts but insists that she won’t let trolls stop her from feeling confident 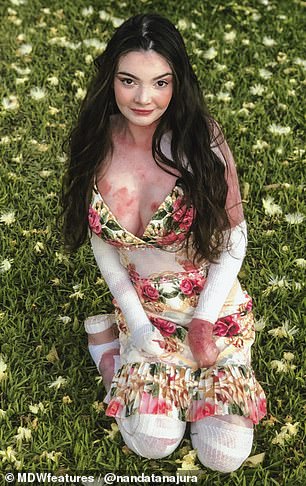 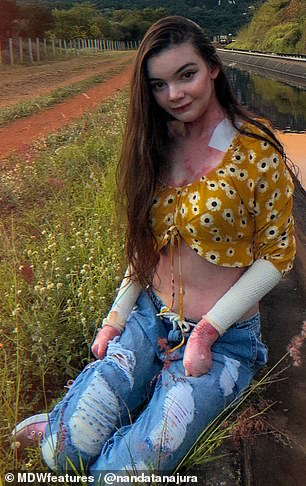 Praise: ‘I receive so many comments on my positivity and people are complimentary of my appearance,’ she said

Fernanda began posting photos of herself to Instagram in 2014.

‘I’m passionate about photography and I’ve never worried what others think so posting to Instagram was very natural to me,’ she said.

‘I receive so many comments on my positivity and people are complimentary of my appearance.

‘It’s made me feel very welcomed. Very rarely are people negative although I’ve had a few verbal attacks criticizing my appearance or pitying me.

‘I don’t need pity and I don’t want to please everyone but respect is essential.

‘I want to give a voice to more people like me – to increase representation and bring something positive to people’s lives.

‘I’d love to maybe model professionally one day. It’s a big dream for me and I think it would be great for EB representation.

‘Living with EB isn’t always easy but the sum of the positive experiences I have had motivates me and makes me believe that I have a bigger purpose.’