Jim Calhoun knows a thing or two about building something out of nothing, and it turns out that Steve Pikiell, now the Rutgers coach, was paying close attention all those years ago.

In conference games, his Huskies typically dominated the perpetually struggling Scarlet Knights, but the trips to Piscataway, N.J., led Calhoun to believe Rutgers could build a powerhouse if it wanted.

He would share this notion with Pikiell, a point guard who was with him from the beginning of his UConn tenure. When Pikiell first slipped on a UConn jersey in the mid-1980s, he was asked in airports if he played for a team in Fort Yukon, Alaska. No one had heard of the university in the sticks of Storrs, Conn., and people were confused by the wolfish Husky mascot.

But Calhoun knew he had something to pitch to players.

“We went out and we sold the Big East — and eventually, we sold UConn,” Calhoun said by phone this week. “But initially, the Big East was magical, and I think right now the Big Ten is. You watch Illinois play, Michigan playing, et cetera, et cetera, you’re watching arguably the best conference in the country.”

He added, referring to Pikiell: “All those venues — it isn’t a game. It’s an event at those places. It’s tradition rich. He’s using the Big Ten like we used the Big East.”

Sell the conference, sell the team.

When interviewing with Rutgers’s athletic director, Pat Hobbs, five years ago, Pikiell said he would walk the New Jersey Turnpike from his coaching job at Stony Brook on Long Island if it meant he could lead Rutgers, which hadn’t reached the N.C.A.A. tournament since 1991. 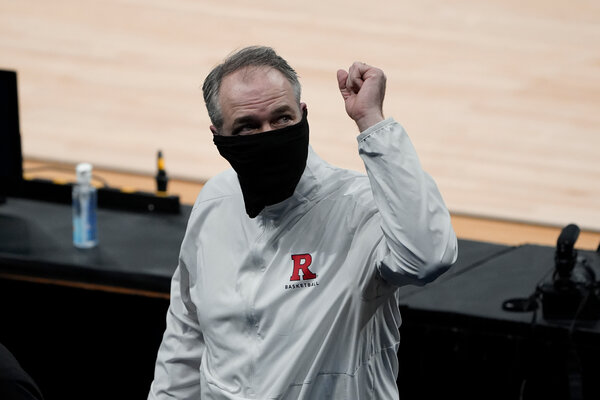 He wasn’t deterred by Rutgers’s reputation as a program that chewed up and spit out coaches.

Kevin Bannon nearly led Rutgers to the N.C.A.A. tournament in 1999 but was fired in 2001 after the “naked free-throw incident” during his first season in 1997 — players and managers were ordered to run sprints naked after losing a strip free-throw contest — received renewed attention.

Gary Waters nearly took Rutgers to the tournament in 2004. He resigned after the 2006 season, in which he had missed a game against Marquette.

Waters’s replacement, Fred Hill Jr., was fired in 2010 for a profanity-laced tirade directed at Pittsburgh coaches at a Rutgers baseball game. Then came Mike Rice, who then went in a scandal over abusive behavior. Eddie Jordan, a star guard from the university’s 1976 Final Four team, took the job in 2013 after three unsuccessful stints as an N.B.A. coach. He went 29-68.

The program got used to losing and being the butt of jokes in the Big East — the nation’s premiere college basketball conference at the time — before a one-year stopover in the American Athletic Conference in 2013-14. The program’s last N.C.A.A. appearance had been three conferences prior, as a member of the Atlantic 10.

When Jordan was fired, Rutgers had lost 33 of its previous 34 conference games, playing home games in half-empty arenas.

Pikiell, who had risen to challenges before, still wanted the job.

The 53-year-old Pikiell was the architect who had led Stony Brook to its first N.C.A.A. tournament and into a new on-campus arena. As a player at UConn, he was often injured and was a two-time captain when the program finished last in the Big East in 1986-87. The Huskies went on to win the conference title when he was a senior in 1989-90 and advanced to the round of 8 at the N.C.A.A. tournament.

At Rutgers, recalling Calhoun’s advice, Pikiell quickly found players to buy in. The first was Geo Baker, a low-ranked recruit who wore No. 0; Pikiell turned him into a senior captain and a clutch-shot-making all-Big Ten player and the face of the program.

Myles Johnson, another work in progress, crossed the country to join the team and became an academic all-American engineering major headed to graduate school and an all-Big Ten center.

“If you look at Myles when he first came in, I wouldn’t have seen what he is like now,” Baker said of his teammate Johnson, a 6-foot-11, 255-pound redshirt junior. “I have no idea how the coaches saw that vision. They’ve done a great job of just continuing to develop us and make sure we understand the game, while also developing us as people.”

Ron Harper Jr. has an N.B.A. pedigree through his father, Ron, who won five championships with the Bulls and the Lakers, but the younger Harper was also an unheralded recruit. Under Pikiell, Harper blossomed into an all-conference player who is regarded as one of the top small forwards in the country and an N.B.A. prospect.

“I bet everybody on the roster, when they committed to Rutgers, everybody asked them, ‘Why?’” Harper said. “I remember when I committed, when I’d play away games in high school, opposing student sections would chant ‘last in the Big Ten’ and talk trash about Rutgers.”

The Rutgers Athletic Center grew raucous and became one of the toughest places in the country for visiting teams to play. With a program-record 10 sold-out games, including nine straight at the end of the 2019-20 season, Rutgers went 18-1 at home in a 20-win campaign. Then a dream season ended abruptly, as the coronavirus pandemic shut down the N.C.A.A. tournament Rutgers had been striving toward.

It’s real. Rutgers beat Clemson, 60-56, in the first round on Friday — its first N.C.A.A. tournament win since 1983 — and faces Houston on Sunday. The Scarlet Knights continue to win, and Calhoun continues to watch.

“It’s just a matter of vision right now, instead of esteem, which is good,” Calhoun said, adding that he would tell Pikiell: “OK, you’ve got there. The key is, getting there is really tough. Staying there? Sometimes tougher.”