Alabama had a lot to celebrate, so football fans in Tuscaloosa did just that: tossing beer bottles, banners and masks; climbing trees, light posts and one another.

It was as if the backdrop to the title game, a deadly pandemic, did not exist, even though about 250,000 Americans have been found to have new cases of the virus daily over the past week.

On Monday night, the University of Alabama football team won its 18th national championship, beating Ohio State in a 52-24 rout in Miami Gardens, Fla. And just as in previous championship seasons, thousands of fans took to the streets outside the collection of restaurants and bars in Tuscaloosa, Ala., known as the Strip.

Normally, these haunts are student favorites, perfect for cheering a decorated team in the company of strangers united by the pageantry of college football and the allure of celebrating a big win.

But times are not normal, and Tuscaloosa city officials wanted any celebrations to be muted this year. They wanted fans to watch the game in their households rather than in large groups. Coronavirus cases and deaths in the state have gone up, while the availability of hospital beds has gone sharply down.

Alabama has had a 30 percent rise in the total number of virus cases this week compared with two weeks ago, according to a New York Times database, and an average of 67 deaths per day.

“It goes without saying that we are disappointed in seeing the large number of people flood into the Strip area itself,” Mayor Walt Maddox of Tuscaloosa said at a news conference on Tuesday morning.

In Ohio State’s home city, Columbus, by contrast, fans were mostly home by halftime. Much of that was because Alabama was pulling away with the title, but Ohio had also enacted a 10 p.m. curfew. Before that, some fans had spent the first bit of the night distanced from one another in bars. 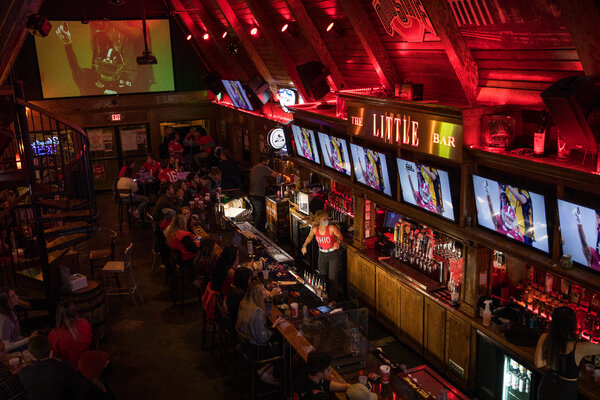 There is no curfew in Alabama. There is a mask mandate and occupancy limits for bars and restaurants.

Fans started lining up to get seats in bars at midday ahead of the game, many of them ignoring recommendations to, at the very least, stand six feet apart to help stem a “post-national championship surge” expected at the intensive care unit of DCH Regional Medical Center in Tuscaloosa.

Once Alabama clinched the title, fans poured out of establishments and homes to party it up.

“We do not have an exact estimate, but we do believe it’s larger than any celebration that we’ve seen in recent memory, and I think it’s safe to say that it was thousands upon thousands,” Maddox said. Officials estimated the crowd to be about 5,000 people.

At the same time, the streets in Columbus were clear, as fans had little incentive to leave their bubbles. Ohio has had a 26 percent increase in new cases in the past seven days compared with two weeks ago, according to a New York Times database. About 80 people died each day.

What was already a break from recommendations turned rowdy in Alabama as fans started clambering over one another, throwing beer bottles at police officers and vehicles.

Officers were able to tamp down the celebration around midnight, local time, about an hour and a half after it had started, by discharging pepper spray on the ground, Chief Brent Blankley of the Tuscaloosa Police Department said.

Still, 14 people were arrested as fights broke out in the crowd.

The spirit of the crowds in Tuscaloosa resonated around the country through social media, making it clear which team won, even to those who did not watch the game.

The next few weeks could tell what the consequences of that celebration might be.