The Atlanta Braves announced on Wednesday that they would allow 100 percent capacity crowds beginning May 7. The listed capacity of their home stadium, Truist Park, in suburban Atlanta is 41,084.

Atlanta will become the second team in Major League Baseball to allow full-capacity crowds at its stadium this season amid the coronavirus pandemic. The Rangers opened their stadium in Arlington, Texas, to a full capacity crowd for their home opener on April 5 — a decision President Biden called “a mistake” and “not responsible” earlier this month. In all, more than 38,000 fans filled the 40,300-seat stadium that day.

In Atlanta, the team began the season hosting crowds of 33 percent capacity and increased that to 50 percent for their late April homestead. Now, they are doubling that.

“We have had great success welcoming our fans back safely to Truist Park,” Derek Schiller, the president and chief executive of the team, said in a team-issued statement. “Our outdoor environment, the demand from our season ticket holders and fans to watch us play in person plus safety measures which are in place make it feel that now is the right time to get back to full capacity at Truist Park.”

The team will continue mandating that fans wear masks at the stadium when they’re not actively drinking or eating — although, earlier this month, that requirement was rarely enforced. The team also said vaccinations and temperature checks will not be required.

For fans who are uncomfortable going to a full-capacity stadium, the team said it would offer credits that can be used for future regular-season games. But there was a caveat: the team said those credits “will need to be redeemed before October 3, 2021.”

Team officials originally said they expected to welcome full-capacity crowds by June, a month before they were set to host the 2021 All-Star Game. But since then, M.L.B. Commissioner Rob Manfred relocated that game to Denver in response to new elections laws in Georgia that Democrats and civil rights groups said would disproportionately suppress turnout, particularly among people of color. The Braves vehemently opposed the relocation of the game and decried Manfred’s decision.

Although the Centers for Disease Control and Prevention eased its guidance on mask wearing for fully vaccinated people outdoors this week, it stressed that masks were still necessary in crowded outdoor venues like stadiums.

New virus cases are noticeably down in the United States, including in Georgia, but the state has one of the lowest vaccination rates in the country.

Last month, new research submitted to The Lancet, a scientific journal, suggested that there was a link between N.F.L. games that had large numbers of fans in the stands and an increase in the number of infections in locales near the stadiums. N.F.L. Commissioner Roger Goodell has said the league hopes to open all of its stadiums at full capacity when the 2021 season starts in September.

Elsewhere in the South on Wednesday, Louisiana State University said it would allow capacity crowds at outdoor sporting events beginning with a baseball game on Friday against the University of Arkansas. L.S.U. also said that it would no longer require spectators to wear masks at outdoor events and, crucially in a state with a cherished game day culture, that it would allow people to resume “normal tailgating activities” with no pandemic-related restrictions.

“This is another positive step for us as a campus and community,” said Scott Woodward, L.S.U.’s athletic director. 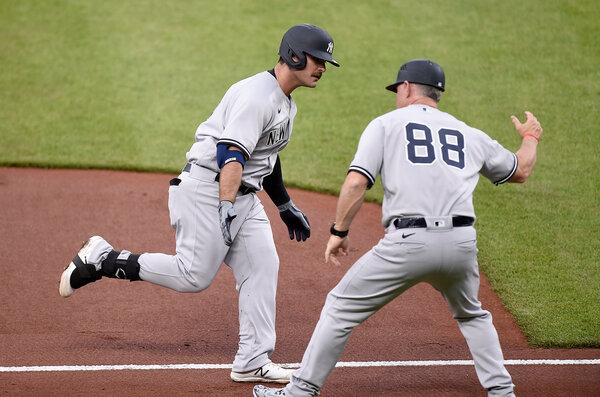 Domingo German won his second straight start, combining with Michael King on a four-hitter, and the Yankees beat the Baltimore Orioles, 7-0, Wednesday night.

Mike Ford put the Yankees ahead in the second inning with his second home run in 16 at-bats this season, an opposite-field drive to left, and cleanup hitter Gio Urshela made it 5-0 with a three-run homer in the four-run third.

Four innings after making a baserunning blunder, Clint Frazier hit his first home run in 69 plate appearances this season, capping the scoring in the eighth with a drive off Tyler Wells.

The Yankees have won five of seven and scored their most runs since getting a season-high eight on April 11. This was their second shutout this season — both have come against the Orioles.

Baltimore fell to 3-10 at home this season.

German (2-2), who missed the 2020 season while serving a domestic violence suspension, beat Cleveland on April 22 for his first victory in 587 days and won his second straight start, lowering his E.R.A. to 4.05.

He allowed three hits and a walk in seven innings with six strikeouts. German didn’t yield a hit until Ryan Mountcastle’s infield single with two outs in the fifth and didn’t allow a runner to reach second until two outs in the seventh, a threat ended when he struck out Mountcastle.

It was German’s longest outing since a seven-inning effort on Aug. 13, 2019 —- the last time he faced Baltimore. (AP)

Phillies star Bryce Harper was hit in the face by a 96.9 mile-per-hour fastball Wednesday night and left Philadelphia’s game against St. Louis.

Harper was drilled in the left cheek by left-handed reliever Genesis Cabrera’s first pitch in the sixth inning. Harper picked himself up and walked off the field, with blood dripping from a cut on the side of his nose.

Cabrera hit Didi Gregorius with another fastball on his next pitch. Phillies Manager Joe Girardi came out of the dugout to argue with plate umpire Chris Segal and was ejected.

Matt Joyce ran for Harper, and Gregorius remained in the game. Cabrera allowed an R.B.I. single to Andrew McCutchen the next at-bat before being pulled. (AP)