Ms Palmer, the only woman to lead Australia’s peak sports governing body since its creation 36 years ago, said allegations being aired against swimming – sexism, misogyny and belittling and fat-shaming of athletes – were symptomatic of a bigger problem Australian sport had failed to address. 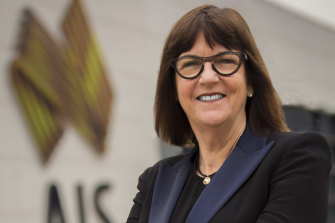 In the wake of the Rio Olympics, where only 15 of 160 Australian Olympic team coaches were women, Ms Palmer identified under-representation of women in senior coaching roles as a “glaring issue” across all sports.

She conceded that in the five years since, little had changed. At the end of this week, when the Australian swim team is announced for Tokyo, it is likely that every coach will be a man. This is despite Swimming Australia running extensive programs designed to push more women into high performance coaching.

“For a long time we have focused on fixing the women, the idea that they need mentoring, courses, a program,” Ms Palmer told The Age and Sydney Morning Herald. “At the end of the day, the system is broken.”

“This is not new. This is the Australian sports system. It has been like this since the early days of the AIS when the organisation was run by men mainly for men and women were treated as second class. There is more to come in all this, I think.” 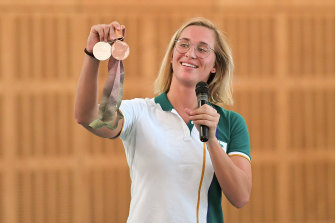 Maddie Groves displays her Olympic medals to students in 2019.Credit:Getty

What began with a social media post by Olympic swimmer Maddie Groves calling out her experience of a misogynistic pool deck culture has morphed into a cultural crisis that is threatening to overwhelm this week’s Olympic trials.

Swimming Australia has defended its integrity processes, which its says are currently being reviewed by chief executive Alex Baumann. In response to questions from The Age and Sydney Morning Herald, it declined to say whether multiple swimmers last year lodged formal complaints against a coach currently in Adelaide for the trials.

“All complaints made to Swimming Australia are made under the understanding of confidentiality,” a spokesperson said. “We are [committed] to providing a secure environment for complainants.”

However, it remains unclear how Swimming Australia intends to investigate specific allegations raised by Groves and others which have emerged in the wake of her posts.

“I definitely made a lot of changes after 2019,” she said after qualifying for her fourth Olympic team. “A lot of people said that I wasn’t going to do it. I was too old. I needed to lose weight, I needed to look different.”

She said her new coach, Michael Bohl had given her renewed confidence in her body. “Two years ago, I didn’t feel comfortable in my togs. And to be here and to feel comfortable again and happy again is just such a blessing,” Seebohm said. 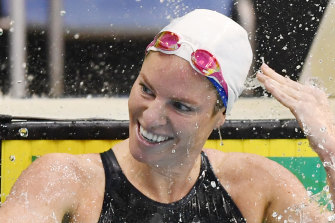 Swimming Australia has said it will establish an independent panel of three women to investigate Groves’ complaint. In the meantime, the sport will come under renewed pressure to sign up to the the National Integrity Framework established by the newly formed government agency Sports Integrity Australia.

This would require Swimming Australia to meet agreed standards in child protection and make use of an independent complaints handling process managed by SIA. The West Australian Institute of Sport has provided about 80 allegations of historic abuse of gymnasts to SIA. The most serious of these has been referred to West Australian Police for criminal investigation.

Swimming Australia agrees it needs more women in coaching. Since the Rio Games, it has appointed women to lead international junior teams, filled about half the support places on all pathway teams with women, and put six women coaches through an advanced coaching program developed by the AIS and Melbourne Business School. 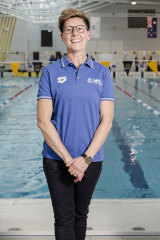 Tracey Menzies is the only woman to coach an Australian swimmer to an Olympic gold medal this century.Credit:Jamila Toderas

Although there are plenty of women coaches on the Adelaide pool deck, none are head coaches in charge of high performance programs. Ms Palmer noted that Tracey Menzies, the only woman to coach an Australian swimmer to an Olympic gold medal this century, left the sport this year after being unable to find a high performance role.

She moved to Brisbane to find work as a club coach and two months joined Gymnastics Australia as an athlete wellbeing and engagement manager.

Instead, that relationship ended in acrimony and Menzies was left feeling discarded by those in charge of Australia’s government-funded high performance programs.

Ms Palmer said the priority given to high performance outcomes — Olympic and world championship medals — by both the AIS and the sports it funds — created a myopic sporting system unable to see, much less properly address, the cultural barriers to women reaching leadership positions in both administration and coaching.

“To break into that boys’ club is really hard. There is no space for you, the environment is not great and if you want to have a life or a family it is even harder.”

“To break into that boys’ club is really hard,” Ms Palmer said. “There is no space for you, the environment is not great and if you want to have a life or a family it is even harder.

“There is not a cohesive strategy in this country for changing women’s participation in leadership in sport. It is all ad hoc.”

She described the AIS, which allocates high performance funding to the sports, as an “organisation which is itself male dominated, especially in the high performance area, and quite misogynistic”.

“I found it extraordinarily frustrating the way women have to have to survive in that system.”

“I found it extraordinarily frustrating the way women have to have to survive in that system.”

Ms Palmer’s influence over Australia’s high performance sports system ended when the Sport Australia board decided to split the organisation in two and place executive responsibility for high performance decisions and programs in the hands of AIS boss Peter Conde.

Ms Palmer left the organisation a short time later. “It had nothing to do with me being a woman,” she said. “It had a lot to do with men, power and politics.”