IVAN TONEY recently discovered his mum skipped meals so he did not go hungry.

The Brentford star is now more driven to get promoted to the Premier League and repay the sacrifices she made while he was growing up in Northampton. 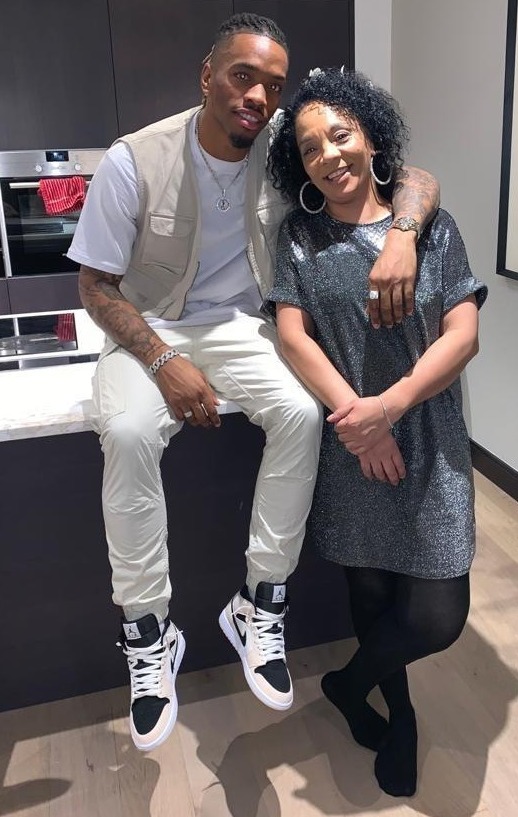 Mum Lisa has been a shining light in Toney’s life but the striker never realised how far she went to give him the best upbringing.

Toney, 25, told SunSport: “My mum has played a massive part in my life.

“From when I was very young, she’d always worry when I was out playing with my friends and wanted to make sure I got home safe.

“There were times when she even skipped meals to make sure I was eating.

“I only found this out a few months back when she mentioned it casually during a family discussion.

“Hearing that makes you realise you don’t always understand what your parents do for you until you look back and think about it.”

Mum's sacrifice was to make sure I was eating correctly, doing good and getting to where I wanted. I can't thank her enough for what she has done for me.

Toney is not someone who emotionally breaks down easily but any son or daughter would be moved by such a discovery about either of their parents.

And he admitted: “I don’t really cry – but hearing that touches you. The woman you love to bits, saying that.

“I reacted, ‘That’s crazy’ but when I thought about it over the next few days, I’m thinking, ‘Wowzers, she’s done that for me!

“Her sacrifice was to make sure I was eating correctly, doing good and getting to where I wanted to.

“I can’t thank her enough for what she’s done and where she’s put me today. Hopefully I can continue making her proud.

“There are things I’d love to give or do for her – but she’s not that sort of woman.

“She just tells me, ‘The way you can repay me is to score a goal and then another goal.’

“It’s only right I repay her for what she has sacrificed and put into me for all these years by getting into the Premier League.” 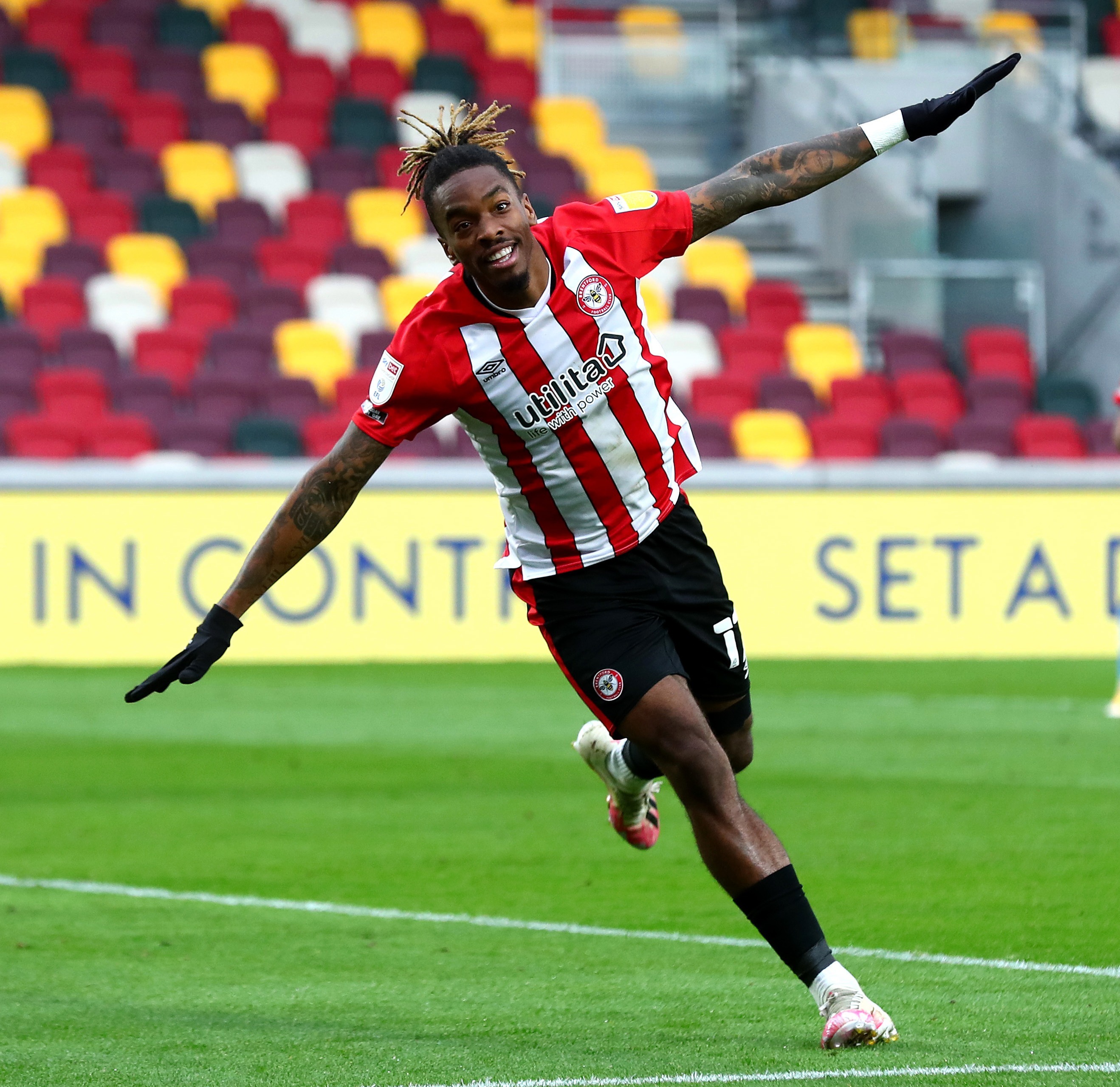 Even today Lisa still likes to take good care of her son – making sure he is getting the best out of himself.

Toney said: “She messages me after games, saying, ‘Don’t let them stress you, don’t let them get into your head’ because she knows how hot-headed I can be sometimes.

“She always tells me, ‘Be the big strong striker you are and put yourself about and do the right things.’

“And even if I score or don’t score, she will be messaging me to make sure I’m good.”

Toney – bombed out by Rafa Benitez at Newcastle after just two top-flight sub appearances – has been the signing of the season.

Picked up for £5million from Peterborough in the summer, his strike in the 3-1 win over Bristol City last Saturday saw him break the Championship top-scorer record with 31 goals as well as win the SkyBet Golden Boot. 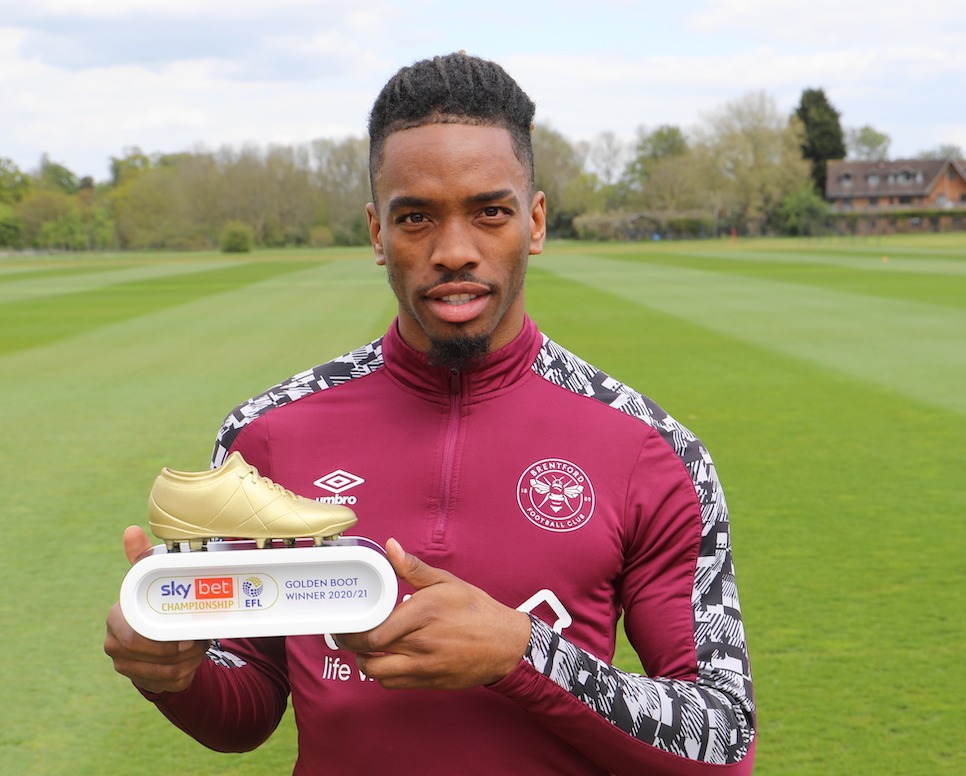 It prompted immediate congratulations from Glenn Murray, who held the record with his 30 strikes for Crystal Palace in 2012-13.

But behind the accolades and deserved acclaim, I ask the man of the moment how he would describe “the real Ivan Toney”?

“I’m confident, a winner, a joker and someone who will help anyone.”

And since I first met him following his 40-yard ‘worldy’ in the FA Cup for Peterborough against Dover in December 2019, every time we have spoken those qualities shine through.

His compassionate nature was shown by him setting up the Ivan Toney St Vincent Volcano Relief Fund to help those affected by the La Soufriere eruption last month, near to where his grandparents were born.

And the striker’s confidence is illustrated nicely by a funny anecdote he shares about his “second favourite goal” this season, the winner against Stoke in February – only beaten by his record-breaking one last Saturday.

He said: “Their manager Michael O’Neill was giving me stick so I told him, ‘I’m going to score and come over to celebrate right in front of you in a minute!’

“And that’s exactly what happened. He was angry and looking the other way – but he did later say, ‘Well done!’” 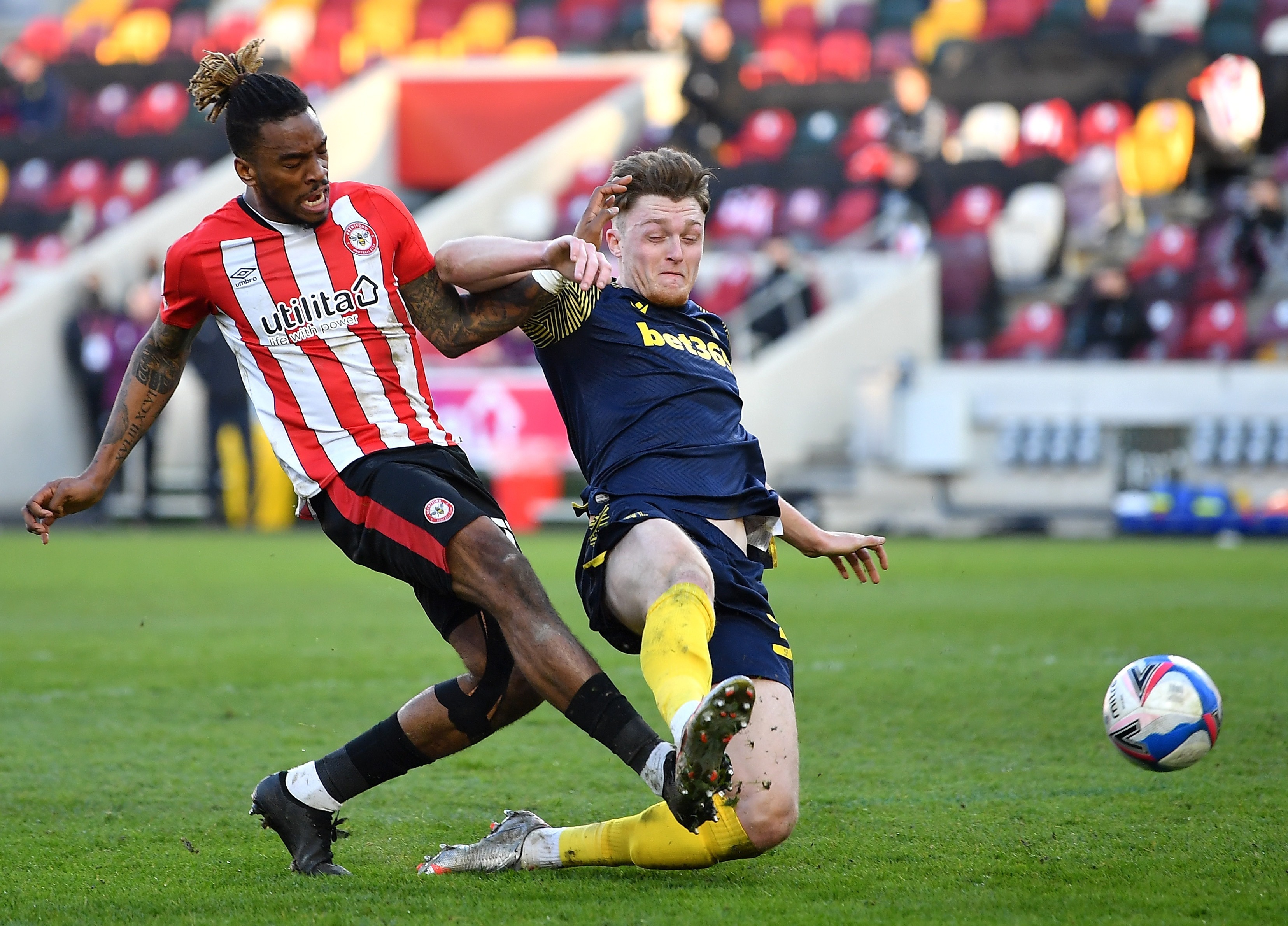 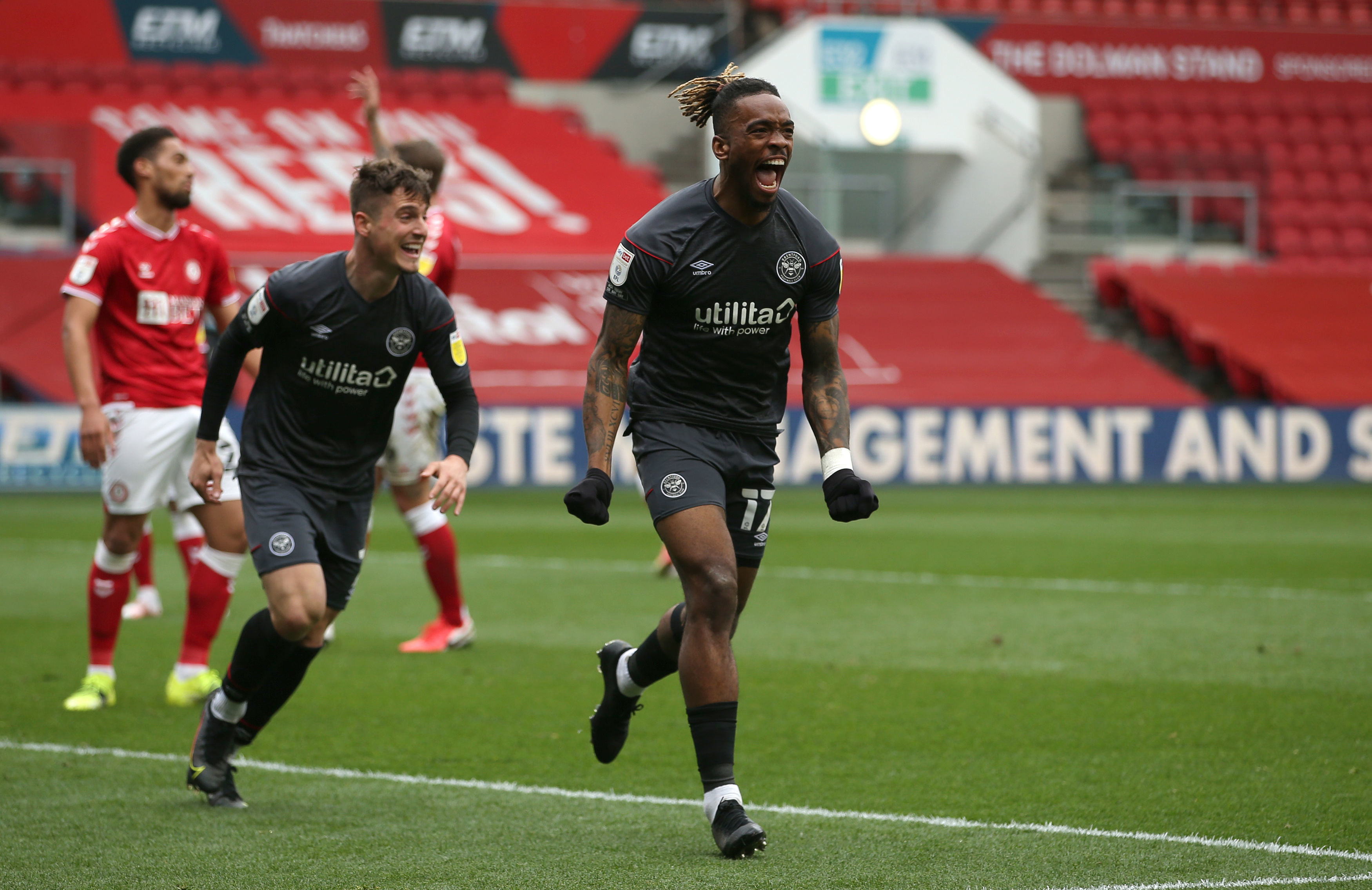 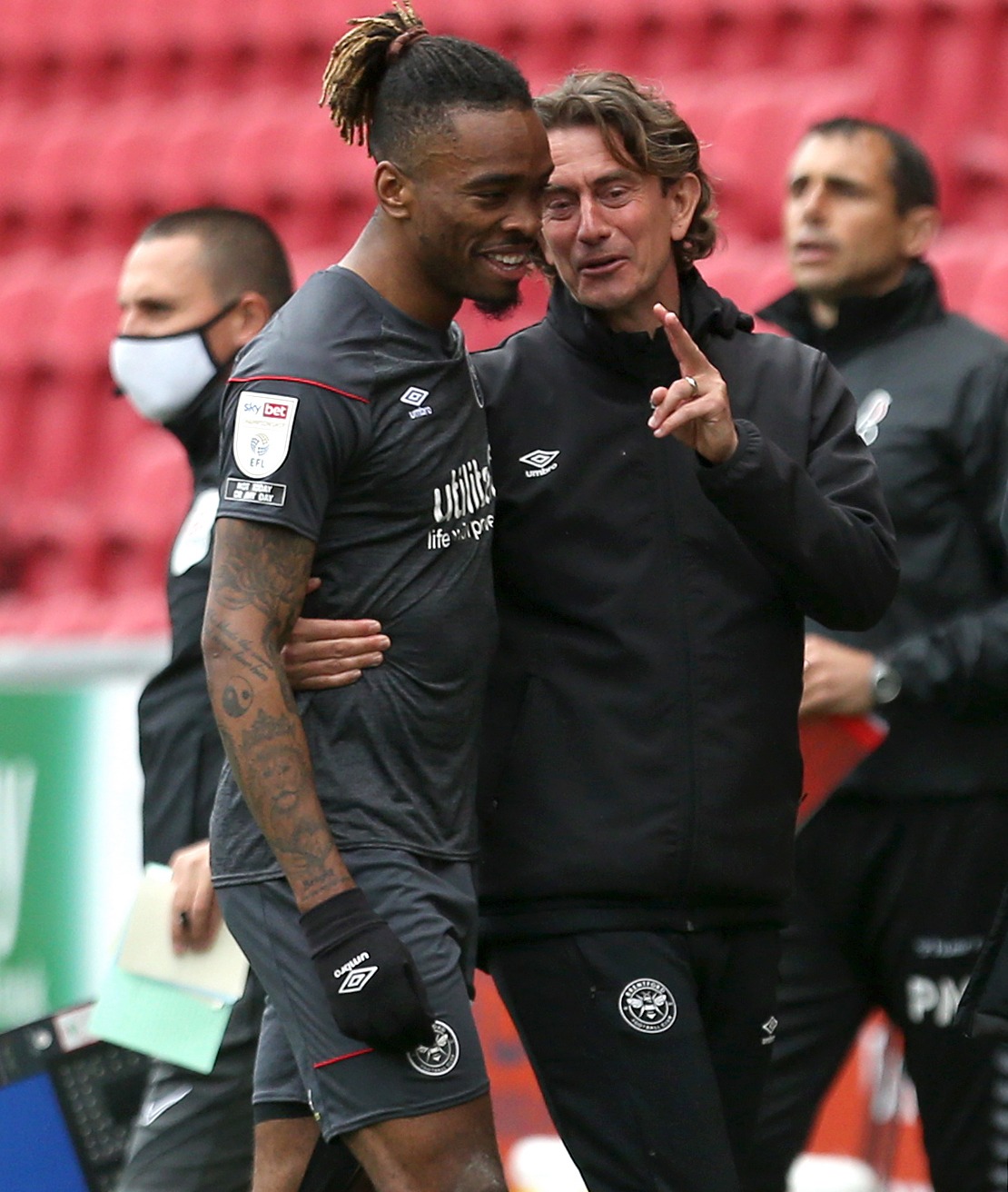 But, as confident as he is, Toney would never attempt doing what his hero Sergio Aguero did last week for Manchester City against Chelsea by attempting a Panenka at such a key moment of the game. The Argentinian had egg on his face as he chipped it straight to Edouard Mendy.

He said: “I’ll do it at some stage during my career but we’d have to be winning 4-0 and I’d have already scored a hat-trick!

“It’s funny because me and my mate – who is a goalie – were having a debate the other day and he told me, ‘Next time you get a penalty, chip it down the middle because keepers always gamble.’

“I don’t know what Aguero was thinking of – a striker like him!

“Even if Mendy did dive because, he’s like 7ft, he’d probably still save it with his foot dangling in the air!”

Such is Toney’s lust for improvement he believes he should have scored FORTY goals after analysing every game and chance he has had – admitting: “A top striker like Harry Kane turns half chances into full chances by scoring them.”

The Brentford striker wants to be at the top of the Premier League tree like Kane.

I also don’t beat myself up after missing a chance because I know I’m going to get another one.”

And Toney uses motivational speakers he watches online and quotations for inspiration. One of his favourites, coined by American Eric Thomas, is: “When you want to succeed as bad as you want to breathe, then you will be successful.”

The striker – in his pursuit for greatness – admits the biggest thing he worked on this season was his fitness.

He said: “At this club, it’s about being on the front foot, pressing and running in behind. The first four games, I was off the pace.

“There were chances that came my way that I weren’t ready for because I was tired from making the run before. I worked on that and have never felt fitter than I have this season.

“I also don’t beat myself up after missing a chance because I know I’m going to get another one.”

Toney’s body is covered by tattoos charting his life and football story – including likenesses of his young son Ivan Jnr and his late grandmother.

So what next on the Toney canvas?

He said: “My mum keeps telling me to stop getting tattoos but I’ll get a few more sneaky ones in. I’ll have to get a 31 with a golden boot next to it.”

Toney revealed he finally got round to performing his initiation song – having threatened to perform a Neil Diamond classic.

But he said: “My audience wouldn’t have appreciated Neil Diamond so I went safe with So Sick by Ne-Yo. They wanted me to perform again but I was full on my bookings so wasn’t available.”

It is ironic that Toney’s replacement at Peterborough Jonson Clarke-Harris has bettered his predecessor’s effort last season with 31 goals and led them to promotion.

While Toney himself has bettered the 25 goals Ollie Watkins scored for Brentford last season.

The Bees ace laughed: “I’m buzzing for Jonson doing better than me. Maybe I was the problem and why they didn’t get promoted!

“If we go up, maybe Ollie can say he was the reason why Brentford didn’t get promoted!”

What was going through your mind when it looked like Sergi Canos might get to the ball ahead of what was your record-breaking goal?

In my head it was, 'tackle Sergi if he takes it off me and we will go from there.' But he left it for me

You could see what it meant to all the boys because they all came over and celebrated. It meant a lot.

What has it been like playing for Thomas Frank?

He has kept me focused. He’s always saying to me, “Be confident, be humble” and I feel like I have been like that throughout the season.

I know if a chance comes my way, I am going to take it.

When I cross the white line, I think, “I am going to score today.”

That is the confident part and being humble is not telling anyone or bragging about it. You are thinking it but keeping it to yourself.

On a personal note, he is like a friend. He’s always genuinely asking how people are, how their families are? He does genuinely care and it’s good to have a manager like that.

Do you have any superstitions?

As a Christian, I always pray before the game. My nan has a little prayer that she always said to me before matches – so I do it every game now.

I also always put my right boot on first before my left. I don’t know why. I just feel like it’s a must – maybe because I am right footed.

Do you study Premier League strikers while watching games?

I watch clips from some strikers. When I am watching a game, I watch a striker’s movement.

It might be a bit boring for everyone else but it helps my game and I am trying to be a better player all round. These little things help out.

Who is the Premier League striker you most admire?

It was Sergio Aguero with just the way he is in front of goal. He’s just so clinical – one opportunity, you know 9 times out of 10, it's in the back of the net.

But more recently, it has to be Harry Kane – you see how deadly he is in front of goal.

There was a game I saw where he had two chances and he put them into the back of the net.

He makes half chances full chances. That is what good strikers do.

And Harry’s link-up play – along with his goals and assists – is incredible.

He is someone anyone can look up to – not just myself but any striker. If you take some of his game into yours, you are going to be a good striker.