MARTIN SAMUEL: Don’t you dare paint Bukayo Saka and Co as the bad guys. Look at the thugs who shame the nation… It’s England the country – NOT the team – who can’t handle a final

The biggest problem for English football is not tactical or technical, and it is certainly not taking the knee.

It is there, scrawled on the mural image of Marcus Rashford in Withington, or on the Instagram feed of Bukayo Saka.

It is the broken glass piercing the soles of shoes tramping down Wembley Way, the frightened faces, the ugly scenes of violent confrontation that follow English football, even towards the pinnacle of achievement. They’re not the bad guys, the ones who missed the penalties. They did their best. 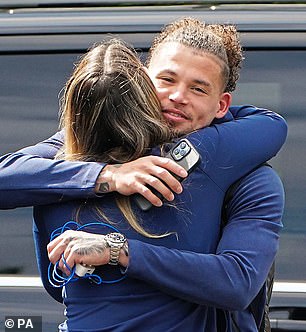 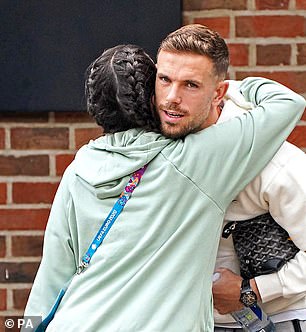 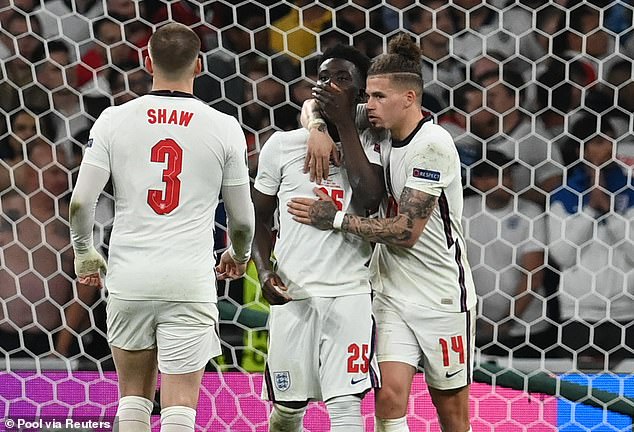 An example of the biggest problem with English football was seen on the Instagram feed of Bukayo Saka (centre), who was racially abused after seeing his penalty saved in the final

Many, too many to airily dismiss as a minority, did their worst. Behaved with an absence of empathy for their fellow man, bullied them out of their place in the stadium, then poisoned the discourse in the aftermath.

Not that this was a reaction to defeat. Long before the fateful fifth penalty, the atmosphere outside Wembley was foul and disturbing. The players who missed would have known what to expect.

It wasn’t so long ago that they were a free hit, their beliefs dismissed as gesture politics by Government ministers who then postured and preened in their newly unwrapped England shirts, the creases still visible in their carefully staged photo captures.

Priti Patel and Boris Johnson were outraged by the social media abuse of England’s black footballers on Monday, the result of a hostile culture to which they had contributed with their lack of support before the tournament began.

Taking the knee, then, was just another battleground in the culture war, and questioning its sincerity another vote winner in the march on Hartlepool or Batley and Spen. Now, they tiptoe away from the carnage.

Some brazen it out. Nigel Farage, who called Gareth Southgate out of touch with England’s fans, falsely linked the players’ anti-racist stance to Marxism and demanded politics be kept out of football, then posed outside an empty Wembley wearing a Cross of St George waistcoat on the day of the game. Shameless, all of it.

And in the middle, Southgate. Still feeling like his stomach had been wrenched out by a plain old football match, but as ever required to resolve a crisis not of his making. He spoke of the procedures the Football Association had in place to help those players who had been racially abused, spoke of his personal revulsion. 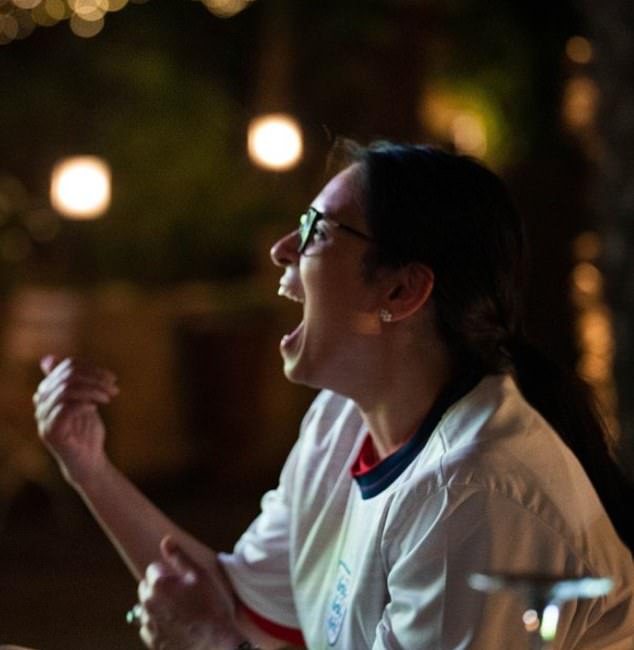 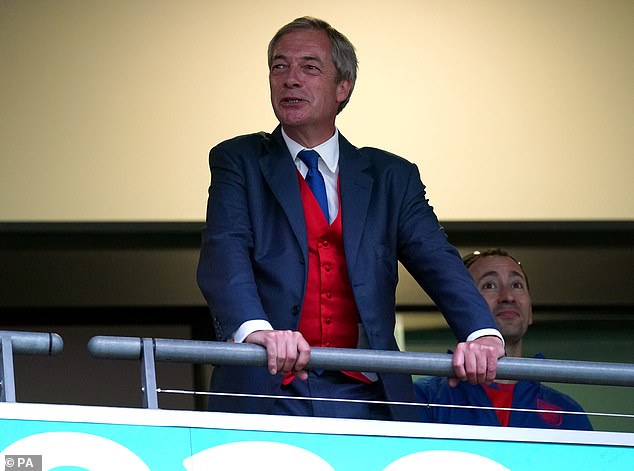 Nigel Farage demanded politics be kept out of football, then posed outside an empty Wembley wearing a Cross of St George waistcoat on the day of the game in a hugely hypocritical move

One day, maybe, England will be able to lose a football match without this attendant ugliness, like an adult football nation. The worst of Sunday night and on Monday morning was not just obnoxious and threatening but infantile.

England – the country, more than the team – couldn’t handle the stage and what it represents. Couldn’t handle a final. And no, not you. You were impeccable. You let no one down. But do you ever look around and feel just a little, well, alone? That’s the clue. It’s quite big, this minority.

So Southgate sifted through the wreckage of what has been, for the most part, a successful campaign, and began to consider what it means to win. Two finals, 55 years apart. That’s not winning.

The winners in football are those who tread that path so often, they can even afford to lose. Not the players. Jorginho didn’t take his penalty lightly because of a victory that happened in 1934.

Yet the regularity with which Italy travel deep into tournaments, that they appear in finals, winning and losing, makes for a stronger, more resilient football culture. There are four stars above the crest on the Azzurri shirt, representing the four World Cups.

There were also two lost World Cup finals – including one on penalties to Brazil in 1994. And to go with their two European Championship victories are two final defeats, one of them by a four-goal margin.

Yet this can happen in tournaments. Germany have lost as many World Cup finals as they have won – four – and as many European Championship finals, too: three. 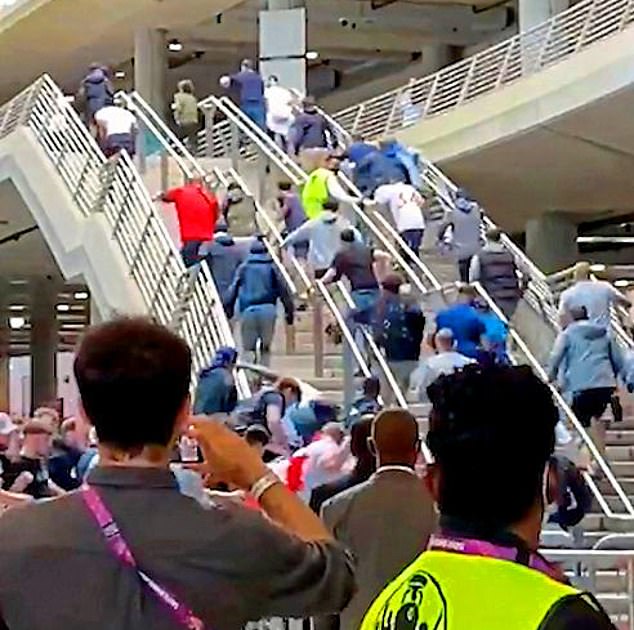 England, the country more than the team, couldn’t handle the stage and what it represents 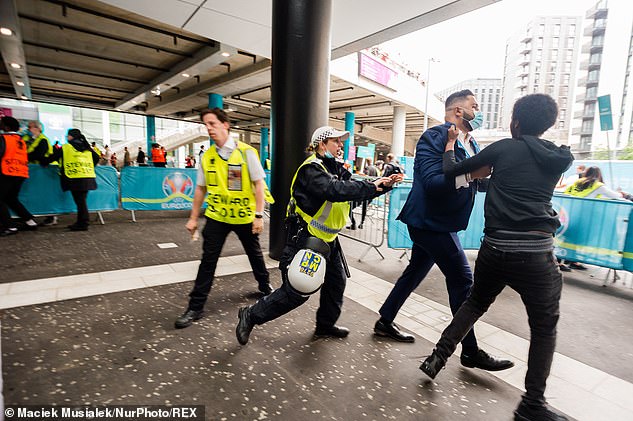 So Kipling applies. The imposters, triumph and disaster, treated just the same. That is the place where England need to be, but it is hard, with finals centuries apart. ‘Be more Germany’ is a lot easier said than done.

‘I remember when we looked back at Germany’s win in 2014,’ said Southgate. ‘They had been to semi-finals, including a semi-final in their own country when they hosted in 2006, and the pain of that defeat, but also the experience of it, was important.

‘If you want sustained success you have to be constantly evolving, improving, finishing in those latter stages and most teams that win do this. France went through what we are feeling now in 2016 and won in 2018; Germany, Spain went close a couple of times before they won. That is part of the process.

‘So we’ll go again but, of course, it’s easy to say things like, “Oh, we can go to Qatar now and win” – it’s a bit glib, really. That’s a long journey. We’ve still got to qualify, we’ve still got steps to take. Then you’ve got all the complexities of beliefs in players throughout the qualifying period, because you’re starting a cycle again.

‘But the fact we’ve had the first signs of consistency – semi-final, then final – that has to be a step in the right direction. It’s not ultimately where we want to finish and when you are so close that’s even more painful.

‘It feels like my stomach has been ripped out this morning. But I know when my logical brain comes back to life in a few days there is a process we have to go through and we have got to continue that. Whoever is here, whoever is at the FA, whoever is at St George’s Park.

‘That’s what we have to build, that’s the vision and we are showing signs. All those things must align because any part of that football pyramid that isn’t strong affects the national team.’ 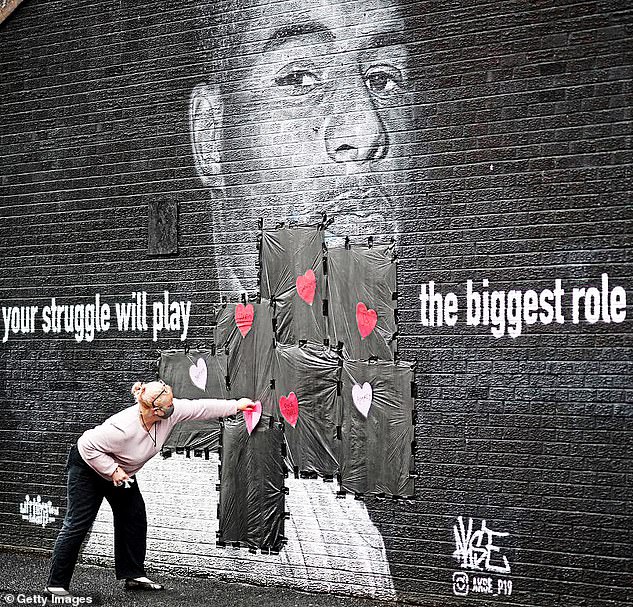 And that’s the hurt really. Knowing all the elements that did align to take England this far and realising how hard it is to repeat that process time and again, as the best nations do.

Just to earn the right to feel this pain, England had to defeat the World Cup runners-up, win their first European Championship knockout game and eliminate Germany from a major tournament for the first time since 1966.

England enjoyed home advantage in all but one game, too, which will also be missing for the remainder of Southgate’s tenure. He sounded as if Qatar 2022 may be the last of it for him, but then again this is a man speaking the morning after a final defeat.

Given all he was dealing with as a result, we shouldn’t perhaps read too much into a general weariness. He said he needed a rest, and that was plain.

After the last World Cup his family took great delight in capturing England’s manager in various states of repose, his ability to drop off at any given moment a sign of the mental exhaustion that goes with the job.

There will be those, too, who think Southgate gets an easy ride. That because of his inherent decency he is not held to exacting standards.

Yet the fact is, he is doing better than previous managers. He escapes criticism because this is an improvement for English football. They should have gone out in the round of 16. 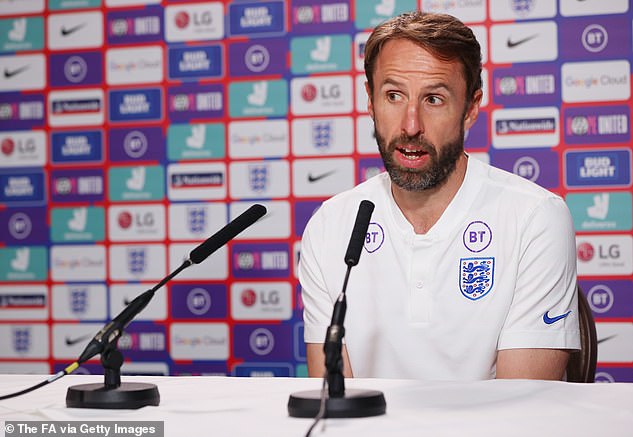 That brought the fixture against Germany, and every knockout stage meeting since 1966 had ended in elimination. So forget home advantage, forget golden generations, to reach the final exceeded logical expectation.

Put to Southgate that he and his team might be too nice to go the distance and win, it was the one time he bristled. ‘Well, I don’t see that,’ he countered.

‘We’ve got to a final for the first time for 55 years and I’m not sure a nice team gets to a final. We’ve overcome a lot of hurdles we haven’t in the past.

‘We have a lot of players who are still very inexperienced and have delivered at an incredibly high level. Germany had an experienced team, so to come through that match and a semi-final was hugely challenging.

‘And we’ve taken Italy, who are a top, top team and unbeaten in 34 games, right to the wire. If we’d been torn apart, or looked a mess, I might be thinking differently. But I won’t just dive into things that aren’t reality and aren’t the reasons we didn’t win.

‘It’s easy to throw theories around but it’s important to reflect carefully when you’re the coach, because I don’t want to go along with narratives that probably aren’t correct.’

To paraphrase: no more Mr Nice Guy. Although England could do with a few more of them when the final whistle blows.