A young footy fan alleged bashed with a didgeridoo is ‘in a bad way’ in hospital with a fractured skull after one of the AFL’s night of nights turned ugly.

The annual Dreamtime clash between Richmond and Essendon at the Melbourne Cricket Ground has been soured by a series of fan-related incidents, which saw at least 50 supporters kicked out of the ground on Saturday night.

The worst of the incidents outside the MCG post-match left a Tigers supporter with serious facial injuries and requiring surgery.

Shocking footage shows the fan walking along the path before he’s confronted by another male who allegedly strikes him in the head with a didgeridoo. 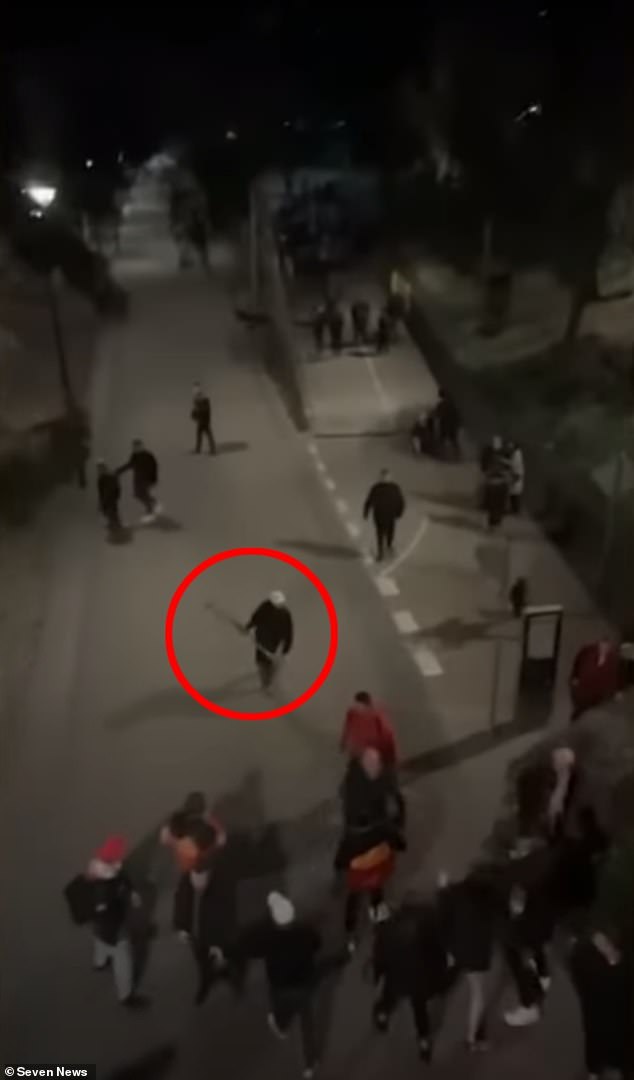 The annual AFL Dreamtime clash was marred  by a spate of disappointing incidents, including fans allegedly attacked outside the ground with didgeridoos

The fan is floored by the alleged attack and loses his balance while trying to get back on his feet, collapsing to the ground again.

Daniel, 25, was set upon ‘out of the blue’ by ‘six or seven teenagers with didgeridoos,’ in an unprovoked attack, according to his distraught grandfather Robert.

‘Daniel was the one that copped the full brunt,’ an emotional Robert told 3AW Breakfast on Monday.

‘They bashed him over the head, to the ground, and then when they’d finished, because people were screaming and they ran off, one of them spat on him.’

‘It was completely unprovoked.’

Daniel was one of three fans injured in the alleged attack now being investigated by police.

He suffered two skull fractures, while his left eye is ‘the size of a golf ball’.

He required stitches to his forehead and will have surgery on his badly broken nose on Monday.

‘He’s in a bad way,’ his grandfather added.

Shocked witnesses were left disgusted by the sickening attack.

‘It was very bad, I thought he would of died from the way he fell and the way the guy knocked him with the didgeridoo,’ a witness told Seven News.

‘I was worried for me and my mates because who knows what they could of done to us.’

His mate added: ‘It was disgusting. When I was there, my heart was beating so fast.’ 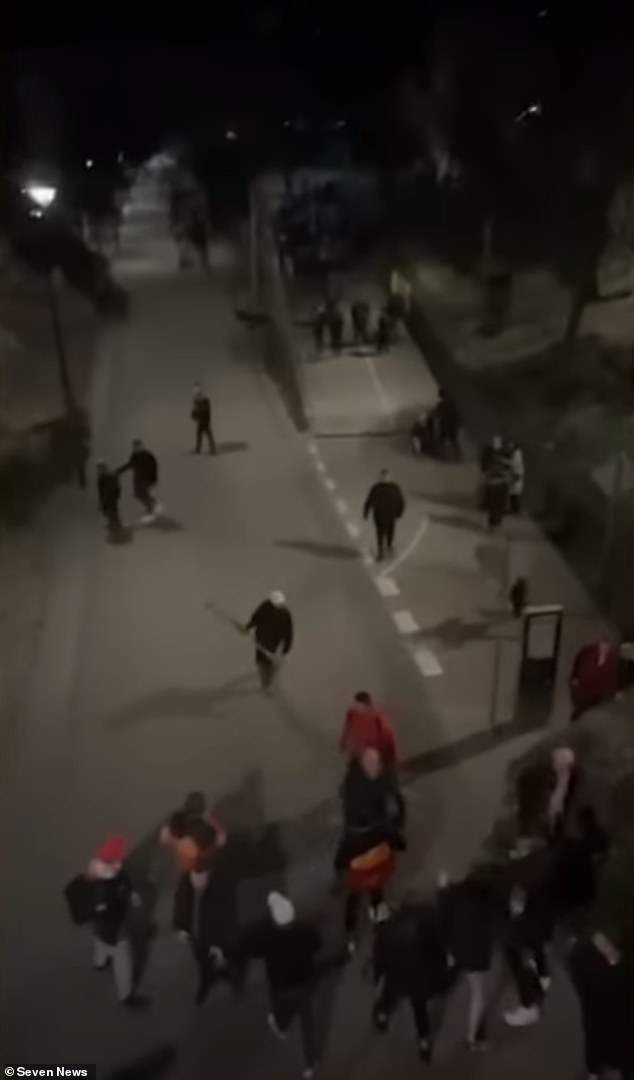 Two pitch invaders, violence in the stands and a wave of evictions took the gloss off the showpiece of the AFL’s celebration of Indigenous Australia at the MCG.

The Dreamtime at the ‘G clash between Richmond and Essendon turned sour from the three quarter time break, when two spectators invaded the pitch – before a brawl broke out in the fourth term.

Victoria Police said more than 50 people were evicted from the ground during the match and two officers were assaulted.

They allege a 21-year-old man bit an officer while being taken away, with another man capsicum sprayed after allegedly punching an officer.

Footage taken by a fan shows security staff struggling to contain a pitch invader dressed in Tigers colours inside the 50-metre arc – then, as the offender is being led away, another person dressed in Richmond gear jumps over the fence and is wrestled to the ground by two more guards.

A violent clash broke out between two groups of men near the Tigers’ cheer squad in the fourth quarter, according to a report in the Herald Sun, and another fan video showed three men being taken out of the ground by police. 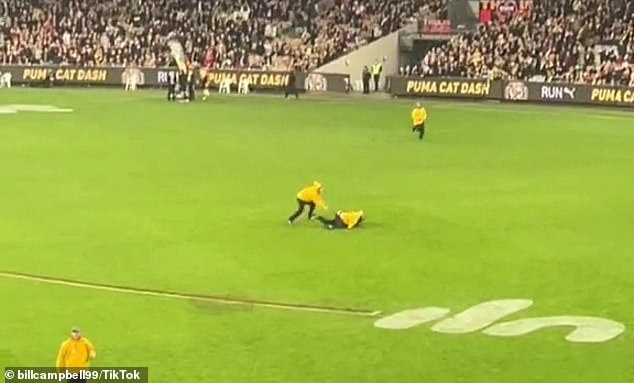 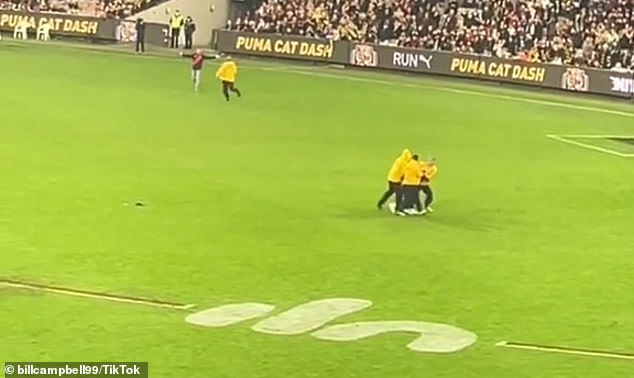 As the staff got the first invader under control, a second fan jumped the fence and ran onto the field (top left)

Todd Davey, who took the footage, said the game was a ‘genuine magnet for morons’.

A Richmond supporter at the game told the publication up to seven people were removed from the stands near the Tigers cheer squad.

‘I witnessed at least one physical fight and several verbal altercations,’ the fan said.

I’ve never seen so many police and security at the MCG. They definitely had their work cut out for them.

‘There must have been something in the air last night because people were just crazy.’ 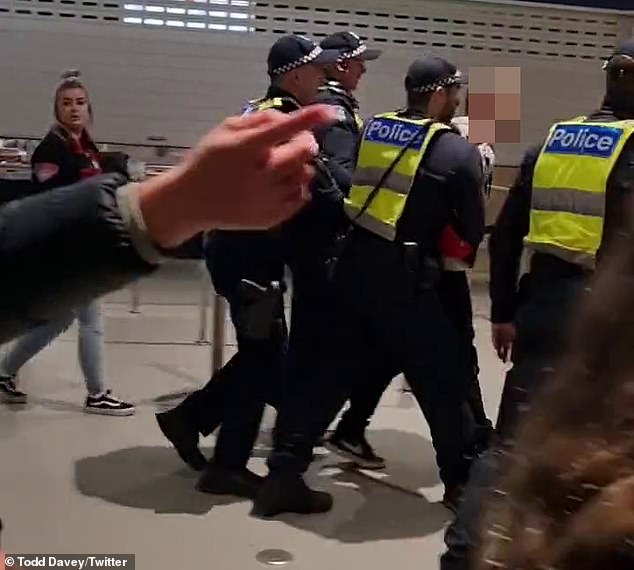 One of three fans who were evicted from the stadium by police is seen being led away. No arrests were made but officers are investigating an assault outside the ground that injured three men, with one going to hospital 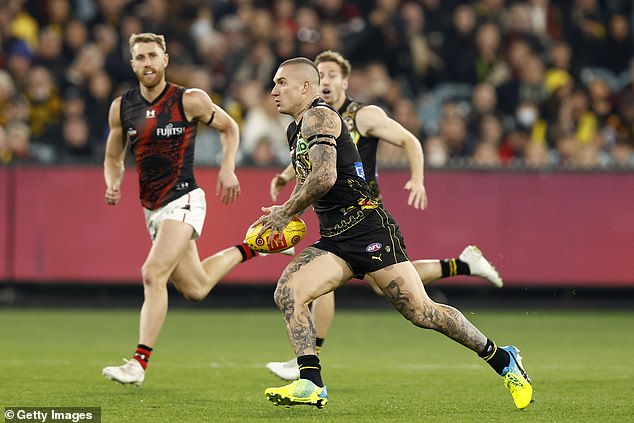 Police blamed fans drinking heavily before the game for the violence.

‘We did see what appeared to be higher levels of alcohol consumption and aggression. It was noticeable that ‘pre-loading’ of alcohol prior to the game was significant in contributing to more incidents of poor crowd behaviour than usual,’ said Inspector Jamie Templeton.

Officers are investigating an assault that occurred outside the MCG and injured three men, witch one taken to hospital.

The incidents occurred against the backdrop of a great Dreamtime at the ‘G match won by Richmond, whose players got involved in the pre-game War Cry in what was one of the biggest highlights from the Sir Doug Nicholls Round.

Richmond midfielder Marlion Pickett played a part in designing the guernsey the Tigers wore on Saturday night and took part in the pre-game ceremony, despite being banned for a week for rough conduct.

Speaking on Fox Footy, former Brisbane Lions great Jonathan Brown described the celebration was one of the highlights of the season and highlighted the significance of Pickett being allowed to take part in the ceremony.