With the N.C.A.A. men’s basketball tournament set to start in earnest with 16 games on Friday and 16 more on Saturday, you’ve probably already consulted various hoops gurus, checked in with your friends and either filled out a bracket or entered an office pool — maybe both.

If you’re wondering what the “experts” are saying, here’s what you need to know.

On Thursday, I previewed six potential first-round upsets to watch, including two involving No. 12 seeds: Winthrop over Villanova and Georgetown over Colorado. Over all, 12th seeds are 50-90 against fifth seeds, with three wins the last time the N.C.A.A. tournament was played in 2019.

“Winthrop is a dangerous team,” Seth Greenberg, the ESPN analyst and former coach, said on air Sunday. “Talk about a team that plays fast. They explode up and down the floor. This team rebounds the ball. Toughness.”

In terms of the big picture, I like Gonzaga to win six straight games and become the first undefeated men’s champion since Bob Knight’s Indiana team in 1976.

I’m not going out on much of a limb there. Former President Barack Obama has the Bulldogs beating Illinois in the championship game in his bracket. He had every No. 1 seed in the Final Four, with Baylor and Michigan losing in the national semifinals. Obama has Cade Cunningham, the projected No. 1 pick in the N.B.A. draft, and Oklahoma State losing to Ayo Dosunmu and No. 1 seed Illinois in the round of 16, but I beg to differ. I like Oklahoma State to go on a deep run, at least to the Final Four.

Obama also has No. 13 Ohio upsetting a No. 4 Virginia team dealing with virus-related issues, and No. 10 Rutgers toppling No. 7 Clemson in the program’s first N.C.A.A. tournament appearance since 1991.

“I think Rutgers has the chance to advance not only this game but potentially past this game,” said Greenberg, who won nearly 400 career games at Cal State Long Beach, South Florida and Virginia Tech. “I really like their team.”

Greenberg has Baylor winning the championship. As for his ESPN colleagues, Jay Bilas and Dick Vitale both picked Coach Mark Few and Gonzaga to win the program’s first national championship, while LaPhonso Ellis chose Baylor.

No other team, Bilas said, can stop Gonzaga’s top three players: Jalen Suggs, Corey Kispert and Drew Timme. And their fourth-best player, Joel Ayayi, has the only triple-double in program history.

It’s worth noting that Gonzaga has already beaten the second, third and fourth seeds — Iowa, Kansas and Virginia — in the West region this year. The Bulldogs scored 102 points against Kansas back in November. They dropped 99 on Iowa, which features the National Player of the Year favorite Luka Garza, and 98 on Virginia, the 2019 champion. So it stands to reason that the Bulldogs will feel confident against any and all of those teams should they meet again.

Greenberg and Ellis, the former Notre Dame star, are going against the grain with Baylor, which was undefeated for much of the season and won the Big 12 regular-season title under Coach Scott Drew.

Assuming Jared Butler and the Bears get past No. 16 Hartford, they could have a tricky second-round game against either North Carolina or Wisconsin. Ellis said the Tar Heels “could make it interesting” for Baylor. 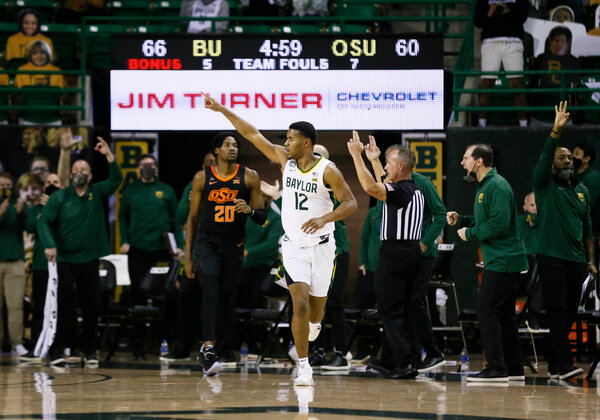 “If North Carolina is able to get past Wisconsin, that’s a lot of offensive rebounding for Baylor,” Ellis said. “As good as they are defensively, they are very tall.”

He said he thought North Carolina could create problems for the Bears if they can “dominate the boards and they can keep their young backcourt from turning the basketball over.”

Cunningham and Oklahoma State were probably underseeded at No. 4, and now they could get No. 1 Illinois in the round of 16. That could spell an early end to Cunningham’s college career as he heads off to the N.B.A. draft, or it could be a chance for him to shine on a huge stage in front of his 2-year-old daughter, Riley, and trigger the upset.

Even before that, the Cowboys open against a tough Liberty team (23-5) and then could potentially face Southeastern Conference power Tennessee (18-8).

“If I picked one team that got the worst draw: Oklahoma State,” Bilas said.

Mike DeCourcy of The Sporting News, a longtime college basketball writer, likes Gonzaga to beat the SEC regular-season and tournament champion, Alabama, in one national semifinal, with Illinois topping Purdue in the other. He has Gonzaga over Illinois in the final, just as Obama does. Picking Purdue to make a run is a shrewd move, as the Boilermakers will be playing all the games in their home state.

“The Zags have been the best team in the country since the season began,” DeCourcy wrote. “And though their dominance of the West Coast Conference has been even more overt than usual because they weren’t forced to cope with all those crazed crowds in bandbox gyms, the W.C.C. final against B.Y.U. showed they could be resilient.”

Of course, it’s always wise to check in with Nate Silver over at FiveThirtyEight. He has Gonzaga with a 43 percent chance of making the championship game and a 28 percent shot of winning the title. Illinois, the Big Ten tournament champion, is next at 27 percent odds to make the title game and 15 percent to win it.

Among the No. 2 seeds, Iowa has a 6 percent chance to win, Houston has a 5 percent chance, Ohio State is at 4 percent and Alabama is at 3 percent.

Cunningham and Oklahoma State stand less than a 1 percent chance, per FiveThirtyEight. In the last 10 years, only two No. 1 N.B.A. draft picks made the Final Four: Anthony Davis in 2012 and Karl-Anthony Towns in 2015, both with Kentucky. Davis is the only one to win the title in that span.