ATLANTA — As the Olympic rosters for men’s golf were finalized on Tuesday, three top-12 invitees had respectfully sent their regrets. Joining the world No. 2, Dustin Johnson of the United States, who confirmed his decision in March, were the 11th-ranked Tyrrell Hatton of Britain and the 12th-ranked Louis Oosthuizen, the South African who finished second in the past two major tournaments. Oosthuizen said family commitments were partly responsible for his decision to bypass the Games, especially after his recent purchase of an 86-acre horse farm in Ocala, Fla.

For Sophia Popov, family considerations explain an enthusiastic embrace of the chance to pursue a pandemic-delayed Olympic gold medal. Popov, 28, who holds dual American and German citizenship, has secured a spot in the 60-player competition, representing Germany and realizing a dream that, for different reasons, eluded her maternal grandmother, her mother and her older brother.

“The Olympics is a huge deal for me,” Popov, the reigning Women’s British Open champion, said Wednesday.

This year, as in 2016, golf’s shallow roots in the Olympics are being exposed by the men’s limited interest. The women are a different story, fiercely jockeying for spots in the field, which will be finalized after this week’s KPMG Women’s P.G.A. Championship. The top 15 players in the world are eligible for the Olympics, including up to four players from a single country. The rest of the field is filled according to the rankings, with a maximum of two players per nation.

Because of the country caps, Popov, the 22nd-ranked player, is set for the Tokyo Games, while Ally Ewing, ranked 18th, is one of several Americans who could, with a victory this week at Atlanta Athletic Club, vault over the fourth U.S. player, Jessica Korda, who is ranked 13th, 10 spots behind her younger sister, Nelly. In between the Korda sisters are the Americans Danielle Kang at No. 6 and Lexi Thompson at No. 7.

“It’s going to take good golf this week, but it would obviously be a huge honor,” said Ewing, 28, who won her second L.P.G.A. tour title last month. “I think one of the coolest things for me, aside from being an Olympian, would just be walking beside other Olympians like Allyson Felix and just people I’ve watched on TV for so many years.”

Because of the coronavirus pandemic, the Olympics will proceed in a severely stripped-down version, with limited crowds, no international fans and restricted movement between venues for athletes and other members of the Olympic contingent.

“I think one of the big things is the experience of the Olympics and what I was able to do won’t be possible for guys this year,” said Rickie Fowler, who competed in the men’s event in 2016, when golf returned to the Games for the first time since 1904. Fowler, speaking Wednesday in a remote news conference from this week’s PGA Tour stop in Connecticut, added, “The Olympics in general are not going to be the same experience.”

The women don’t care. They appreciate what the Olympics can deliver: the opportunity to compete in front of the largest global audience in sports. 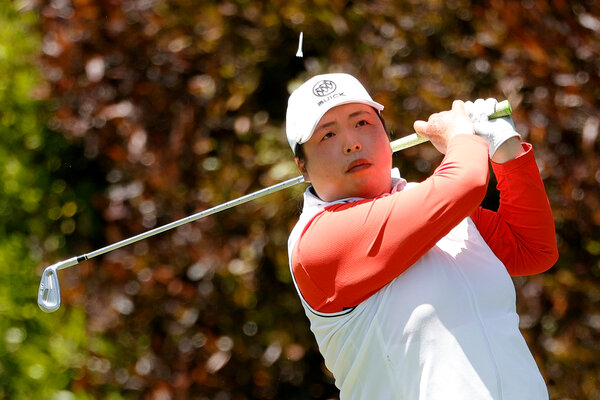 “I think it was a great chance for us to actually play on the same golf course as the men and just to show the world how good the ladies golfers are,” said Shanshan Feng, the 2016 bronze medalist from China.

She added: “I think we should do everything that we can to support the game and ladies golf. I wouldn’t be surprised to see maybe most or even all of the ladies that get in go to Tokyo.”