Kaylee McKeown has claimed Australia’s first-ever gold medal in the women’s 200m backstroke, while Emily Seebohm has picked up bronze at her fourth Olympic Games.

After claiming gold in the 100m backstroke earlier this week, her first Olympic medal of any colour, McKeown turned at the halfway mark on Saturday in second place. 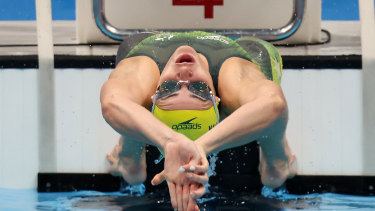 McKeown’s win was Australia’s seventh in the pool, the team now just one behind its highest ever swimming haul of eight at Melbourne in 1956. The seventh gold equals Australia’s mark set in the pool at Athens.

Nicole Stevenson is the only other Australian to win a medal in the women’s 200m backstroke, which has been in the Olympic program since 1968.

Stevenson won bronze at the Barcelona Olympics of 1992.

McKeown pulled out of the 200m individual medley event despite being the No.1 ranked-swimmer in the world to focus on her two backstroke races. Her decision was certainly justified given her brilliant swims in the 100m and 200m backstroke finals.

The 20-year-old posted a new Commonwealth record time of 2:04.28 at the Olympic trials in the 200m backstroke, which was the fastest of 2021 and certainly sent a message to her competitors.

Temple, along with McKeown, will swim in the mixed 4x100m medley relay today.

Australia qualified fourth fastest for the mixed relay final and have named McKeown, Zac Stubblety-Cook, Temple and Emma McKeon in their line-up.